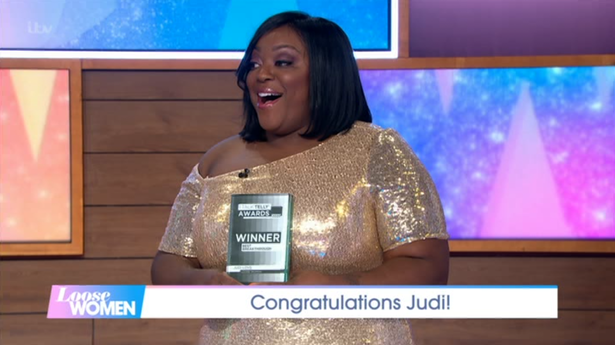 Loose Women ‘s Judi Love was overwhelmed with joy as she made an announcement on Tuesday’s show that she had won a TVaward.

Judi won Best Breakthrough Act of 2020 at the iTalk awards, and she dressed up in a stunning gold gown to celebrate the news.

She walked on to the panel while congratulatory music played and fellow panelists Ruth Langsford, Janet Street Porter, and Gloria Hunniford applauded.

Ruth announced: “A few weeks ago, we revealed that Judi was up for the Best Breakthrough trophy at the iTalk telly awards.

“A few of you getting in touch commenting that all the members of Steps were sitting next to each other,” she said.

“That’s because they’ve created their own bubble because they are working together and they are being tested regularly, so don’t worry about that, it’s all above board.”

Ruth was hosting the show on Tuesday after Andrea McLean sensationally quit the show live on air on Monday and burst into tears.

Emotional Andrea said she was leaving the show after 13 years to focus on projects that help support women including on her website.