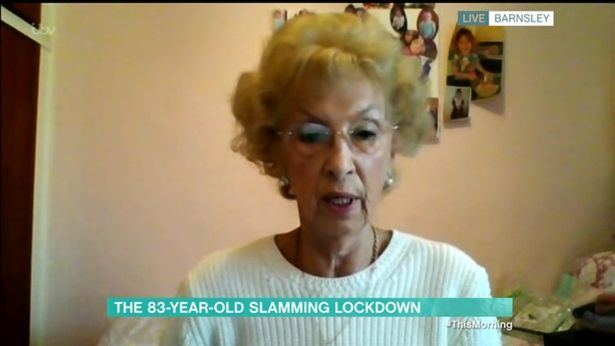 A pensioner who hit headlines this week by saying she ‘didn’t give a sod’ about the Tier 3 lockdown imposed on her hometown, has revealed she suffered coronavirus symptoms and ‘didn’t follow the rules.’

Barnsley native Maureen appeared on Friday’s This Morning to discuss her defiant attitude to the government’s latest guidelines after her BBC news interview became a viral hit.

Speaking via video call to Alison Hammond and Dermot O’Leary, Maureen admitted she’s ‘not been in lockdown at all’ while also admitting she suffered the symptoms associated with COVID-19 herself.

“I’m 83 I’ve never been lockdown and I don’t think we should be in lockdown. The government have got it wrong,’ insisted Maureen.

Maureen hit the headlines this week as she revealed her fears for the country when it was announced her home region was entering a Tier 3 lockdown this weekend.

She warned it would be the young who would end up paying for the restrictions in the long run and ‘not me as I’ll be dead.’

She told BBC News: “I think it’s all ridiculous, we should never have been in lockdown. All the people who were vulnerable should have been helped and kept home safe.

“I look at it this way, I’ve not got all that many years left of me and i’m not going to be fastened in a house when the government have got it all wrong.

“We need…how can we get the country on its feet? Money-wise? Where’s all the money?

“By the end of this year there’s going to be millions of people unemployed and you know who’s going to pay for it? All the young ones. Not me because i’m going to be dead.”