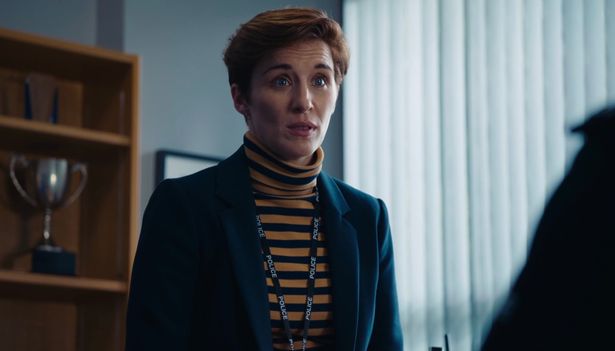 Lind of Duty viewers fear that DI Kate Fleming could leave this series in a body bag after some seriously eerie foreshadowing.

Kate, played by Vicky McClure, managed to save Terry Boyle after Ryan Pilkington attempted to kill him as he appeared about to reveal all about the OCG.

She later went straight to AC-12 over her suspicions about her own team – including boss DCI Joanne Davidson.

But as Kate grilled Ryan, after realising who he was, about what happened in the police car, DCI Davidson was seen staring intensely.

And viewers feared that Kate could he on DCI Davidson’s hit list.

Fans took to Twitter to comment, with one writing: “If Kate dies I will go on a one man riot #LineOfDuty.”

Despite receiving a non-verbal warning from Ted Hastings, Steve continued to struggle and fans were left heartbroken.

One fan tweeted: “Steve, PLEASE GO TO DETOX. It’s so hard and dangerous to do it alone. #LineOfDuty.”

While another remarked: “No Steve no! #LineOfDuty.”

A third wrote: “Noo. Not with the booze. #LineOfDuty.”

*Line of Duty airs Sundays at 9pm on BBC One