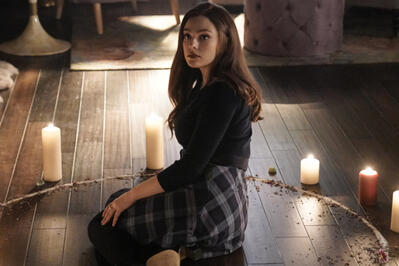 Legacies Season 2 ended on an accidental cliffhanger, but we’ll be returning to Mystic Falls sooner than you think. Season 3 is just around the corner, and based on what we know so far, it might be the best season yet! There are still plenty of unknown elements when it comes to Legacies Season 3, but TV Guide has managed to find a few clues about what’s in store for the new season. Check out all the casting information, spoilers, and premiere date expectations we know so far to keep yourself up to date about the new season.

It will premiere in January 2021. Legacies will be returning on Thursday, Jan. 21 at 9/8c for Season 3, following the world premiere of Jared Padalecki’s new series, Walker.

Production is back on. Production on Legacies Season 3 resumed in mid-October, which tracks with The CW’s expected premiere date in 2021. The show’s social media accounts posted photos of actors back on the set, wearing masks and staying socially distanced between takes.

There are several storylines still up in the air. Hope (Danielle Rose Russell) and Landon’s (Aria Shahghasemi) fates were left in limbo when Season 2 wrapped up after Episode 16. Hope was locked in a sleeping spell after being turned into stone in Josie’s (Kaylee Bryant) mindscape, while Landon got stabbed with the golden arrow and, as expected, didn’t resurrect — meaning he might be dead for real. There was also the small matter of the Necromancer (Ben Geurens) stealing all that dark magic from Josie. Wherever he is, he’s about as powered up as he’s ever been, which can’t be a good thing for the super squad.

The musical episode is still happening. We were all jazzed for the Season 2 musical episode, which was supposed to be a tribute to The Vampire Diaries and The Originals, according to executive producer Brett Matthews. Unfortunately, that musical was supposed to take place in the 19th episode of Season 2, and production got shut down before the episode could be filmed. Luckily, showrunner Julie Plec seems committed to getting this episode filmed since she tweeted, “If we don’t eventually complete and air the musical episode I will (metaphorically, not literally) die. So I think we’ll be fine.”

When production on Season 3 started back up, Plec tweeted another tease for the musical episode, writing, “Congrats to @cwlegacies and @CWRoswellNM for beginning to shoot their 3rd Seasons. I can’t believe we’re finally able to continue our stories — and I CAN’T WAIT FOR YOU ALL TO SEE THE SALVATORE: THE MUSICAL EPISODE.”

Congrats to @cwlegacies and @CWRoswellNM for beginning to shoot their 3rd Seasons. I can’t believe we’re finally able to continue our stories — and I CAN’T WAIT FOR YOU ALL TO SEE THE SALVATORE: THE MUSICAL EPISODE.

Klaus Mikaelson (Joseph Morgan) won’t be showing up. Though we’ve held out hope (pun totally intended) that we’d one day see Hope’s dearly departed dad show up on Legacies — be it via the therapy crystal, a flashback, or even as an actual ghost — it seems like we should cross that one off our wishlist for good. Joseph Morgan recently told TV Guide that we’ll never see Klaus on his daughter’s spin-off series because it would feel forced, and in his mind, that story has ended. We’ll just have to hold out for Caroline (Candice King) instead!

We’ll be seeing more of Jed (Ben Levin) and Ethan (Leo Howard). Though we didn’t see a whole lot of them in Season 2, Jed, a werewolf at the Salvatore School, and Ethan a human who goes to Mystic Falls High School, will be around a lot more in Season 3. Deadline reports that both Leo Howard and Ben Levin have been upped to series regulars in the upcoming season.

Legacies Seasons 1 and 2 are available to stream on Netflix.