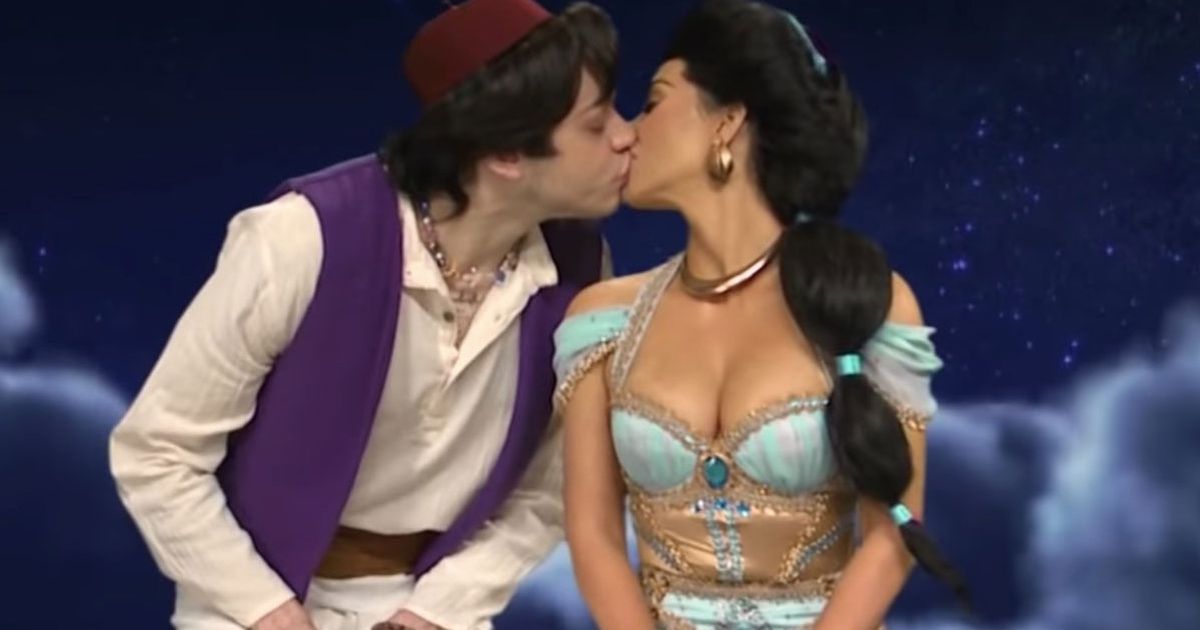 Kim Kardashian and Pete Davidson shared a kiss on Saturday Night Live in an Aladdin-inspired sketch.

In the send-up of the Disney movie, Pete takes the role of Aladdin, who on a magic carpet ride with Princess Jasmine (Kim) admits his fears about having sex with her.

While in real-life Pete became synonymous with ‘big d**k energy’ thanks to his former relationship with Ariana Grande, in the sketch Aladdin fears he’s not adequate enough in the trouser department for his royal love.

And she doesn’t help matters either as she starts referring to him as a “street rat” and brags about her celebrity pals while “he’s only friends with a monkey”.

“Jasmine, as we start getting more intimate, I’m just a little concerned that physically I can’t handle you,” he tells her.

Despite her attempts to comfort him, he continues: “You’re a lot of woman and I’m so frail because all I eat is stolen bread.”

The insecure Aladdin makes matters worse for himself as he quizzes Jasmine on her exes – only to discover that they are mainly “athletes, rappers and the King of Uganda”.

When they run into Jasmine’s sister, Jourtney (Cecily Strong), it only goes from bad to worse, with Jourtney’s boyfriend referring to everything as “little” in regards to Aladdin.

Taking matters into his own hands, Aladdin eventually asks his Genie to grow his penis size in order to help him in bed – much to the Genie’s annoyance seeing as he initially planned to set him free.

“That is better… even though it’s the wrong colour,” Jasmine remarks.

With that, the couple got a roar from the audience as they shared a kiss together.

Kim Kardashian proved to be a roaring success as the guest host of the long-running satirical sketch show as it returned on Saturday night.

Elsewhere in the episode she took aim at her sisters, as well as her own sex tape, her father’s connection to the OJ Simpson trial, and her relationship with Kanye West.

During another sketch, Kim turned into her sister Kourtney as she’s given a court show, only for it to derail because she couldn’t stop snogging boyfriend Travis Barker.

She later played up a mocking ad for her own shapewear range, Skims, launching a version for ‘thick dogs’.

To prepare for her star turn as the centre of SNL, Kim worked a reported 20 hours a day in order to get her comedy lines right.

Sure to say she nailed it!

Saturday Night Live airs weekly on NBC in the US.