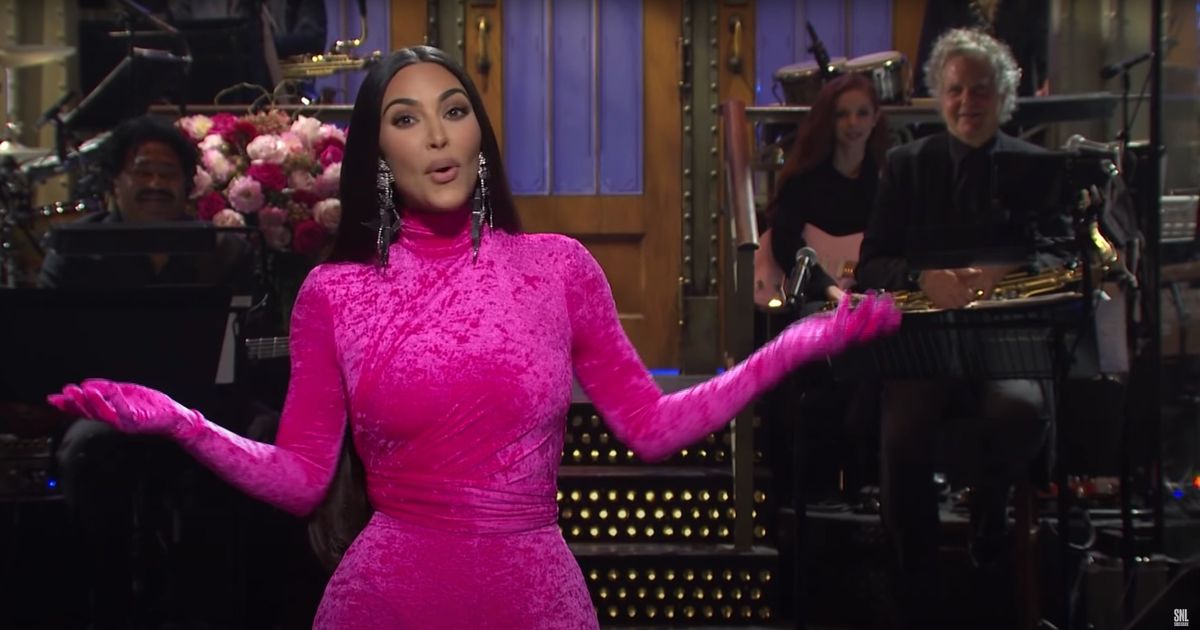 Kim Kardashian made her hosting debut on US show Saturday Night Live last night and didn’t hold back on the self-deprecating humour, with absolutely nothing about her life off limits

Nothing was off limits for Kim Kardashian as she made her debut on Saturday Night Live.

Kim hosted the US comedy show, starring in sketches and delivering an incredibly self-deprecating opening monologue that poked plenty of fun at her famous family.

Joking about surgery, her infamous sex tape, her divorce from Kanye West and her siblings, Kim laid into everyone she knows in a hilarious four-minute speech.

Taking to the stage in a figure-hugging pink catsuit with built in boots and gloves, she didn’t hold back.

Kim didn’t hold back in her monologue
(

For anyone who missed it, here’s Kim’s monologue in full and all the people she savaged…

“Thank you, thank you guys so much. I’m Kim Kardashian-West and it’s so great to be here tonight. I know, I’m surprised to see me here too.

“When they asked, I was like, ‘You want me to host? Why? I haven’t had a movie premiere in a really long time’.

“I mean actually, I only had that one movie come out and no one told me it was even premiering – it must have slipped my mom’s mind.”

“I’m excited to be here tonight to show you guys I’m so much more than a pretty face, and good hair, and great make up, and amazing boobs, and a perfect butt.

No one was off limits
(

“Basically, I’m so much more than that reference photo my sisters show their plastic surgeons.”

“But the one thing I’m really proud of is that no one could call me a gold digger. Honestly, I’m not even sure how you become one.

“So I asked my mom’s boyfriend, Corey.”

“I’ve been very lucky in life and I know I’m privileged, which is why I try to give back as much as I can.

“A real passion of mine is getting wrongly accused people out of jail, and I think I’m following in my father’s footsteps.

Kim had the crowd in stitches
(

“My father was and still is such an influence and inspiration to me and I credit him for really opening up my eyes to racial injustice.

“It’s because of him I met my first black person. Want to take a stab in the dark as to who it was?

“I know it’s sort of weird to remember the first black person you met, but OJ does leave a mark, or several, or none at all – I still don’t know.”

“Listen, I’m an influencer, so I understand that the things I say carry weight, but you know I would never tell anyone what they can and can’t do – remember I’m a Kim, not a Karen.

“And honestly with all of the K names it’s really impressive my mom didn’t pick Karen. I mean, somehow she just knew. I don’t know how she saw that one coming and not Caitlyn.”

“Now I know we’re divided as a country but I’d love America to come together which is why I’m here to announce that I’m running for…I’m just kidding, you guys.

“I’m not running for president. We can’t have three failed politicians in one family.

She made jokes about Kanye

“I’ve been very blessed in this life and I’m grateful for everything, honestly all the ups, all the downs, I mean I married the best rapper of all time.

“Not only that, he’s the richest black man in America, a talented legit genius who gave me four incredible kids.

“So, when I divorced him, you have to know it came down to one thing – his personality.

“I know that sounds mean but people keep telling me that comedy comes from truth and if there’s one thing that I always strive to be, it’s genuine.”

“So I just want to say how incredibly excited I am to be up here on this stage tonight.

“I’m so used to having 360 million followers watching my every move, I mean how many people watch SNL? 10 million?

“Tonight is just a chill, intimate night for me.”

OJ Simpson has repeatedly denied he was responsible for the murders of his ex-wife Nicole Brown and her friend Ron Goldman.

He was acquitted at the murder trial in 1995, where Kim’s father Robert Kardashian was one of his lawyers.