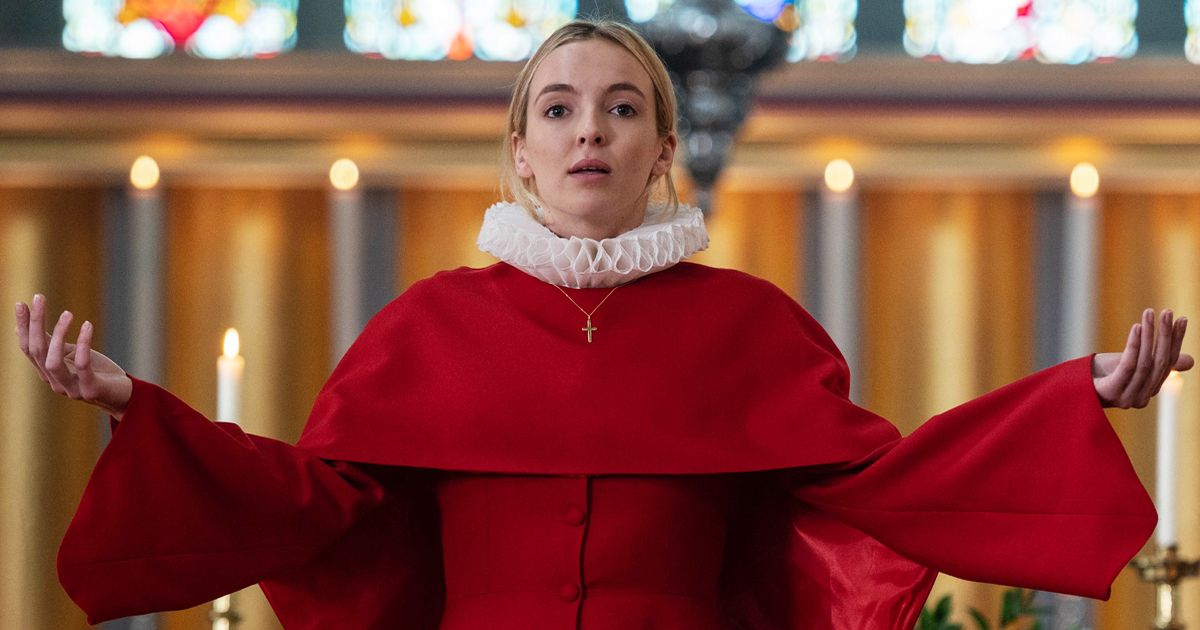 The highly anticipated return of hit thriller series, Killing Eve, is set to make a return in February. Fans have been treated to the trailer and images from its fourth and final series

Images and a trailer for the final series of Killing Eve have been released and show Jodie Comer’s assassin character, Villanelle, attempting to “shed her label as a monster”.

In pictures for the thriller, Villanelle is seen dressed in an all-red cassock worn by the clergy of the Catholic Church.

There’s also Fiona Shaw back as Carolyn Martens sitting by a swimming pool, while Camille Cottin is pictured in her role as high-ranking Twelve agent, Hélène.

Jodie Comer’s murderous character Villanelle, is seen dressed in an all-red cassock worn by the clergy of the Catholic Church, in one of her many disguises in series four

In other pictures, Villanelle is dressed in an angel-style outfit while Eve dons a trench coat, sunglasses and a blonde wig.

Along with a new teaser video, the Killing Eve Instagram account added the caption, “You deserve this. 2/27/22,” officially confirming the date for Series 4 kicking off on 27th February 2022, in the US format.

The UK airing of the show on BBC will be following shortly after.

Sandra Oh, who plays Eve Polastri, dons a blonde wig and trench coat to disguise herself for the first time in the thriller series

The black-comedy/thriller’s executive producer Sally Woodward Gentle also teased: “Eve and Villanelle, having left each other in total turmoil on Tower Bridge at the end of season 3, are thrown into season 4 trying to figure out what they mean to each other and what their lives now stand for.

“And while Carolyn has shot a man in cold blood, she is trying to find out who is responsible for the hit on her son. This one is going to be a lot more personal and passionate than the seasons before.”

And there will be a host of new character as well as many brought over from series 3, with the mysterious new Felix (played by Stefan Iancu).

During series 2, we were introduced to Julian (played by The Mighty Boosh’s Julian Barratt), Jess (W1A’s Nina Sosanya) and Hugo (Edward Bluemel).

Last month, Jodie, 28, who previously confirmed that filming for season four was set to start on 7 June of this year, reflected on Killing Eve coming to an end.

She told Harpers Bazaar: “I’m trying not to think about it too much, honestly.

“It’s sad, you know? I’ve been with this character for a really, really long time. [But] I would rather we ended on a good note and kept our integrity, instead of going on and on, and being kicked out the door.

“I’ve been with this character for a really, really long time.”

French actress Camille Cottin returns in her role as Helene, one of the highest-ranking members of The Twelve

Still, she added that she’s on board with the decision to end the series after four seasons, explaining, “I would rather we ended on a good note and kept our integrity, instead of going on and on, and being kicked out the door.”

The first series of Killing Eve was based on the book Codename Villanelle by Luke Jennings, but the series beyond this have taken their own direction.

While the plotline of series four has not been shared, undoubtedly, psychopath Villanelle will continue to kill, and be feverishly pursued by Sandra Oh, who she will remain obsessed with.