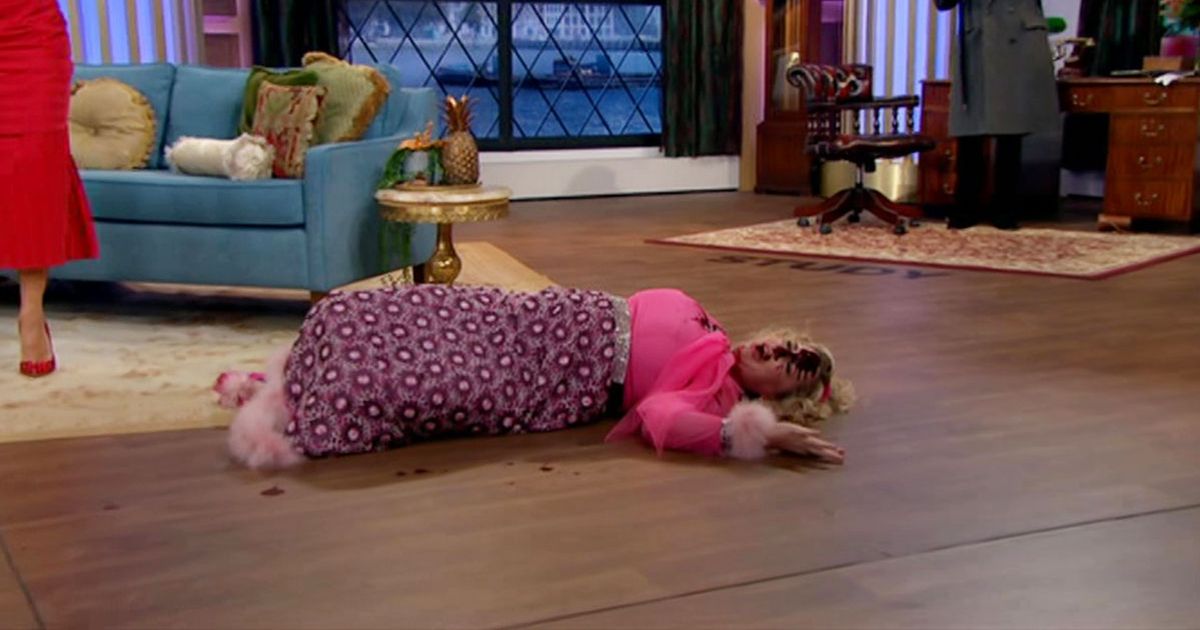 This Morning viewers were welcomed to the manor by Lady Josie, attended by Holly and Phil as they swirled their Martini glasses – but she was promptly killed by an NTA

This Morning’s Halloween special opened to a murder – sadly that of Josie Gibson, who dramatically fell to the floor in a pool of blood next to an NTA.

Viewers were welcomed to the This Morning manor by Lady Josie, attended by Holly and Phil as they swirled their Martini glasses.

Clad in her mum’s strapless red dress, diamond necklace and a faux fur scarf slung over one shoulder, it was clear that Holly, 40, was Miss Scarlett.

While Phillip Schofield took on a gruff voice as he starred as Colononel Mustard, “whose bark was as bad as bad as his bite” and Giles Brandreth starred as the butler Fenton.

Josie Gibson was murdered during This Morning’s Halloween special

When the lights cut out in the studio before flickering back on, Josie was found collapsed on the floor.

As Holly and Phil speculated who could have killed her, viewers were quick to work it out.

One pointed out: “The crew member that run on when it was dark did it.”

While another commented: “I think it was the floor manager that was running around in the dark.”

Last year, viewers missed out on the usual mad Halloween fun due to coronavirus, but back in 2019 viewers were convinced that they were “hallucinating” after Holly’s taxi was picked up by a tornado and she was sent crashing down into the studio.

Holly fell on top of the Wicked Witch of the East – killing her in the process – before stepping out in her ruby red slippers.

In 2018, the studio was transformed into a carnival, with Rochelle stepping in for Holly as she presented alongside Phil as characters from The Greatest Showman.

2017 proved to be equally incredible, with Phil terrifying everyone as he appeared as The Night King from Game Of Thrones.