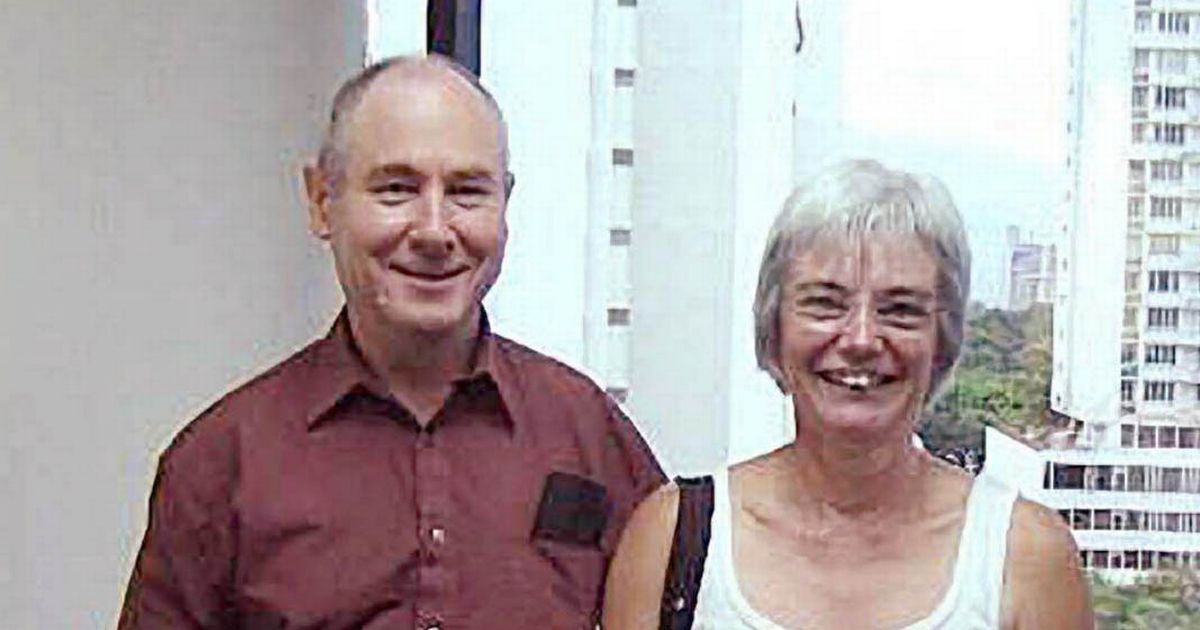 Anne Darwin, who was married to canoe man John Darwin, had no idea she had a grandson until he was brought by her son Mark to visit her in prison – but now they go on holiday together

As well as rebuilding their relationship with their kids while in prison, John and Anne Darwin had grandchildren to meet.

The former couple lied to their own sons with their scheme to fake John’s death in a canoe accident in 2002, while Anne played the grieving widow and collected his £250,000 life insurance policy.

Anthony and Mark, who played no part in the audacious con, comforted their seemingly devastated mum while their supposedly ‘dead’ father was actually sat next door just metres away.

They discovered the shocking truth about Anne and John’s lies at the same time as the rest of the world and immediately disowned their parents, claiming they never wanted to see them again.

“It was a cruel act of betrayal that no parent should ever inflict on their children – the pain and suffering it caused me and my brother is indescribable. The horror of the discovery, my sheer fury and what they put me though, is something that will taint my life forever,” said Mark in 2018.

However, there has since been the most unlikely of reconciliations and Anne has transformed into a doting grandmother.

John and Anne Darwin with their sons Mark and Anthony
(

John was sentenced to six years and three months in prison for admitting deception by faking his own death, while Anne received six-and-a-half years behind bars for fraud.

“After the truth came out that we’d been living in Panama together, I continually wrote to Mark and Anthony to say, ‘I am so sorry. I really do love you’,” explained Anne to The Guardian.

“But they refused to see or talk to me. The first time I set eyes on them [afterwards] was at my trial when Mark was the first to testify against me. After he left the witness box, he only lifted his eyes fleetingly to meet mine. I was totally shocked by how dark and full of anger they were. To see that was absolutely horrendous.”

Mark did decide to visit his mother in Low Newton Prison just after her trial, but their first encounter was short, stiff and formal.

But they started to build bridges during subsequent visits and brother Anthony finally decided to face his mother for the first time since her crimes were exposed.

Anne got a massive surprise when Anthony and his wife Louise turned up at Askham open prison, near York, where she had been transferred to in 2010.

For the very first time, Anne was introduced to the grandson who she didn’t even know existed.

“Anne walked nervously down Askham Grange’s gravel drive, barely daring to believe Anthony would be there waiting. But he was,” explained journalist David Leigh

“So too was his wife Louise. They had driven 200 miles north from their home to introduce Anne to the grandson of whose existence she had no idea.”

Anne was released from prison in March 2011 after serving half of her sentence, while John, who she was now divorced from, left two months before.

Since then, Mark has revealed that he has forgiven his mother to a certain extent but admitted he would not trust either of his parents on financial matters.

Mark, who lives in Hertfordshire with wife Flick and their two sons, said he could never do to his kids what his mother did to him.

Their was a milestone moment in 2016 when Mark invited Anne to join the family on a holiday in Spain and they posed for a loving photograph together.

“Never, then, would I have ever dreamed I would be happily posing with my mother,” he told The Mail at the time. “What I have gone through to get to a stage where I can forgive has been tough. It’s taken deep thought and a difficult process of accepting her faults.”

John’s sons have not forgiven him
(

Mark explained that every bit of information he learned was only through the media or at the trial – and it was only on the first day of the court case that he realised Anne was in on the scheme from the start.

He said: “I have forgiven her, to some degree, but I will never understand. Nor forget. I’ve even got over, to some extent, the gnawing need to know why. Why do it to us? Nothing can describe the kick in the teeth I felt when I discovered she had been in on the entire thing

The Darwins’ son has been in contact with his father and when asked if he could ever forgive him, he simply replied: “Perhaps”.

Continuing, he added: “But at least I have my family,’ again he pauses, ‘not intact, never again intact. But they are present. They are alive. Do I feel the same about them? No. No, I don’t. But the love is there. It’s just… different. I love my mother. Just not in that childhood, all-encompassing way. Do I trust them? Yes, I do, but only in so far as it wouldn’t adversely affect me.”

His brother, Anthony, has been less forgiving and refuses to speak to John at all, but he does have a relationship with Anne which is more distanced than mark.

One of the sons actually managed to sneak onto the set of The Thief, his Wife and the Canoe for the day in a disguise.

Eddie Marsan, who is playing John in the four-part drama, said: “We had no idea until a few weeks later. He had come in with a baseball cap and a Covid mask on to watch. We didn’t get any feedback.”

*The Thief, His Wife and the C anoe is on ITV at 9pm from Easter Sunday to Wednesday 20th April