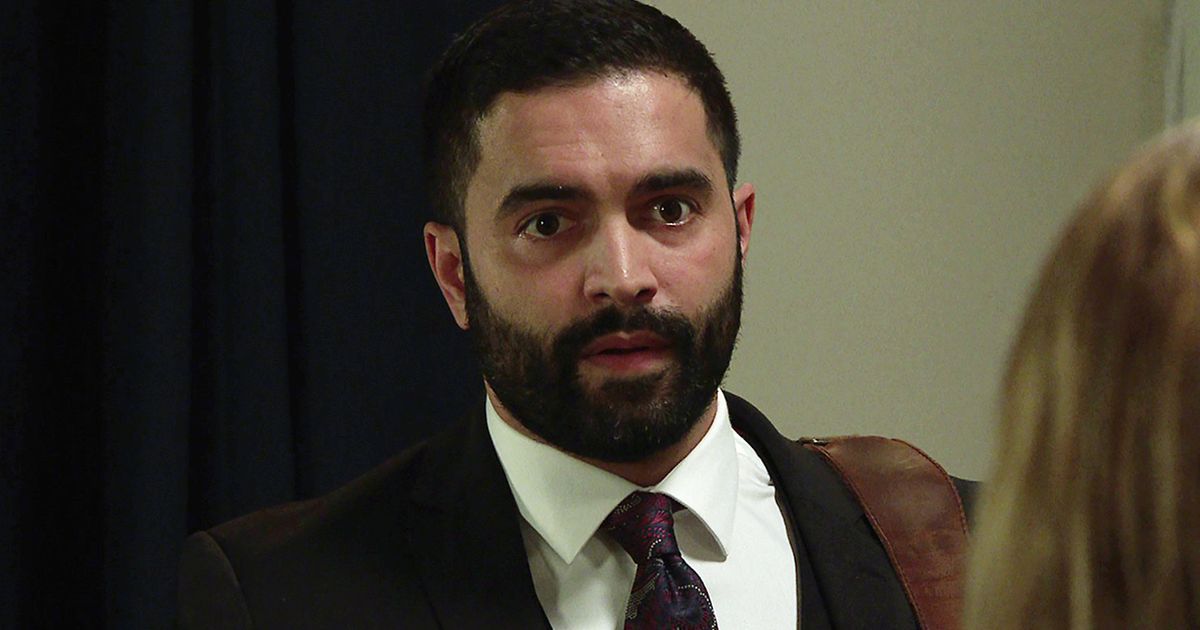 Coronation Street fans were ready for Imran Habeeb to leave the ITV soap as soon as possible, not liking the villain he had become

Coronation Street fans were fuming with solicitor Imran Habeeb during Wednesday’s episode of the ITV soap, as he continued his plan against ex fling Abi Franklin.

The pair slept together in September last year and Abi fell pregnant, while she didn’t know about the pregnancy until she gave birth last month.

Since then, Abi has been fighting to keep custody of her baby son Alfie, due to her past drug addiction and the fact she lost custody of her other children.

Imran initially vowed to help her, but he has since turned against her after believing she was back on drugs – leading to him seeking custody for himself.

With the custody hearing looming and them now against each other, Imran has hired a private investigator to find dirt on Abi, and prove she is back on drugs.

But the investigator resorted to dirty tactics on Wednesday which weren’t even legal, as Imran paid him to follow Abi.

Ben revealed he’d been stalking Abi’s social media, while saying vile things about her as he spoke – but it’s what he did next that left viewers disgusted, and slamming Imran for hiring him.

The investigator revealed he’d skimmed her credit card and accessed her banking, causing Imran to look up in shock.

He said: “Woah, hang on, this is not legal,” to which Ben replied: “You wanted dirt. When you dig things get messy.”

Imran then urged Ben to keep digging despite knowing what he was up to, with Ben even suggesting he could set Abi up.

Imran refused to agree to this before telling him to keep following her and finding dirt.

Imran initially vowed to help her, but he has since turned against her

Knowing Imran was leaving soon, viewers slammed the character and begged him to go as soon as possible because of his treatment of Abi.

One viewer tweeted: “Imran really has become a huge slug, as another said: “Imran is a real nasty piece of s**t.”

A third fan tweeted: “Can Imran just leave now please, as a fourth agreed: “Literally CANNOT wait until Imran finally leaves! I’m so done with him.”

It looks set to get worse though, as revealed by This Morning ’s soap expert Sharon Marshall who was on Tuesday’s programme to dish the latest gossip with hosts Phillip Schofield and Holly Willoughby.

Sharon said this week on the soap will see a showdown of “Abi versus Imran”, with Abi saying she intends on fighting Imran “every step of the way for custody”.

Meanwhile, Toyah has been at boyfriend Imran’s side as they discussed raising Alfie with the social worker – only for Toyah to drop the bombshell that the pair were getting married, unbeknownst to Imran.

Sharon said that Toyah is “preparing to marry” Imran, but then teased: “Will she when she realises how far this has gone? How far are they going to go?”

Knowing Imran was leaving soon, viewers slammed the character and begged him to go as soon as possible
(

This comes after ITV viewers took to Twitter to theorise whether Toyah was “playing” Imran and the storyline could be paving the way for actor Charlie de Melo’s planned exit from the cobbles.

One wrote: “Toyah is definitely playing Imran, like hell would she marry him when he cheated.”

Another wrote: “I hope Toyah has revenge up her sleeve because he damn well deserves it.”

A third tweeted: “Toyah really is desperate for a kid. It’s obvious that she doesn’t trust Imran & I think his chances would be better of getting Alfie if they weren’t together.”