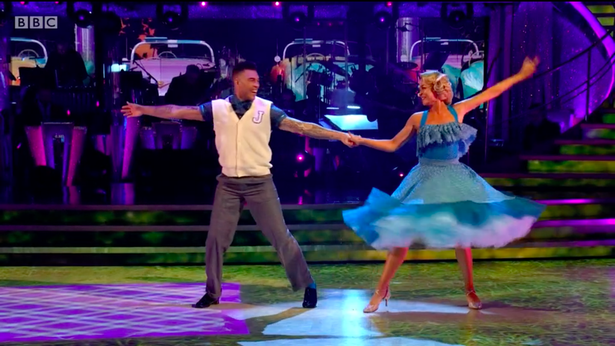 The couple were awarded 18 points for their American Smooth, with Shirley saying Jason gave “100 per cent” and praising his footwork.

Before he took to the dance floor, Jason said: “Strictly is the epitome of British television and this year, more than ever, I’m so proud and humbled to be participating. Strictly was the first show I ever watched when I moved to the UK and I’m a massive fan.

“My six-year-old daughter never got the chance to see me run out on the field at an NFL game but she is very excited about me taking to the dance floor. I hope I can do her proud.”

Jason had stayed in the US to concentrate on his budding career as a pundit and broadcaster.

A source close to the former couple told The Sun: “Although Nadine and Jason were never married, they lived as a close family unit and remain good friends as they co-parent their young daughter.

“They still care for one another, but are no longer in a romantic relationship.”

Nadine herself admitted earlier this year that the reason for their split is because after 11 years together their relationship had changed.

She said: “I think it came naturally, to be honest. It can come to a situation where you’re almost (just) really, really good friends, so that can change the dynamic of a relationship.

“Jason and I are very, very close in that way. We’re more friends than in a romantic sense. He was in our house for Christmas. We still take Anaiya out, we have dinners. She’s always the main priority.”