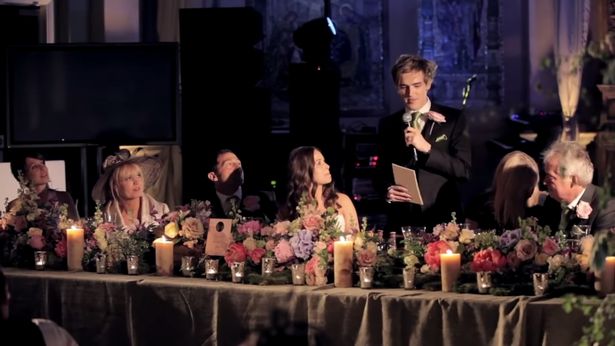 Giovanna Fletcher met her husband, Tom, when she was just 13 when she sat next to him in school assembly.

But they didn’t make it official until several years later in 2003, when they were 18.

The following year he wrote her a song for Valentine’s Day, All About You, which would go on to become a massive hit for his band McFly.

Tom has always been a romantic, but his sweetest moment remains his wedding speech, or should we say, wedding song, which he performed after they tied the knot in 2012.

Eight years later, the clip has been viewed 21million times on YouTube and is still bringing fans to tears.

In the 14 minute song, Tom thanks his family, his new in-laws, his McFly bandmates and of course, his beautiful wife.

To the tune of his hits Obviously, All About You

He begins: “Recently I’ve been, having a wedding, I married this girl, whose outta this world believe me.

“And we are so grateful, to so many people, but I’m saying thank you, to only a few, I’m sorry.

Speaking about the moment Gi realised she wouldn’t get a message from her children, fellow campmate Vernon said: “As the process went on and the boxes became fewer and the treats from home became less she realised that there was an opportunity to not be given a message from loved ones and that’s when it really hit home.”