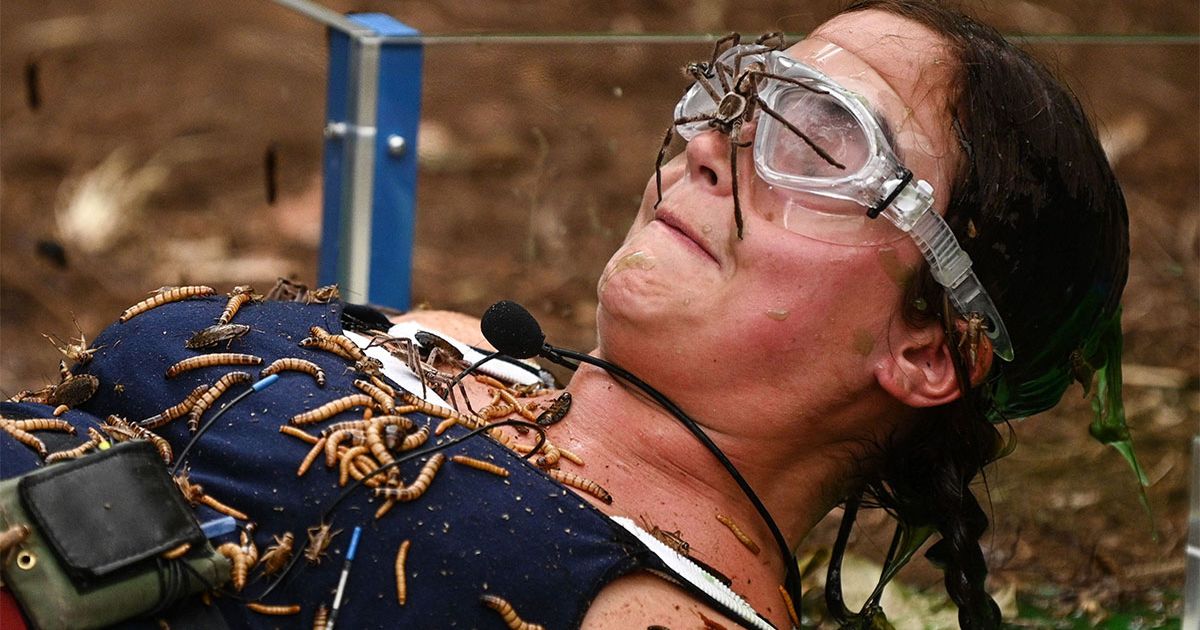 I’m A Celebrity… Get Me Out Of Here! 2021 returns to our TV screens on Sunday 21 November.

Ant McPartlin and Declan Donnelly will be hosting the ITV show from Wales again this year, as a trip Down Under has been deemed ‘too tricky’.

And while the official line-up has yet to be confirmed, there have already been rumours about which celebrities are heading to the Welsh castle.

EastEnders stars Adam Woodyatt, who plays Ian Beale, ex-Radio 1 DJ Nick Grimshaw and comedian Jack Whitehall have also had their names thrown in the ring. While morning TV host Richard Madeley has reportedly signed a £200,000 deal to join the show.

But before a brand new series gets underway, Ivory Research have compiled the most iconic bushtucker trials from the show’s 20 year history.

From eating animal privates and live spiders to braving creepy crawlies, these are some of the best I’m A Celebrity moments so far.

Alex Best, known for being the ex-wife of footballer George Best, took on the ‘Tunnel of Trouble’ bushtucker trial back in 2004.

The challenge saw the model crawl through five tanks containing all manner of creepy crawlies, all while trying to pick up 10 stars with her mouth to win meals for the camp.

Alex finished the series in sixth place, with Kerry Katona being crowned the first Queen of the Jungle back in 2004.

Reality TV Stars Ferne McCann, Spencer Matthews and Vicky Pattinson played a terrifying real-life version of ‘snakes and ladders’ for their first trial of the series.

This bushtucker trial saw everything from snakes to cockroaches and eels tipped on the heads of the contestants through glass boxes on their heads.

Vicky went on to be crowned Queen of the Jungle, with Ferne finishing in third place and Spencer withdrawing, leaving him in 13th place.

Ferne McCann was challenged to eat a live spider
(

Former The Only Way Is Essex star Ferne again makes it on to this list for one of the most gruelling I’m A Celebrity eating challenges the show has ever seen.

Apparently it smelled of a cockroach, had a mushy body and spiky and crunchy legs. Well done Ferne!

Model Catalina Guirado swims in a crocodile pit in series 2
(

Model and actress Catalina Guirado got into a pond full of crocodiles wearing just a bikini for this terrifying bushtucker trial in series 2.

Six stars in one of the crocs started to move, prompting a crew member who was armed with a gun to stand by.

As snakes start to seep into the pond too, Catalina somehow manages to get all 10 stars with 30 seconds to spare. She finished in seventh place, with Phil Tufnell taking the crown that year.

Model and TV personality Kendra had to poke her head through boxes of different critters to collect the stars in The Grim Gallery bushtucker trial.

The former girlfriend of Playboy founder Hugh Hefner only managed to get one star for the camp despite her best efforts.

Kendra finished the series in sixth place, with champion motorcycle racer Carl Fogarty being crowned King of the Jungle in series 14.

The challenge – which she admitted was her “toughest yet” – saw her navigate her way through snakes, crabs and eels to unlock boxes and win six meals for camp.

Kendra and Melanie in the ‘Critter Conveyor’ challenge
(

The pair both faced their biggest fears – Kendra’s being cockroaches and Mel’s being Snakes – to win six stars for camp.

Lady C with snakes in the ‘Helmets of Hell’ trial
(

The author and socialite braved snakes and had her head submerged in water as eels swam around her for the Helmets of Hell bushtucker trial.

She was forced to stop the challenge but still took nine stars back to the camp. However, Lady C left the jungle four days before the series 15 final “on medical grounds”.

Having put herself forward for her first trial, former Pussycat Doll Ashley Roberts rode to victory in the Terror Train challenge.

The singer sorted through fish guts, rats and spiders to win stars for her I’m A Celeb campmates.

Ashley did well in the jungle finishing in second place, just missing out on the top spot to EastEnders actress Charlie Brooks, who plays evil Janine Butcher.

Who can forget reality TV star Joey Essex appearance on series 13 of I’m A Celebrity… Get Me Out Of Here?

The Submerged bushtucker trial saw him swimming around a submarine filling with water to look for stars, but of course he was not alone.

The Essex lad later finished in fourth place, losing out to Kian Egan who claimed the crown.

Jacqueline Jossa holds a spider in her mouth in 2019
(

EastEnders actress Jacqueline Jossa won series 19 of the series, but before going home with the crown she was definitely put through her paces.

Her most memorable bushtucker trial was Stake Out which saw her covered in ants, cockroaches and spiders – one of which ended up in her mouth.

She later revealed one of the spiders – which are her worst fear – actually urinated in her mouth.

Former TOWIE star Joey Essex and TV presenter Matthew Wright were human egg timers in this terrifying Up To Your Neck In It bushtucker trial.

Both were submerged up to the neck in sand and then had an array of critters such as crickets and meal worms dumped on their heads.

Matthew didn’t last long in the competition, finishing in ninth place. He also had to have a cockroach removed from his ear.

The Every Critter Counts challenge saw the whole cast take on a live trial where they were blindfolded and made to guess what was in the box below using only their feet.

It became memorable as Lady C had her toes pinched by a crab in the first few seconds, leaving her shaken.

Lady C seems to have been the most popular when it comes to trials – and she excelled herself in the Disaster Chef challenge alongside campmate Jorgie Porter.

Jorgie almost made it to the final, finishing in fifth place, losing out to Vicky Pattison.

He endured maggots down his back and was even bitten by a Bandicoot as he put his hand in a hole to retreive a star.

David went on to finish in third place, with actress Charlie Brooks stealing the crown in series 12.

The pair had crickets, spiders and even a python dumped on their heads in the excruciating bushtucker trial.

Although Katie didn’t win the 2004 show, she did meet Peter Andre, who she went on to marry and have two children with. Although they have since divorced.

17. Emily Atack and Malique Thompson-Dwyer – The Sting Off, series 18

Emily Atack and Malique Thompson-Dwyer in The Sting Off
(

Actress Emily and actor Malique were the first to take to the stage in The Sting Off in series 18 of I’m A Celebrity.

The pair had to literally sing for their suppers as they were pelted with creepy crawlies – and their campmates had to guess what the songs were.

The pair braved eels, crabs, spiders and frogs to take the full 12 stars back to camp.

But while Adam came third in the competition, Danny was the first celebrity to be eliminated from the show.

Adam Thomas takes on the Fill Your Face trial
(

Another bushtucker trial for loveable Adam Thomas saw the Emmerdale star take part in the Fill Your Face challenge.

He bravely held a live, giant spider in his mouth for 10 seconds and downed fish eyes which were heard popping in his mouth.

Although disgusting, Adam still completed every part of the challenge, winning 12 stars for camp.

Corrie star Helen Flanagan in the Come Dive With Me challenge
(

The actress panicked before her Come Dive With Me challenge even started and went on to win four stars – although she later had them taken away for using her hands to get them rather than her mouth.

She went on to finish seventh in series 12, which was won by soap star Charlie Brooks.

*I’m A Celebrity…Get Me Out Of Here starts on ITV on Sunday at 9pm.