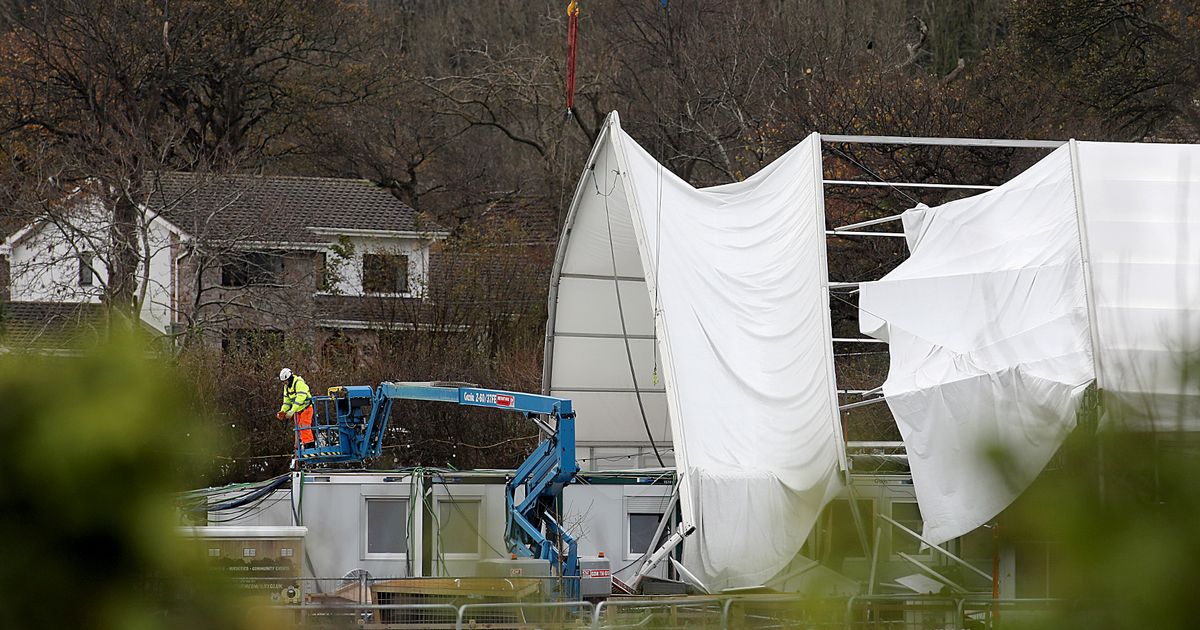 The ITV show has been off the air since Friday after the set was ravaged and partially destroyed by brutal winter Storm Arwen. Crew are working desperately to finish repairs before the show returns to screens on Tuesday night.

I’m A Celeb: ITV crew rush to repair set after damage from Storm

Work is frantically underway to repair the I’m A Celebrity set amid hopes the show will finally return to screens tomorrow night after being forced off the air by Storm Arwen.

The hit ITV series was cancelled over the weekend and cast were moved to a secure location after high winds and brutal weather conditions battered the set at Gwrych Castle in North Wales.

The production village was torn to shreds by high winds as the winter storm battered the UK – which claimed lives and caused power outages across the UK.

Photos from the show’s filming location have shown workmen dressed in high vis clocking up hours of work as they repair the set.

Men working with cherry pickers were fixing the roof of the production village as show bosses aim to see the series return on Tuesday night for the first proper live show since Friday.

The castle grounds were battered by 80mph winds over the weekend – with destruction being caused by a falling tree which damaged the main production tent.

The medical unit was also affected after fallen branches blocked a path on site – located near to Kiosk Cledwyn’s Ye Olde Shoppe.

The production village was destroyed by Storm Arwen
(

Meanwhile, the historic castle where the show is filming for the second year in a row – after the Covid pandemic made filming in Australia impossible – escaped damage.

A statement from the building’s official trust confirmed that the castle had “suffered no significant damage.”

With no new episodes of I’m A Celeb available to watch, fans of the series have been left less than impressed by the replacement offered by ITV.

A repeat of Jamie and Freddie’s DNA Journey was instead aired – featuring Jamie Redknapp and Freddie Flintoff.

Announcing the new schedule on Twitter, Ant and Dec wrote: “Since we can’t be on your tellies tonight, we’ll let these two keep you company instead! @ITV tonight at 9pm a repeat of Jamie and Freddie’s DNA Journey #DNAJourney #affiliate.”

Unimpressed, one annoyed tweeted: “Still don’t know why we’re not getting an unseen footage show. It would be the perfect replacement.”

While another commented: “If it had any sense they’d be showing yours.”

Announcing that weekend episodes would be cancelled on Saturday, ITV announced at the time: “Owing to technical difficulties caused by extreme weather conditions in the area, there will be no new episodes of I’m a Celebrity … Get Me Out Of Here! this weekend (Saturday and Sunday).

“I’m A Celebrity…Get Me Out Of Here! will be replaced tonight and tomorrow night in the ITV schedules by compilation shows (voiced by Ant & Dec) featuring best moments from previous series.”

The show has suffered other catastrophes since beginning airing just over a week ago – as star signing Richard Madeley was forced to retire from the series due to a health scare.

I’m A Celebrity…. Get Me Out Of Here! hopes to return to ITV1 at 9pm on Tuesday night.