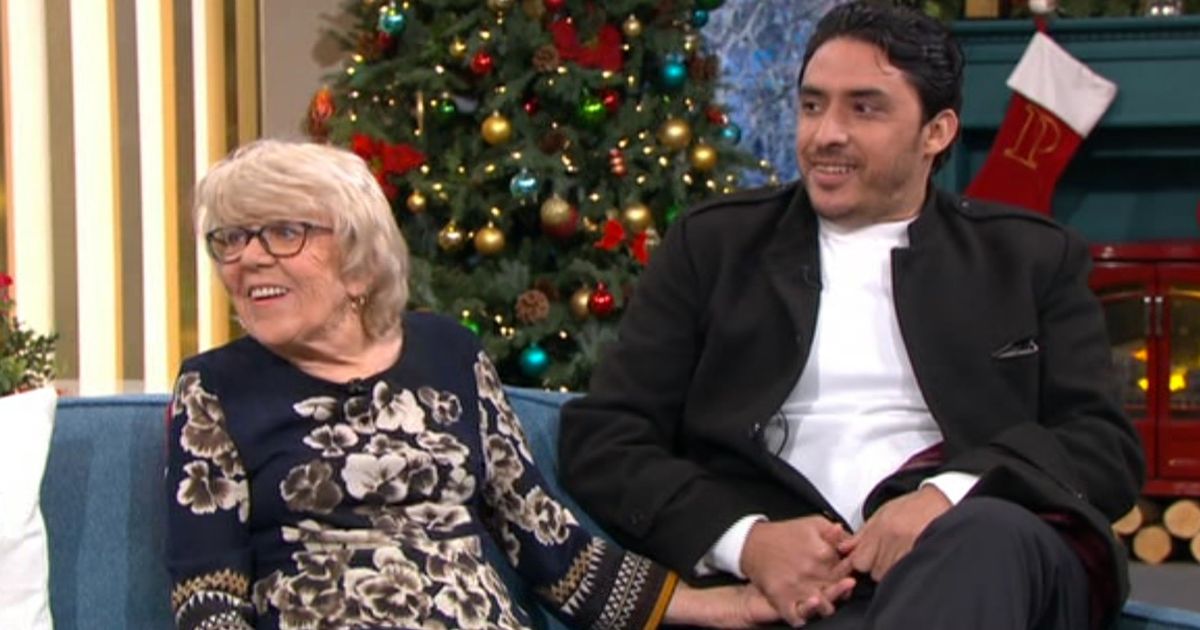 This Morning viewers first met Iris Jones last year on the show, as she revealed all on her romance with Mohamed Ibriham, and now the pair have reunited in the UK for the first time

Pensioner Iris Jones, 82, returned to This Morning on Tuesday, accompanied by her age-gap lover Mohamed Ibriham, 36, for the first time in their first live interview in the studio.

The show regular and Mohamed discussed their romance and their reunion, while Iris made another cheeky quip about their sex life.

While the pair had spoken with the hosts together before out of the UK, this was the first time both of them were in the studio.

Iris, now Iris Mohamedy after tying the knot with her husband last November, was thrilled to be back on the sofa, this time with Mohamed.

She had made a number of appearances on the show alone before, as visa issues kept the pair apart.

Egyptian Mohamed was unable to join his wife in the UK before November this year, with the pair having to talk over the phone instead.

But earlier this month, it was confirmed his visa was approved and he was able to join Iris, and they have remained inseparable ever since.

Pensioner Iris Jones, 82, returned to This Morning on Tuesday, accompanied by her age-gap lover Mohamed Ibriham, 36
(

Speaking to hosts Holly Willoughby and Phillip Schofield on Tuesday, Mohamed commented that they were both finally on the show as a couple.

Iris confessed during lockdown and when the visa issues were ongoing, she didn’t know what was going to happen or when they could be together again.

She explained: “No, no, living day to day. Living on a knife edge, really, you know. Just talking, messaging morning, noon and night, that got boring. I thought, ‘When is he going to come over?’.”

Iris revealed that when she learned her husband could go to the UK, she “couldn’t stop crying” happy tears.

She explained: “[I was] in Tesco, doing my shopping, in the fruit and veg aisle. Tears just poured down, I couldn’t stop crying. One of the assistants said, ‘are you alright?’ And I said, ‘Yes, I’m just very, very happy’.”

Mohamed was also thrilled, after the couple faced criticism over their age-gap romance.

He said: “I am feeling in the sky. ‘Iris!’ I was screaming in the street in Cairo. Some people think I’m mad, crazy. My wife, we’ll be together at last!”

While the pair had spoken with the hosts before together out of the UK, this was the first time both of them were in the studio
(

The pair reunited for the first time at the airport as Mohamed landed in the UK, and Iris said the moment was “surreal” and as though “I was outside of myself, looking in”.

It’s then that Mohamed said he felt the pressure now he was in the UK, due to the criticism he and his wife had received over their relationship, as well as accusations made against him about his motive for being with Iris.

“I am working… I have business administration. I’m not with Iris because I need something…. I am a rich man, I have a bungalow in Cairo.”

Iris refused to let the haters win though, saying: “Love conquers all. We’re going through problems now because Mohamed is adjusting to life in the west and I’m adjusting to having a man around the place.

“He is very, very tidy now, he hasn’t dropped anything on the floor, he asks if I want a cup of tea.”

They’re now planning to share their first Christmas together, with Iris detailing: “We don’t yet, we don’t know whether we’ll be invited to one son or the other or we’ll be on our own, they might think we want to be on our own, it makes no difference.”

Mohamed added of the support from Iris’ family: “They visit us in our home and say congratulations and they give their regards for us. I give you all of you and all the people around the world who support us, strong thanks, strong regard, because all of you support our love story.”

Mohamed said he plans for him and iris to be “together forever”, as Iris shared details on their sex life – as well as the fact the couple have been recognised out and about.

On having some alone time, Iris said: “Our time isn’t restricted, so we don’t need to ration ourselves. [The magic] will never go away, it’ll never be destroyed. Anyone who says to me, ‘How do you find love?’ You don’t look for love, it finds you.”