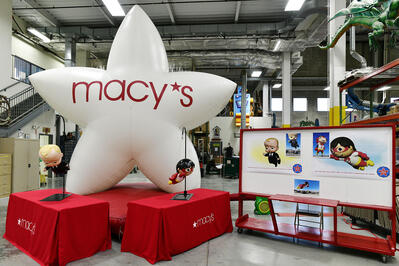 The COVID-19 pandemic has taken a lot from people in the year 2020, but some traditions will remain in place. The Macy’s Thanksgiving Day Parade is still happening on Thursday, Nov. 26. However, the event will look different this year as the parade will forgo the traditional 2.5-mile route along packed streets to avoid drawing large crowds and violating social distancing guidelines. The event will be broadcast-only so that everyone can enjoy the floats and performances from the comfort of their own homes.

The parade will air on NBC beginning at 9 a.m. in all time zones and last three hours. An encore will air from 2 p.m. to 5 p.m. local time. It will also air on NBC.com. For streamers, check out Verizon’s YouTube channel to watch a livestream of the event.

TODAY hosts Savannah Guthrie, Hoda Kotb, and Al Roker will host the event this year with Adamari Lopez, Jessica Carrillo, Rodner Figueroa and Nastassja Bolivar hosting the Telemundo simulcast presentation. The Broadway performances this year will come from the casts of Ain’t Too Proud – The Life and Times of The Temptations, Hamilton, Jagged Little Pill, and Mean Girls. Plus, the Radio City Music Hall Rockettes will bring their Christmas magic to the festivities.

Fan-favorite balloons like Astronaut Snoopy, Spongebob & Gary, Pikachu, and more will be joined by new Boss Baby and Red Titan from Ryan’s World balloons. Instead of the usual 80-100 handlers for the new crop of balloons, the inflatables will take an innovative, specially rigged approach of five specialty vehicles to keep them in the air without forcing too many people in the same vicinity.

To keep everyone safe, performers will wear masks and be staged six-feet apart. The majority of the parade participants are from the New York tri-state area and previously selected regional high school and college band performances have been pushed to be part of the 2021 parade.

The Macy’s Thanksgiving Day Parade may look very different this year, but there are still a lot of people working hard to bring some traditional holiday cheer to the festivities in this unprecedented year.