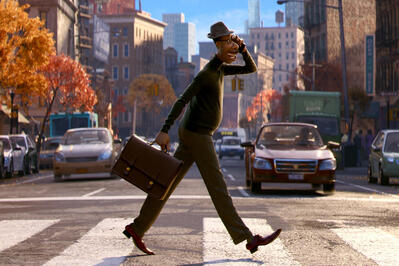 Hollywood wants to make sure we all have a Merry Christmas and one of the gifts they’re offering is Soul, the newest production from Pixar Studios. The film was originally scheduled to premiere at the 2020 Cannes Film Festival before debuting in theaters Nov. 20, but neither of those events happened due to the coronavirus pandemic.

Soul is set to premiere on Disney+ December 25, Christmas Day, making it available to all the streaming service’s subscribers. The film has an A+ voice cast. The animated feature stars Jamie Foxx as the lead voice of an aspiring jazz pianist who makes his living as a high school band teacher, and is the animation studio’s first film with a Black lead. The star-studded voice cast also includes Daveed Diggs, Phylicia Rashad, Tina Fey, Questlove, Angela Bassett, Alice Braga, and Wes Studi.

The Pixar film is the latest big Disney release to go straight to Disney+. The Mickey Mouse company also released Artemis Fowl, The One and Only Ivan, and Mulan on the service, though the latter was available for a $30 premium fee for three months before being made available to all subscribers on Dec. 4. Frozen 2, Onward, and Star Wars: The Rise of Skywalker also bid early on the service after their theatrical runs due to the COVID-19 pandemic.

The film will only be available on Disney+ subscription service, which costs $6.99 per month, or $12.99/month when you purchase the Disney+/Hulu/ESPN+ bundle.