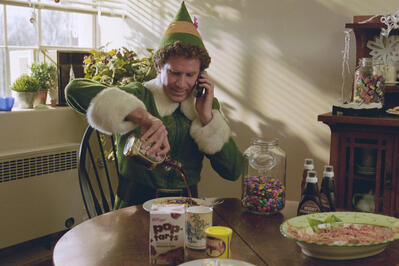 There’s so much holiday content to consume this time of year, but everyone knows that the real reason for the season is getting to revisit Christmas classics that continue to delight year after year. There may be no better example of that than Elf.

For the uninitiated, Will Ferrell stars as Buddy the Elf, a pure soul who loves to smile (it’s his favorite), make snow angels, and consume sugar. Orphaned as a child, Buddy was raised as one of Santa’s helpers until he grew up and realized he was indeed a human who accidentally ended up at the North Pole.

The 2003 holiday comedy from director Jon Favreau follows Buddy as he makes his way to his biological father, Walter (James Caan), a cynical children’s book publisher, in New York. He quickly finds that the non-toy-making world is a pretty harsh place for an open-hearted person like him, but he still finds a way to spread Christmas cheer for all to hear wherever he goes.

There are plenty of ways to watch Elf this year. AMC will air the film many times during December. While Elf isn’t available to stream on Netflix at this time, you can find it on Hulu or Amazon with a Starz add-on. You can also rent or buy at Amazon, YouTube, iTunes, and Google Play.