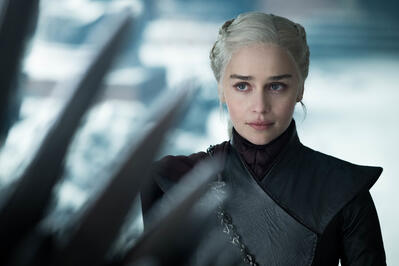 It’s been more than a year since Games of Thrones wrapped up, but that doesn’t mean you have to say goodbye to George R. R. Martin’s beloved A Song of Ice and Fire saga yet. HBO’s next dragon-packed series will be a Targaryen-centric prequel called House of the Dragon. It looks like we won’t be leaving Westeros anytime soon — not that we’d ever want to.

Though HBO’s other proposed prequel series starring Naomi Watts has been scrapped, fans will still get to dive back into Martin’s vivid world of dragons, mad kings, and epic betrayals with House of the Dragon, which has already been ordered to series. While details on the project remain scarce, here’s what we know so far about the upcoming show.

It’s all about the Targaryens. Set 300 years before the events in Game of Thrones, House of the Dragon is based on Martin’s novel Fire & Blood, which chronicles the first 150 years of the white-haired family. A planned second book covering the remaining history leading up to Robert Baratheon’s rebellion will offer up plenty of material for potential future seasons or spin-offs.

A Doctor Who star is among the show’s leads. Matt Smith, Olivia Cooke, and Emma D’Arcy have joined the lead cast of House of the Dragon, per Deadline. Smith will play Prince Daemon Targaryen, younger brother of King Viserys and heir to the throne. A masterful warrior and a dragonrider, Daemon “possesses the true blood of the dragon. But it is said that whenever a Targaryen is born, the gods toss a coin in the air.” Cooke has been cast as Alicent Hightower, the daughter of Otto Hightower, the Hand of the King. Raised in the Red Keep, Alicent is described as beautiful and regal, with a sharp political mind. And D’Arcy will play Princess Rhaenyra Targaryen, the king’s first-born child and a dragonrider.

It won’t premiere for a long time. HBO’s head of programming, Casey Bloys, told Deadline after HBO’s fantastic night at the 2020 Emmy Awards that production on the series was “underway” and that it was on track to debut in 2022, despite delays caused by the coronavirus pandemic.

The project has enlisted some Game of Thrones greats behind the scenes. The series was co-created by George R. R. Martin and Colony‘s Ryan Condal, the latter whom will pen the script and serve as co-showrunner alongside Miguel Sapochnik. Sapochnik, who directed major Game of Thrones episodes like “Battle of the Bastards” and “The Long Night,” will helm several House of the Dragon episodes, including the pilot.

More directors have been announced. Clare Kilner (The Alienist: Angel of Darkness), Geeta V. Patel (The Witcher), and Greg Yaitanes (Banshee) will round out the team of directors, Deadline reports.

Martin won’t be writing episodes any time soon. The author announced that he won’t script any episodes for the show until he has finished Winds of Winter, the next installment of his A Song of Ice and Fire series.

“I expect to be involved in all of this to some extent… and, who knows, if things work out, I may even be able to script a few episodes, as I did for the first four seasons of Game of Thrones,” Martin wrote in a blog post. “But… let me make this perfectly clear… I am not taking on any scripts until I have finished and delivered Winds of Winter. Winter is still coming, and Winds remains my priority, as much as I’d love to write an episode of House.”

The first season will be 10 episodes. Much like most seasons of Game of Thrones, Season 1 of House of the Dragon will consist of 10 episodes.

HBO dropped the first poster for the series. Check it out below.

No official premiere date has been set for House of the Dragon.