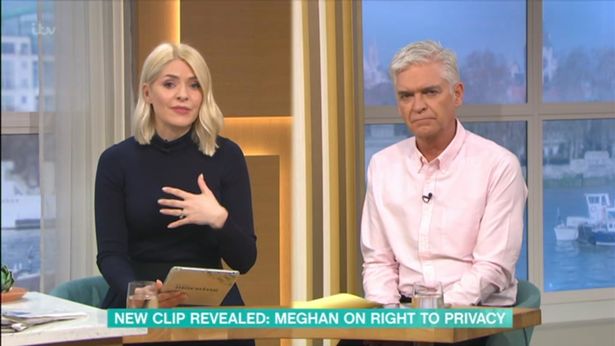 Holly Willoughby has opened up about the reason why she never shares photos of her children’s faces on social media.

The 40-year-old presenter, who is mum to Belle, Harry and Chester with husband Dan Baldwin, spoke about her own opinion of Meghan Markle’s concerns regarding privacy of son Archie.

Appearing on This Morning alongside co-host Phillip Schofield, Holly said: “I choose not to show my children’s faces because I know that’s the deal. If you show one photograph then they’re out there!

“They’re for consumption for everybody! Which is why I choose not to do it.”

This comes after Meghan’s friend Janina Gavankar appeared on the ITV show to speak about the Duke and Duchess of Sussex’s interview.

Asked to describe what Meghan was like, Janina said: “She is kind and generous. She is that kind of girl you go to if she has a problem… she’s low maintenance.”

Meanwhile Janina kept grinning and said that she was “surprised” by the questions and when questioned about whether there were any more truths to come out, she replied: “Yes I feel that we are in a new era.”

And viewers were left feeling incredibly uncomfortable by the whole interview, with one tweeting: “#ThisMorning Well @thismorning that should get an award for the most awkward pointless interview with the most obnoxious person ever! #Meghanssocalledfriend.”