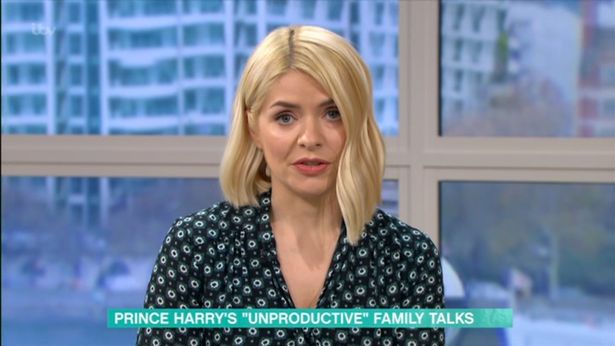 Holly Willoughby stepped in to support Meghan Markle, as she and husband Prince Harry were said to have “leaked” conversations with the royals to a US TV host – as This Morning viewers called for the show “to stop talking about” the royal couple.

The host stepped in after her co-host Phillip Schofield and the show guests questioned whether Meghan and Harry had permitted for the comments to be said on TV, or not – and whether they should have allowed it to be said.

Phillip suggested there was a feeling in the country of Meghan and Harry “stabbing a knife to the heart of the monarchy”, while it wasn’t clear whether this was something he thought himself.

Meghan’s friend Gayle King revealed this week to CBS breakfast show The Morning that talks between Harry, William and Charles had occurred, but had been “unproductive”.

While Meghan and Harry did not say this themselves on the show, Gayle said it on air after speaking to them.

Holly clearly didn’t agree judging by her face, and she tried to interrupt saying: “But don’t you think…”

When she got to have her say, she questioned if actually Meghan had spoken to Gayle about the situation as it wasn’t a situation she thought should be kept behind closed doors.

She said: “I wonder whether it was because Beverley, she feels that these aren’t issues that should be dealt with behind closed doors.”

Meanwhile, viewers of the show hit out at the segment on Twitter with one saying: “MY GOD WHY ARE WE STILL TALKING ABOUT HARRY AND MEGHAN.”

Another wrote: “idk who Beverley is but Meghan didn’t want people to ‘just say nice things about her’ she wanted them to stop racism against her.”

A third said: “Was nice to have a few days free of Harry and Meghan.. now we’re back on them.”