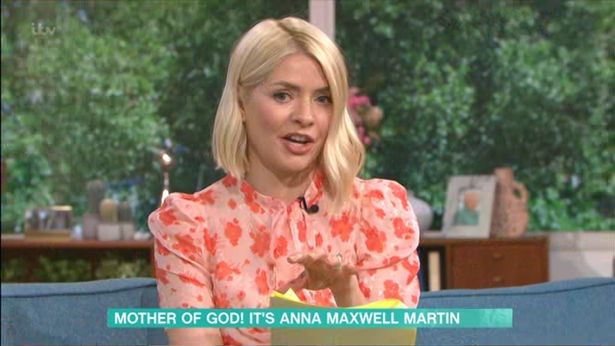 Holly Willoughby accused Line of Duty star Anna Maxwell Martin of trying to “pull the wool over their eyes” after denying that she had noticed her character, DCS Patricia Carmichael, of tapping her pen four times during yesterday’s episode.

It was previously revealed in the hit BBC cop series that ‘H’ was likely four people, rather than one, after Matthew ‘Dot’ Cottan used morse code to tap four times while he lay dying.

So when conducting her interview with DCI Joanne Davidson, some eagle-eyed fans noticed Carmichael tapping her pen four times – which some interpreted as a hint that she could be ‘H’.

Appearing on This Morning, Phillip Schofield questioned her about the moment, but she insisted: “I think I was just bored. Those scenes are very long. I think I was like, ‘What am I saying next?’”

However, Anna insisted that she felt her character was “misunderstood” and “insecure”.

“She’s misunderstood and she’s trying to do her job,” Anna replied. “She probably needs a nice cuddle.

This Morning viewers also noticed Anna’s constant laughing throughout the interview as she claimed she “couldn’t remember”, which most attributed to her being nervous that she could accidentally give away a spoiler.

One fan tweeted: “I think Anna’s petrified about letting something slip, that’s why she’s laughing so much.”

While another commented: “#annamaxwellmartin is on #thismorning. She’s just laughing through the entire interview, and giving nothing away.”

A third wrote: “Anna Maxwell Martin’s laughter is so infectious and the antipathy of Carmichael on #ThisMorning #LineofDuty.”