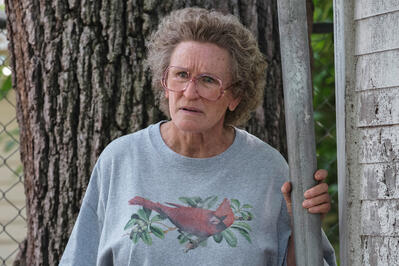 Who can know the mind of a successful Hollywood celebrity? We who chat about them seem convinced that some would do just about anything for that holiest of grails, the Oscar statuette. Then they give an interview and appear to be reasonable, even humble people. A project like Netflix’s Hillbilly Elegy is here to remind you: These people are actors! Of course they know how to appear sane on television! They surely will do anything if they think they’ll get an award.

Amy Adams has been nominated for an Oscar six times, only to watch someone else win it. Glenn Close has done that dance seven times. It has to sting. It has to sting like hell. Hillbilly Elegy offers both of these women roles seemingly crafted in an awards laboratory. For Adams, she gets to play a flawed mother of two, vivacious one minute, then hurting for a heroin fix the next. For Close, who seems to have the same amount of screen time as Adams but is nevertheless positioned by award-watching websites as angling for a supporting nod, she gets to “ugly up” with a ton of prosthetics, try a regional dialect, and spew forth insults under the guise of tough love.

There is a problem here, though. This is a story you’ve seen dozens of times before, the dialogue is somewhere between mediocre and poor, and the drama is ultimately flat. Hillbilly Elegy and its Oscar dreams are all sizzle, no steak.

Neither Adams (as Bev) or Close (as “Mamaw”) are the star of the film. We enter this world through the eyes of J.D., split young-and-old between Owen Asztalos in the late 1990s and Gabriel Basso in the early 2010s. Basso’s J.D. is inches away from securing his ticket out of Appalachia and economic disenfranchisement with a gig at Yale Law School. He is called back to Ohio on the eve of a big interview when his mother, Bev, ends up in the hospital with a drug overdose. We then jump back and forth, to witness his struggles growing up, and how his Mamaw, by forcing him to stop being lazy and to do the dishes, bent his arc toward wealth and freedom.

Hillbilly Elegy, J.D. Vance’s memoir, is something of a publishing sensation. Its message of personal responsibility and hard work is one that resonated with a great many, and the book became a touchstone in the “drain the swamp” era of electoral politics. Vance himself is now a conservative darling (his wife used to clerk for the controversial Supreme Court associate Brett “I Like Beer” Kavanaugh) whose statements, to put it delicately, can sometimes step into questionable waters.

But for better or worse, this isn’t the story director Ron Howard and screenwriter Vanessa Taylor have decided to tell. Those coming to this looking for material with which to “own the libs” will be disappointed, as will anyone looking to sneer derisively at MAGA dolts in flyover country. What we’re left with is just a run-of-the-mill story about someone with a lousy childhood. And Hillbilly Elegy lacks the unusual setting of, say, What’s Eating Gilbert Grape? or the remarkable performances of This Boy’s Life. All it’s got is Glenn Close and her ridiculous mugging.

Amy Adams is certainly acting her heart out here, but nothing short of hurling herself onto a live grenade is going to take attention away from Close. With those enormous glasses, a range of goofy faces itching to get memed, and truly laughable lines, like dividing all of humanity into “good Terminator, bad Terminator, and neutral,” Close has given champions of camp cinema a treasure for the ages.

I’m sure some out there will be moved by Mamaw’s lessons from the School of Hard Knocks, but when she screams “get out, before I cancel your birth certificate!” at her chubby grandson, it is impossible not to laugh. “Get that calculator or don’ bother gettin’ back in,” she says with a deadly seriousness, that, if nothing else, will make the marketing department at Texas Instruments smile.

It’s a weird world and this is a particularly weird year. Maybe Close’s Mamaw will end up taking home the gold. I mean, this performance certainly brought me joy, even if it wasn’t exactly the kind that was intended. As for the film itself, it’s really too flat to get worked up about.

There’s a moment toward the end when you think J.D. might be abandoning his mother in her hour of need, but this is undercut when he says his sister is on the way. Nothing really happens in this film. The memoir was more about themes and ideas, so the grafted narrative can’t be too spicy and remain “based on the book.” Partisans on the left and right may root around for either poisonous or righteous messaging, but I don’t think it’s worth the effort. As a film, I say head to the hills.