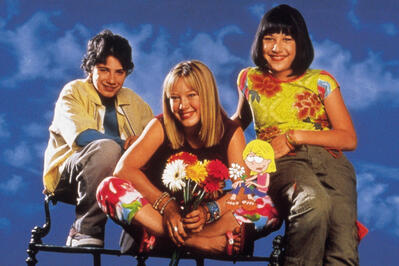 It’s official: The world will not see an adult Lizzie McGuire revival, at least not for the foreseeable future. Series star Hilary Duff confirmed the sad news via Instagram on Dec. 16, saying that an agreement could not be reached about the creative direction of the series on Disney+.

“I’ve been so honored to have the character of Lizzie in my life. She has made such a lasting impact on many, including myself,” Duff wrote. “To see the fans’ loyalty and love for her, to this day, means so much to me. I know the efforts and conversations have been everywhere trying to make a reboot work but, sadly and despite everyone’s best efforts, it isn’t going to happen.”

She continued, “I want any reboot of Lizzie to be honest and authentic to who Lizzie would be today. It’s what the character deserves. We can all take a moment to mourn the amazing woman she wold have been and the adventures we would have taken with her. I’m very sad, but I promise everyone tried their best and the stars just didn’t align. Hey now, this is what 2020 [is] made of.”

The beloved show’s revival was first announced in August 2019. In January 2020, production on the series halted over what Duff said were creative differences regarding how mature the tone of the new series should be, with Disney+ apparently wanting to keep the revival more in line with the tween-appropriate original series.

Duff, who was also executive producing the revival, spoke out in February 2020 about her desire for the series to explore every aspect of a 30-something Lizzie McGuire’s life. The actress said that she hoped the revival could make a move to Hulu, Disney’s more adult-friendly streaming service, as Love, Victor had done. But Duff’s December 2020 Instagram statement seemingly confirms those negotiations broke down.

But while the revival won’t be moving forward, we’ll always have what little we learned about Lizzie’s modern life during the early days of the show’s production. Below is everything we knew about the Lizzie McGuire Disney+ revival series, including which original stars were supposed to return.

Disney Plus: Everything to Know About the Streaming Service

Lizzie would have been 30 years old in the revival. The new series was to pick up with Lizzie nearing her 30th birthday, living in a picturesque Brooklyn apartment, and working her dream job as an assistant to a fancy New York interior decorator. “Just like me and everybody…who grew up with her, Lizzie is also grown up. She’s older, she’s wiser, [and] she has a much bigger shoe budget,” Duff joked at the 2019 D23 Expo.

And her wardrobe was just as colorful as ever — a photo from the show’s first day of production, released in October 2019, showed Lizzie sporting a bright coat and toting a massive stuffed alpaca through the icy streets of NYC.

Alpaca your bags! #LizzieMcGuire, an original series coming soon to #DisneyPlus, is heading to the Big Apple for the next chapter in Lizzie’s story. Check out this exclusive photo from the first day of production. pic.twitter.com/5h7ONvGPm9

She was going to have a boyfriend. As Duff told the packed room at the D23 Expo, Lizzie has “kind of the perfect life right now,” and that includes “a dream guy who owns a cool Soho restaurant.”

Gordo was back! Adam Lamberg was set to reprise his role as Gordo, one of Lizzie’s middle school best friends. Toward the end of the original series, the two realized they had feelings for each other and even kissed in 2003’s The Lizzie McGuire Movie. Duff said in a statement, “I can’t wait for fans to see what he’s up to 15 years later and how he fits into Lizzie’s adult world.”

Some of Lizzie’s other junior high classmates had the potential to appear. Duff told Entertainment Tonight in 2019 that “chances [were] strong” we would see other fan-favorite characters like Miranda (Lalaine), Kate (Ashley Brillault), and Ethan (Clayton Snyder).

The whole McGuire family was set to return. Disney has confirmed that the rest of the McGuire clan — Hallie Todd’s Jo, Robert Carradine’s Sam, and Jake Thomas’ Matt — would also be returning for the revival. The actors even took a nice family photo of their first reunion in 15 years at a table read.

Cartoon Lizzie would be back too. Just because Lizzie’s older and seemingly living her dream life, it doesn’t mean she won’t still need an animated version of her inner thoughts to comment on her life! Lizzie’s 13-year-old animated alter ego, who provided funny and revealing commentary about what Lizzie is really thinking, was written into the revival as well.

Lizzie was not going to have kids, at least not yet. Like a lot of millennials in their 30s, Lizzie had not chosen to become a parent just yet, Duff confirmed to Entertainment Weekly.

The first episode was set in New York. Duff also told Entertainment Weekly that based on the events in the premiere episode, Lizzie may not have stayed in New York City for long.

We already had the first new footage. In a sneak peek at what was coming to Disney+, Disney included the first footage from the Lizzie McGuire revival.

Lizzie McGuire and the 2003 followup movie are currently available to stream on Disney+.