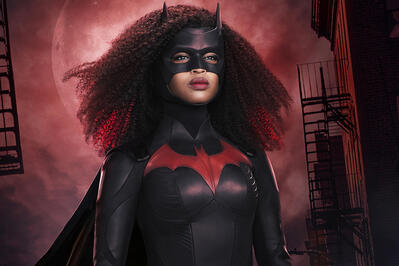 After months of waiting, Warner Bros. and The CW have released the first photos of Javicia Leslie in her own Batwoman suit, and it looks like she is officially ready to fight some crime. Leslie, the first Black woman to play a live-action Batwoman, will star in Season 2 as Ryan Wilder, who will take up the Batwoman mantle from Kate Kane in the series. Leslie was cast in the role this summer after Ruby Rose departed the series.

While Ryan will initially don Kate’s suit at the beginning of Season 2 as she gets used to her new role within Gotham City, eventually she will remake the suit to fit her needs as a crimefighting vigilante. Warner Bros. and The CW released two photos of Leslie in Ryan’s eventual suit, which features new red gauntlets and deeper laser etching for a better silhouette. The suit also leaves room for an overflowing naturally curly wig with red streaks.

The suit was designed by Batwoman costume designer Maya Mani and created by Ocean Drive Leather. The wig was created by Janice Workman.

“Ryan’s journey starts from a place of ‘What can this Batsuit do for me?’ But it’s not long before she realizes the power of its symbol and what it can do for everyone else in Gotham City,” Batwoman showrunner Caroline Dries said in a statement. “As Ryan embraces everything that makes her special, she adjusts the suit to fit her physically and figuratively. This meant creating a new body design and new cowl that was undeniably a statement that screamed ‘powerful.’ Maya Mani sent me her drawings and I loved it. The wig was something we never perfected in Season 1, and Janice Workman crushed it with this new take. Javicia and I saw various prototypes of styles and red ombres, and at one point we were trading our own iPad-doodled versions. Janice translated that into what we are looking at now. When I see it, I smile. It makes me feel inspired.”

Upon learning of Leslie’s casting, Rose shared her reaction on Instagram, writing, “OMG!! This is amazing!! I am so glad Batwoman will be played by an amazing Black woman. I  want to congratulate Javicia Leslie on taking over the bat cape.  You are walking into an amazing cast and crew.  I can’t wait to watch season 2 you are going to be amazing!!”

There’s no word yet on how they’ll introduce Wilder into the fold, but we can’t wait to see the God Friended Me alum mixing it up with Gotham’s finest.

Batwoman, with Leslie at the center, returns in January 2021 on The CW.

Batwoman Season 1 is currently streaming on The CW and Netflix.