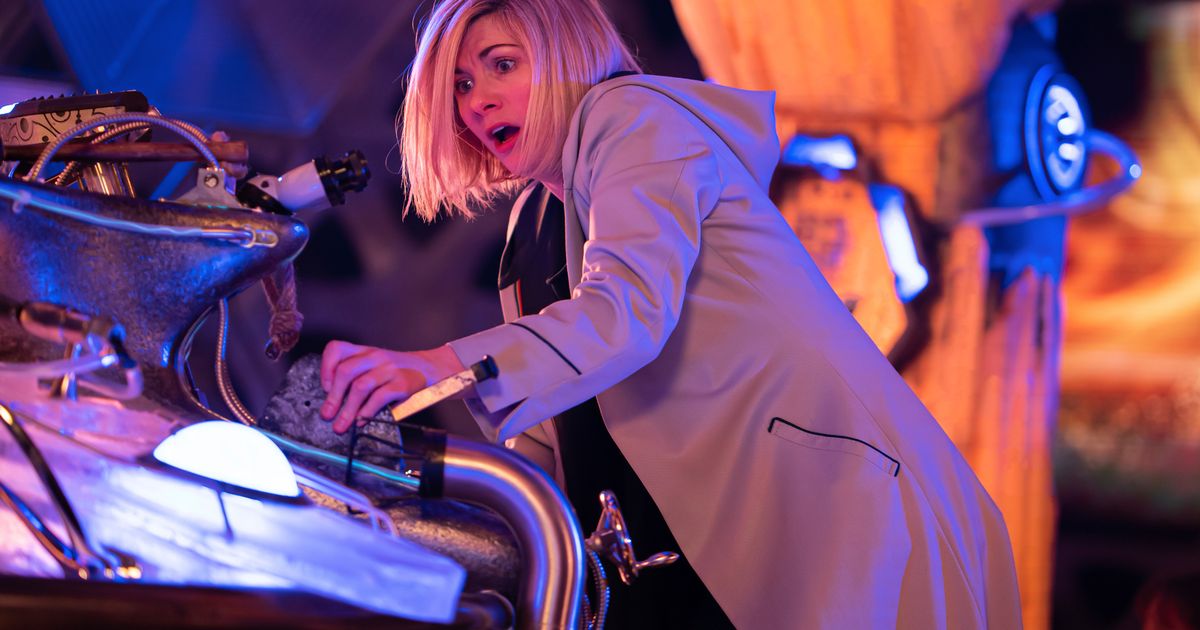 Jodie Whittaker is an emotional wreck as she prepares to give up her sonic screwdriver at the end of filming the new Doctor Who.

The series launches on Halloween weekend and tells one story, Flux, across six episodes, followed by three specials to air next year.

As filming on all nine instalments wraps, Jodie admitted that she wept when asked how she felt about the crew, who have managed to keep the shoot going for nearly a year throughout the pandemic.

“I lost it, I was absolutely gone, crying my eyes out,” she laughed. “I know that this is the best time I will ever have on a job. I’ve felt like that from the start.”

Jodie Whittaker got emotional while filming her last scenes
(

The actress, 39, is now prepared to hand on the iconic role to whoever becomes the 14th Doctor. “Letting go of it, I feel I’ll be filled with a lot of grief because even thinking about it makes me upset. But this show needs new energy. The joy of this part is that you hand on your boots. I don’t know who to, but whoever it is, what a thing to be able to go – ‘you’re going to have a right time’.

“If everyone comes up to you forever going ‘I’m a Doctor Who fan’ then that’s an absolute joy. Of all the things you’re always going to be associated with, thank God it’s the thing I’ve loved so much.”

She paid tribute to Mandip Gill, who plays the Doctor’s loyal sidekick Yaz.

John Bishop in Doctor Who
(

“Being on set every day with Mandip is amazing because she’s one of the funniest people I’ve ever met. She’s like a rock – but a really funny rock.”

Mandip said the highlight of this series was trying to outdo Jodie during a stunt for the first episode in which they had to hang upside down above an “acid ocean”.

She explained: “We were excited – cut to hanging upside down for an hour, I was like ‘my head’s going to explode, it’s not fun any more, the harness is too tight, I can’t scream’. Then it got a bit competitive – I got a clap for doing extra twirls, just because I wanted to out-twirl Jodie! I hope that bit makes it in, because it was really painful.”

She said trying not to show weakness in front of the returning monsters the Weeping Angels had also been torture. “Trying to not blink in the freezing cold was so difficult, we had tears streaming from our eyes and they’d say ‘can you do it again?’ No!”

Comedian John Bishop, who plays new companion Dan Lewis, revealed he could only take the part offered by writer Chris Chibnall because his stand-up tour was cancelled by Covid.

“We had a conversation about a character that Chris had thought of but I was going on tour so I reluctantly said I couldn’t do it. Then, luckily for me, there was a global pandemic and that meant the tour was suspended and I could do it.”

He said playing Dan – who also does battle with the Sontarans, Cybermen and the Ood plus new monsters including the Karvanista – had been very different to what pal and former show star Bradley Walsh had told him.

“He said you’ll love this job, you’ll have a laugh with everybody, it’s such a social set – then I spent nine months in a flat on my own in Cardiff.”

Despite this, he was thrilled to be involved.

“This lasts beyond anything else you might do in your career. It had all the elements I would have wished for – brilliant scripts, incredible people, friendships that I know will last beyond this. It is one of those things I’ll look back on and go ‘wow. I was lucky to do that’. And you don’t say that very often.”

Chibnall, who leaves alongside Jodie after completing three series, said the new run had turned out very differently to how it was originally planned.

“There was a point we didn’t think we’d be able to make a series at all, and then a point when we had to reinvent it. We could do lots of little stories set in a room with two people or we could blow up the universe go from there. We went with blowing up the universe. It’s all one story, there’s six chapters. It harks back to the show in the past when you had multi-episode serials. There are lots of cliffhangers, some of our biggest ever.”

Chibnall said he wasn’t sad to be leaving. “You couldn’t enjoy it any more than we’ve enjoyed it. I don’t feel any sadness because we came in and did what we set out to do. It feels really good.”

He will now hand over to returning showrunner Russell T Davies, but hinted that finding his successor had been less than straightforward. “It’s taken longer than we expected if we’re being honest, I’ve been throwing batons at people for about a year now and finally someone’s picked it up.”

BBC boss Piers Wenger said the new series would be the “rollercoaster to end all rollercoasters” as the Doctor and pals faced their “biggest ever threat”.