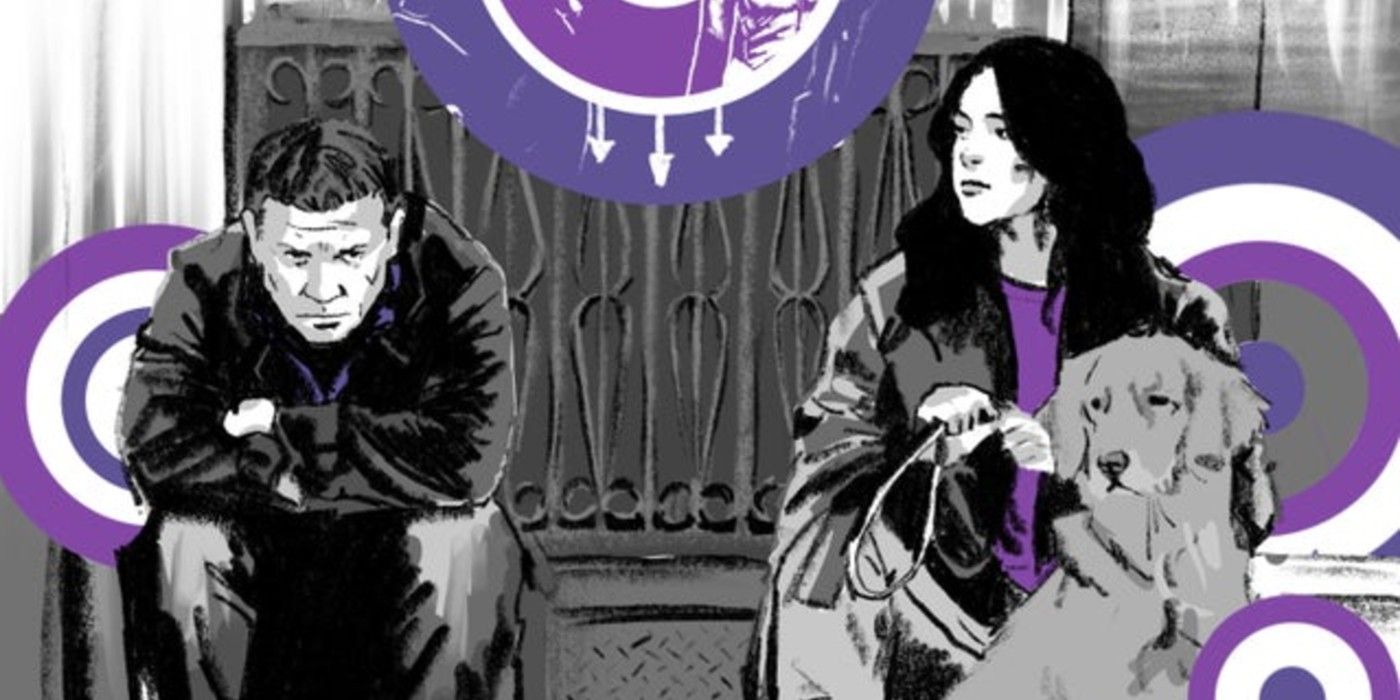 Disney+’s upcoming Marvel series Hawkeye gets a new fan poster imagined in the style of a beloved comics run. Though Marvel’s Disney+ takeover will kick off this week with WandaVision, many fans are already looking ahead to the future. 2021 will feature the premieres of numerous MCU-set shows on the streaming platform, with Hawkeye coming near the end of the year. Jeremy Renner will once again play skilled archer Clint Barton, and this time he’ll get to be the center of his own story. He’ll also be joined by some familiar faces from the comics: Lucky the Pizza Dog and Kate Bishop (Hailee Steinfeld).

At this point, little is known about Hawkeye‘s story, though it’s certain it will take place after Avengers: Endgame and will finally delve into Clint’s history. The series will be loosely inspired by the comics run by Matt Fraction and David Aja. That series saw Clint training Kate, though presumably some changes will be made to how they meet. Hawkeye has been in production since late 2020, and numerous set photos of Renner and Steinfeld have made their way online. While what they’re doing is unclear, they’re definitely working together.

The Fraction and Aja run has been warmly received by fans, and now it’s provided the twist for this new Hawkeye fan poster. Shared by A-I-E-K, the poster takes Renner and Steinfeld from the various set photos and recreates them in Aja’s style. The purple circles make the black and white design pop. Check it out down below.

Aja’s art style is pretty distinctive, and it’s really cool to see it translated to Hawkeye‘s upcoming look. By depicting Renner and Steinfeld in this way, it really looks like they’ve leapt off the pages of comic books. That’s quite possibly every comics fan’s dream. In the case of Steinfeld, the poster seems to solidify what a great pick she is for the role of Kate. Prior to her casting, Steinfeld was often one of fans’ top choices to play the Young Avenger, and it was thrilling to hear she had finally got the part. By placing her directly in the pages of a comic book, it’s abundantly clear that she really looks the part.

With shows like WandaVision and The Falcon and the Winter Soldier coming first, it’ll be a while before more concrete information about Hawkeye is revealed. Most likely, Marvel will wait until production is finished before sharing things like plot details and official images. In the meantime, fans will continue demonstrate their creativity while they wait for the series to arrive.

Hawkeye will premiere on Disney+ in late 2021.