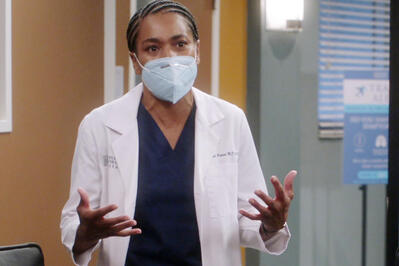 [Warning: The following contains spoilers from Thursday’s winter finale of Grey’s Anatomy. Read at your own risk!]

Grey’s Anatomy may have almost broken Maggie Pearce (Kelly McCreary). The world’s battle with COVID-19 rages on, the virus will continue to be the main star of the show’s seventeenth season, and it’s putting all of the doctors of Grey Sloan Memorial Hospital under back-breaking pressure, with Maggie seemingly at the precipice of a meltdown in the show’s winter finale.

The episode began with Meredith (Ellen Pompeo) — Maggie’s sister — waking up to what has felt like weeks of being unconscious, only to succumb again to her symptoms at the end of the episode. Mer’s seemingly miraculous recovery seemed to help boost Maggie’s spirits but the finale ended with Meredith having to be put on a ventilator and the doctors torn on whether this was a necessary step to save her life, or a sign that it might soon be time to say goodbye to Meredith Grey.

If that wasn’t tense enough, Station 19‘s kidnapping storyline carried over into the episode as well, with the teenage girls and their alleged kidnapper getting their post-fire care at Grey Sloan Memorial. The case may have the biggest consequences for DeLuca (Giacomo Gianniotti), who is the closest to discovering the connection between the kidnapper and the sex trafficker he confronted before his breakdown in Season 16, but the tragedy of what happened to the girls, and what could have happened if the Station 19 firefighters hadn’t stepped in, had a profound effect on multiple doctors in the hospital.

Maggie was one such doctor as the case brought to the surface how Black women and girls in the country are far less protected from horrific systems like sex trafficking and kidnapping than other people. Maggie’s frustration over the injustice, combined with the outrageous number of Black and Brown people she has had to watch die from COVID-19, despite Seattle only having an eight percent Black population, led to a breakthrough moment between Maggie and her “sister” Amelia (Caterina Scorsone). TV Guide spoke with McCreary about the finale, her episode-defining speech, and how Grey’s Anatomy is continuing its best season yet while tackling the most difficult subject matter.

Let’s start with the end of the episode. Meredith is unconscious again and hooked up to a ventilator. How is that going to affect Maggie when the show returns?
Kelly McCreary: At the end of the episode, Maggie had left the hospital — after a rough day, by the way, after a really rough day — and it’s a huge blow to find out that after the hope of Meredith making some improvements she has gone back in the opposite direction, and what I think is so frightening but also kind of profound about that moment is that it feels so symbolic. Not just of lots of patients experience with COVID, right? We know that this thing goes up and down and it’s unpredictable and frightening in that way. But it’s also really feels like a metaphor for the state of the world that we’re in right now. Things seem to be on track, and then there’s a surge. Every time things seem to be kind of evening out there is some disruption and chaos and I feel like that is so resonant with so many people’s lives right now. Maggie is no different. We’re all just trying to find our footing at this time, and yet things seem so unstable. That’s exactly what happened.

What is it like telling this story while the world is still in the middle of experiencing the pandemic?
McCreary: This season is dedicated to frontline workers and it is a hospital show. We play doctors so it only follows that our POV follows our doctors. The reality is that our doctors in this country are very, very in the thick of things, more so now than they have been before. It’s funny, because part of the experience of actually playing the scene as an actor is, you don’t know what’s going to happen. You can’t play the end of the scene. You have to stay in every single moment and treat each thing that happens like it’s brand new, even if it’s your fifteenth take. That’s because that’s how life is. You don’t know how things are gonna turn out. We can’t predict what direction things are going to go in. This sort of storyline, while playing out in real life … we don’t know which direction to go in more than we know as a country, how long we’re going to be in this thing. It just feels very much like an exercise in kind of staying in the present moment.

You have an incredibly powerful monologue that Maggie delivers to Amelia about how differently the pandemic and the kidnapping of these young girls affects her. What was it like to film that?
McCreary: That was a really incredible [scene]. Felicia Pride wrote that monologue. It is the culmination, the weight of so much. Every one of the doctors on our show is carrying something heavy. It’s very specific to their identities and their own past trauma. That speech is such an opening into Maggie’s experience of COVID and everything, and all of the upheaval in the world right now — this is the lens through which she sees it. As a Black woman she can’t help but see the impact on people who look like her, and have an experience that is similar to hers .I’m so grateful [to Felicia] for writing that speech and creating that opening into Maggie’s psyche, which I can relate to personally and I know a lot of people have the same concerns. How and why [have Black women] become invisible while at the same time being exalted and celebrated for saving democracy, for example. At the same time, we are so outside of the margin of so much.

I was nervous. I just wanted to do this justice. There’s so many ways into the pain of this, of trying to connect with her sister in this moment and have an impactful communication with Amelia, and yet you got to get back to work. It’s just a moment in her day. There was such care taken by our director, Pete Chatmon, who happens to be my husband. He understood that was a speech that needed time and space to be sort of figured out and landed on so that we could get all of those moments right. I was really grateful to have him at the helm of that scene.

Does this speech shift Maggie and Amelia’s relationship in any way given that Maggie is pointing out that even if they are sisters, they don’t experience the world the same way?
McCreary: What I think is really great, actually, is that it is not the first time they’ve had a communication like this that distinguished Amelia’s experience of the world from Maggie’s. Another time that we did, I think it was in Season 12. I’m not going to remember, but it was at the end of an episode when Maggie kind of [called] Amelia on the concept of unconscious or implicit bias and opened her eyes to that reality. What I love is that it is an ongoing conversation between Maggie and Amelia because if it’s not your experience, you’re not gonna always get it the first time. If you haven’t continued to investigate it, you’re not going to get it. You have to keep being engaged with these questions. Why do different people experience the world in different [ways]? I love that our show [tackles this] in every single episode. This conversation between Maggie and Amelia just makes it more explicit.

What are you hoping people absorb from this episode after they watch it?
McCreary: I am hoping that people are able to sit back, and if they didn’t know already, I hope they’re able to say, “Okay. Wow, I really understand why the experience of Black women and girls in this country is different. And I want to know why that is, and how we can make it possible to create circumstances and environments where Black women and girls thrive to the same degree that everyone else in this country gets to — that they experience joy and opportunity, and fun, and make mistakes, and see the fullest expression of themselves as much as anybody else in this country. I hope that people are able to kind of get with the reality of that difference and know that we actually do have the power to change it.

What are you most excited for fans to see when Grey’s Anatomy returns in 2021?
McCreary: I’ve said this a couple of times, but I think this is my favorite season of the show. I think that the richness with which we are exploring every single one of the characters on the show right now is so fun to watch. That continues, and it continues to be incredibly moving.