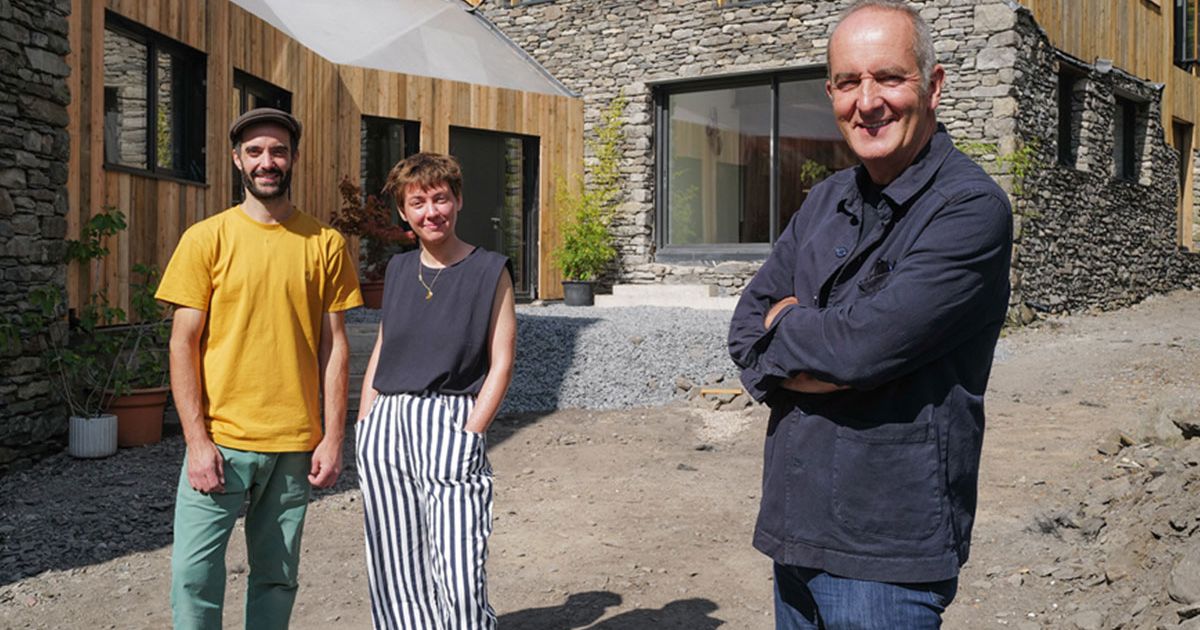 Grand Designs viewers were left gobsmacked after a young couple built a £300,000 home that didn’t include a kitchen.

Kevin McCloud met Ruth and Rob from Cumbria during Wednesday’s edition of the hit Channel 4 show, and discovered they were about to embark on an ambitious plan to renovate a dilapidated 200-year-old former mill located in the picturesque Lake District.

The optimistic young couple said they wanted to transform the building, which was classed as an ancient monument by Historic England, into a family home and workspace in just 18 months, with a budget of £250,000, including a £100,000 loan from Rob’s dad.

But their dream to renovate the crumbling structure, which they bought for £110,000, didn’t go according to plan, as they had to bulldoze the building in the first 15 minutes of the show after they were told it wasn’t structurally sound.

Kevin McCloud was impressed by the project, which cost more than £300,000

“This is going to be a disaster,” one viewer tweeted. “Half an hour in and they haven’t even started building anything. Never a good sign…” another added.

With their budget spiralling to £300,000, Rob and Ruth then had to spend £20,000 on a tree surgeon, who was tasked with clearing the rotten trees on the site, in a move which horrified viewers, as Rob had expressed his love for woodland as being one of the main reasons they bought the plot.

“Ya we loved the ruin and the trees so we thought let’s demolish the lot. Sickening,” one furious viewer fired.

Rob and Ruth were determined to transform the old mill, which they had bought for £110,000

But the best was yet to come, as host Kevin revisited the couple three years after they first began the ambitious project, only to discover that Rob and Ruth were missing a key part of any family home.

“Just over 3 years to build…and they don’t have a working kitchen what’s the point #granddesigns,” a fan mused on Twitter.

“Imagine having that nice house. But a camp stove kitchen,” another added.

“It’s a huge home – great effort from the couple but three and a half years later, no electricity and no working kitchen yet?! #granddesigns,” one viewer asked, as another Twitter user suggested having no kitchen could be a scam.

“No kitchen? Is that a council tax dodge? No kitchen so not fit for habitation. #GrandDesigns,” they speculated.

The couple’s bold vision was to keep as much of the character and style of the original building, with timber clad walls slotted in and around the structure to help them create a warm and inviting home.

Rob and Ruth seemed content with their £300,000 home that had no kitchen

But when Kevin met Rob and Ruth again, he remarked that their home, tucked away in the Lakes, was reminiscent of a certain fantasy drama show.

“Wow, that is the set for the Game of Thrones,” he said. “I mean that in a really, really complementary way – it’s brilliant.”

Despite it missing a kitchen, with Rob and Ruth using a gas camping stove on a wooden worktop instead, Kevin praised the huge project, and said it was an “exciting” building.