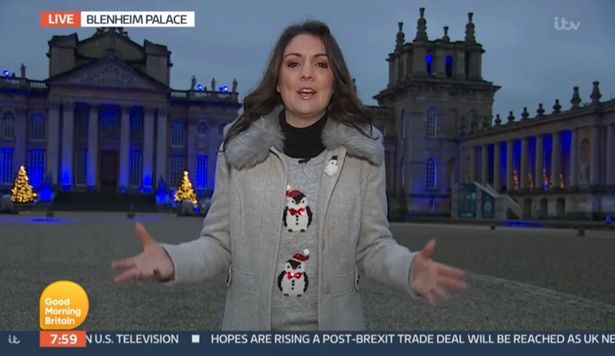 Good Morning Britain viewers have been left outraged as weather presenter Laura Tobin hosted a segment after travelling from Tier 4.

Laura hosted the early morning weather segment from the stunning palace, with Christmas lights all around, and she said tickets were readily available because those in Tier 4 had to cancel.

However, many viewers pointed out that Laura, who usually hosts from the London ITV studio, should not have travelled out of London because it is in Tier 4.

A fourth added: “#gmb is it really necessary for Laura to be at Blenheim Palace, travelling from tier 4 or am I missing something?”.
“Laura has gone from tier 4 to tier 2 for this VT surely that’s not allowed #gmb,” remarked a fifth.

And a sixth shared: “Given the Tier 4 restrictions on travel, why has Laura and her crew travelled unnecessarily to a Tier 2 area to tell us what the weather forecast is? This is not essential travel, sets a bad example to the public, and risks spreading the new strain of the virus. No loopholes here.”

*Good Morning Britain airs weekdays on ITV at 6am