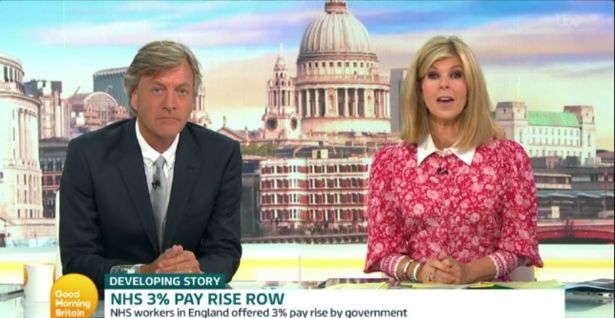 Good Morning Britain viewers were left baffled on Thursday when host Kate Garraway recalled an awkward encounter with a giraffe.

The mum-of-two was hosting the ITV breakfast show alongside Richard Madeley when they crossed over to weather presenter Laura Tobin who was live in Chessington.

Laura, 39, was lucky enough to be feeding giraffes and Kate couldn’t resist commenting on their “extraordinarily long tongues”.

Turning to Richard, Kate laughed and said: “I remember when one once stole a croissant straight out of my mouth. It was a bit of tongue action.”

But GMB fans tuning in at home were stunned by her admission and took to Twitter to comment.

Back in 2016 she told Ben Shephard and Susanna Reid on GMB: “I have fed a giraffe from my mouth. They have got incredibly long black tongues.

“I was eating a lovely croissant and I put it in my mouth, and the giraffe came down and whipped it out.

“Taking food from me is a risk but even I didn’t mess with a giraffe!” she added.

Later on Thursday’s show, Kate was stunned when she and Richard crossed over to Ranvir Singh ahead of ITV’s Lorraine, and she revealed: “Giraffes don’t have vocal chords, did you know that Kate?”

“Maybe that’s why they’re so silent and graceful,” Kate replied. “That is amazing!”