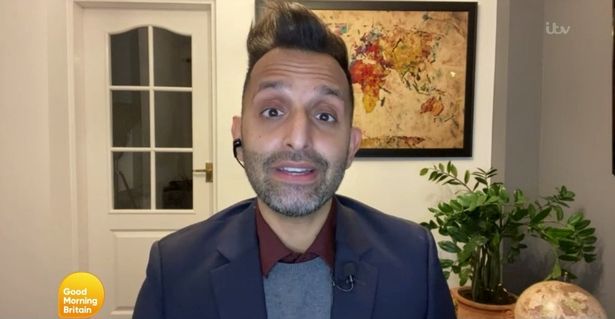 Good Morning Britain’s Dr Amir Khan has claimed there is “no scientific basis” to the government’s warning against hugging family in the home at Christmas.

The doctor appeared on GMB today as he was probed by Kate Garraway and Ben Shephard over the new tier restrictions and the five-day Christmas break.

On Thursday, the government confirmed 99% of people will be in either Tier 2 or Tier 3 – where all indoor social gatherings are banned.

But Ben pointed out that surely being in such close proximity in a home for hours meant that it didn’t matter if you hugged relatives as you would likely transmit the virus regardless.

He said: “If you spend all day with your family and you’ve been on top of them, you’ve had lunch opening presents, you’ve probably watched a bit of TV, sitting on the TV, I don’t get why you can’t hug someone.

“Surely the chances of transferring anything, virus-wise, has already happened because you’ve been together for five hours. Why would a hug be such a big issue?”

Dr Amir replied: “You’re absolutely right. What’s important to know is that opening up for Christmas for five days in households is not necessarily a scientific decision, it’s more of a political decision.

“And so trying to balance it out with the science isn’t going to work. You’re right – people in households are going to be breathing the same air as other people within that area. So it’s a tricky balance – there is no a scientific basis to it. It’s more about human behaviour and social decision making.”