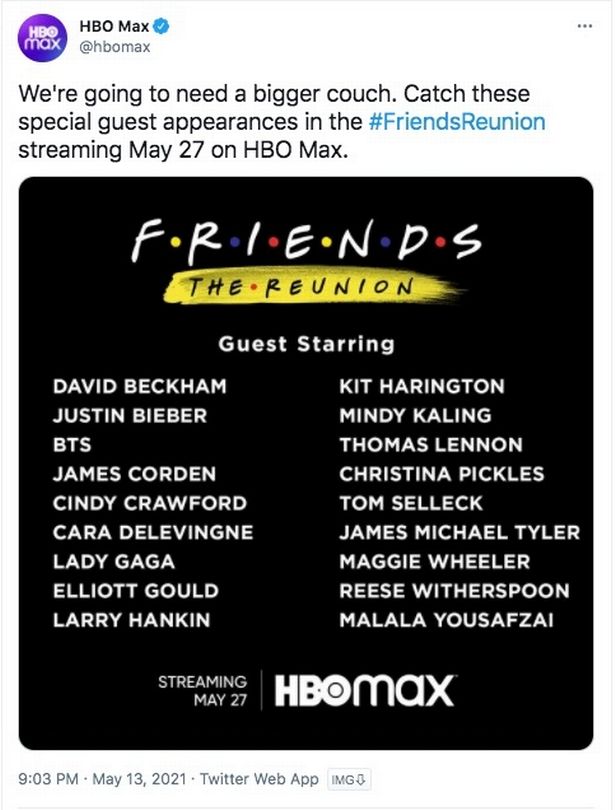 The reunion we’ve all been waiting for is edging ever closer and new details have emerged on just who will be appearing on the special.

Shortly after fans of Friends were sent into a frenzy thanks to a brand new teaser for the upcoming reunion special, a list of special guests was unveiled.

In the trailer,Rachel Green (Jennifer Aniston), Monica Geller (Courteney Cox), Phoebe Buffay (Lisa Kudrow), Joey Tribbiani (Matt Le Blanc), Chandler Bing (Matthew Perry), and Ross Geller (David Schwimmer), can be seen walking side by side from behind in a dimly lit street, with a piano version of the theme tune playing.

“Text then reads: “The one where they get back together”.

And now fans have discovered just who will make a special appearance alongside everybody’s favourite group of friends when the show premieres on May 27 on HBO Max.

And the eagerly awaited special reunion was reportedly finally filmed in April over three days, with a live audience participating in the reunion.

Little is known about what fans can expect, but portions were said to have been filmed inside the original Friends stage.