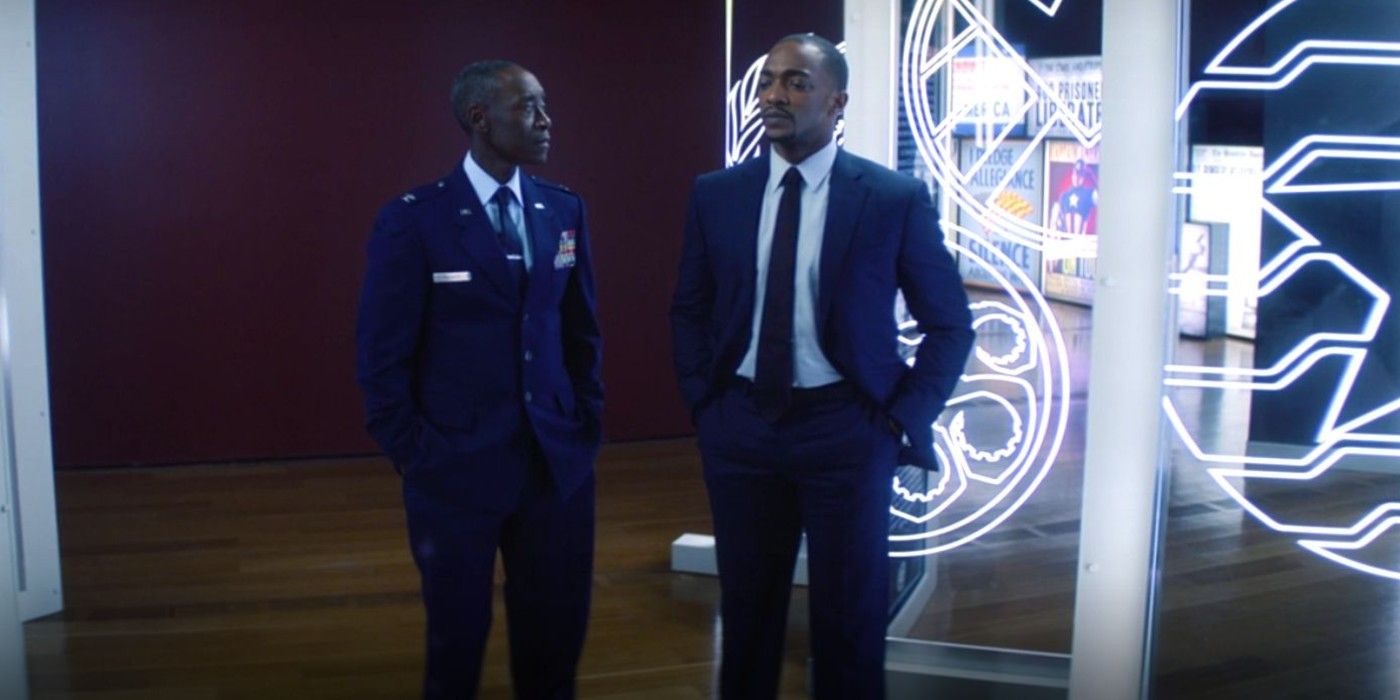 The Falcon and the Winter Soldier star Anthony Mackie reveals he often gets mistaken for Don Cheadle. Prior to joining the MCU, Mackie was best known for his roles in 8 Mile and The Hurt Locker. In 2014, he stepped into the role of Sam Wilson, aka Falcon, for Captain America: The Winter Soldier, playing a vital role in Steve Rogers’ (Chris Evans) second solo adventure. Since then, he’s appeared in five additional MCU movies, with the most recent being Avengers: Endgame. Mackie has long been a supporting character in the franchise, but with Disney+’s The Falcon and the Winter Soldier, he has finally stepped into the spotlight.

The Falcon and the Winter Soldier finds Sam settling back into the world after reappearing alongside the rest of those who were killed in Thanos’ Avengers: Infinity War snap. Endgame‘s final moments had Steve pass the Captain America shield onto Sam, but Sam isn’t quite sure can take on the mantle. As a result, The Falcon and the Winter Soldier has so far seen Sam grappling with what it means to be Cap, even as the US government promotes their pick for the job, John Walker (Wyatt Russell).

During a recent interview with BBC Radio 1’s Ali Plumb, Mackie was asked what fans often say when they recognize him in public. Interestingly, they don’t say anything about Mackie’s own career – they tend to think he’s fellow MCU star Don Cheadle. “They literally go: ‘Hey man! I love you as Black Iron Man!’ I’m like ‘Uhhhh,’” Mackie said with a laugh. “Or they’ll say, ‘Aren’t you the guy in Iron Man?’ I’m like, ‘Uhhh…’ Literally, once a day, someone comes up to me and asks if I’m Don Cheadle.” Cheadle chimed in on social media and wrote, “likewise, papa …“

Cheadle’s James “Rhodey” Rhodes has been a part of the MCU since Iron Man 2, with Cheadle having taken over the role from Terrence Howard. His most recent MCU appearance actually arrived in The Falcon and the Winter Soldier‘s premiere, as Rhodey and Sam discussed why the latter returned the Captain America shield. It was a small moment overall, but one that expanded the relationship between the two characters in a meaningful way. Cheadle is getting his own Disney+ show with Armor Wars, which is expected to begin production in the coming months.

Prior to The Falcon and the Winter Soldier, Mackie was often kept to the sidelines of the MCU, acting as a major supporting player for Captain America. This series has given him the opportunity to fully dig into his character and show audiences a new side to him. Even just two episodes in, Mackie has wowed fans with his ability to straddle the line between comedy and drama. Hopefully, The Falcon and the Winter Soldier will help fans see the difference between Mackie and Cheadle going forward; after all, both of them deserve to be recognized as their own selves.

The Falcon and the Winter Soldier continues Friday on Disney+.