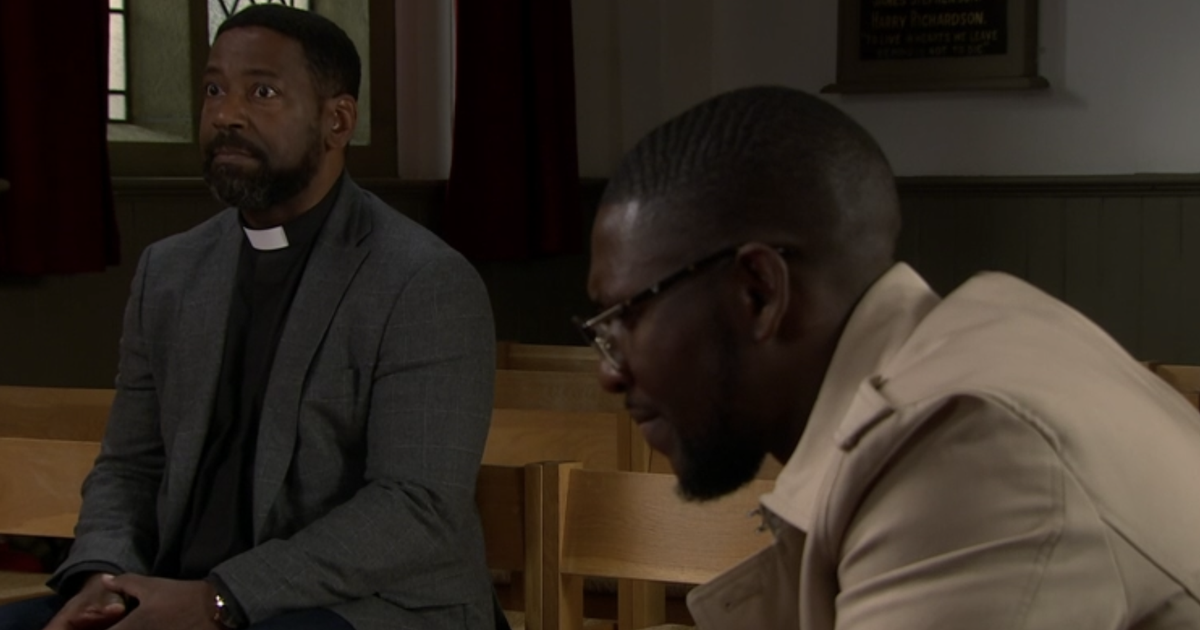 On Emmerdale, Ethan (Emile John) confronted Charles (Kevin Mathurin) about what happened to his mother Esme – and what he discovers leaves him heartbroken.

Ethan Anderson finally got some answers regarding his Charles’s behaviour on Emmerdale tonight – though it’s left him devastated.

On tonight’s episode, Ethan (Emile John) confronted Charles (Kevin Mathurin), wanting answers about his mother, Esme, who has been sending them a string of strange text messages.

After abandoning Ethan as a child, Esme has remained out of his life, but has decided now is the time to reach out and get back in touch.

Meeting up with Charles yesterday, Esme gave him a letter for Ethan, and revealed that she had secretly given birth to a daughter.

Initially intending to hide things from Ethan, Charles eventually had to come clean when the letter was found.

Eager to understand why she would suddenly touch base, and why she left in the first place, Ethan cornered Charles with a barrage of questions.

But he should be careful what he wished for after hearing what Charles had to say – and the answers he received could scar them all for years to come.

Turns out that Esme suffered post-natal depression after giving birth to Ethan, but didn’t ask anyone for help.

Feeling pushed away by Esme, Charles ended up having an affair.

Devastated by the betrayal, Esme eventually left the family unit completely – and after letting her son down by not turning up to an arranged visit, was told never to return to them.

Ethan was left fuming by what he’d heard, revealing that he had blamed himself for years for her running away from their family.

“That wasn’t your decision to make,” he said after his father argued he was just trying to do what was best.

“You were trying to punish her. No wonder you never wanted to talk about her.

“The amount of hours I spent wondering what I’d done – why she hated me so much.

“I always wondered if it was my fault. All these years you’ve been lying to me. I’ll never forgive you for this.”

Will they be able to bury the hatchet or find something to put them on the same team once again?