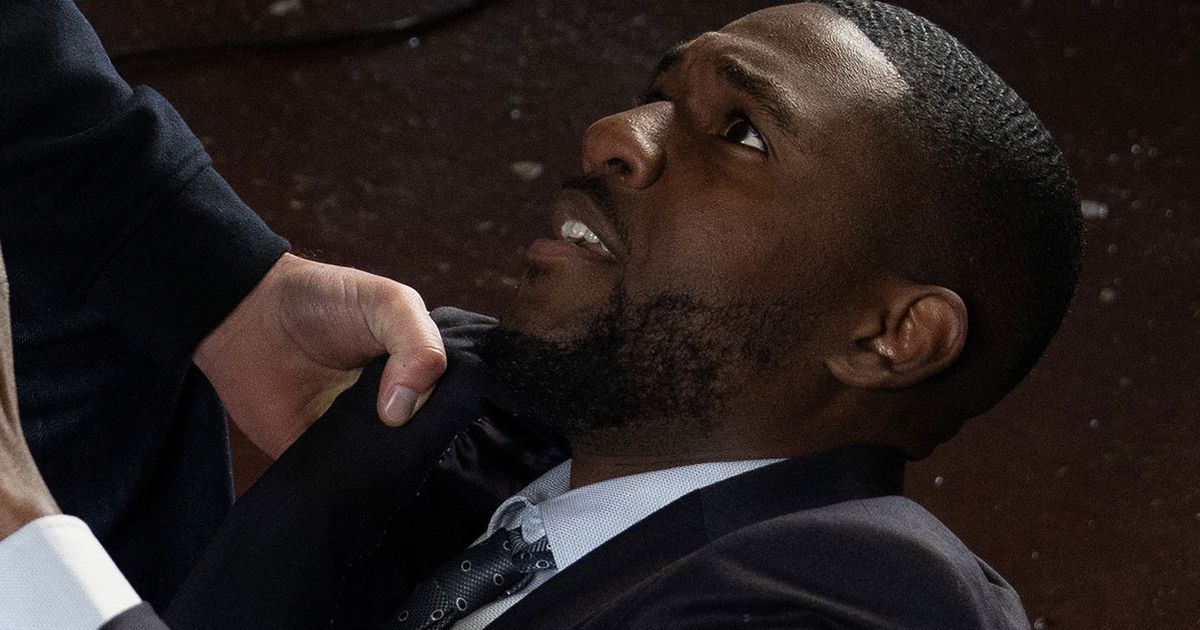 Emmerdale aired violent scenes on the ITV soap on Thursday night, as racist thug Jordan attacked Ethan Anderson and left him in a bad way

Emmerdale fans were glad to see the back of newcomer Jordan on Thursday night, as the racist thug was arrested after a second attack.

This time, his victim was his former solicitor Ethan Anderson who had just dropped his case over his racist behaviour.

Ethan was defending Jordan in the case against him, after he was arrested for assaulting Billy Fletcher in an unprovoked attack.

Jordan denied Billy’s claims it was racially motivated, before his racist views soon emerged as he once again tormented Billy this week.

Ethan decided he could no longer carry on with the case, despite fearing it might threaten his legal career – and Jordan turned nasty.

Emmerdale fans were glad to see the back of newcomer Jordan on Thursday night, as the racist thug was arrested
(

In the latest episode, Ethan confronted Jordan about his behaviour, and it wasn’t long before the vile character was making more racial slurs.

Things escalated when a shaken Ethan left his office and was heading to meet his boyfriend Marcus Dean, when he was followed by his former client.

Jordan began taunting him and grew aggressive as he questioned his decision to walk away from the case.

He pushed him to the ground and began violently beating him, before leaving him barely conscious

Ethan could not take his vile comments any longer and told him exactly what he was, which then put him in danger as Jordan once again used violence.

He pushed him to the ground and began violently beating him, before leaving him barely conscious and bleeding on the floor.

Luckily, Billy managed to track them down, with Marcus’ help, and came to Ethan’s rescue – as Jordan tried to force him to retract his earlier police statement.

Billy agreed to as long as he could get Ethan the help he needed and for Jordan to back off, but this was not actually the case.

Billy managed to track them down, with Marcus’ help, and came to Ethan’s rescue
(

What Billy soon revealed was that he’d in fact called the police already before Jordan saw him, and they soon swarmed in to arrest the thug.

Marcus rushed to the location Ethan had told him he was at and found him being treated by paramedics as Jordan was escorted away.

So will justice finally be served and will Ethan be okay?

Emmerdale airs weeknights at 7pm on ITV, with an hour-long episode on Thursdays.