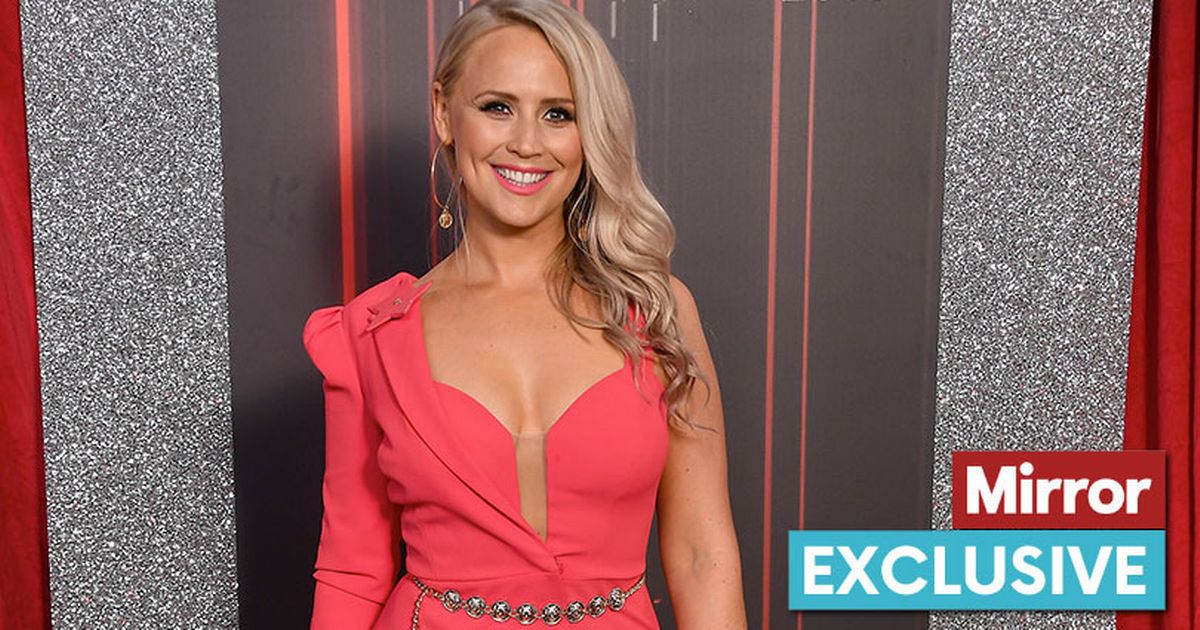 But this week, they will see her diagnosed with postnatal depression – and get the support she desperately needs.

Tuesday’s poignant scenes, which show Tracy receiving help from a crisis team after running away from her baby daughter Frankie and breaking down, are set to leave viewers in tears.

And for actress Amy Walsh there’s a huge sense of relief too – that she’s given a voice to the one in ten women in Britain who are also suffering with the condition.

“I got goosebumps when I first heard about the storyline,” Amy, 34, admits.

“I felt real excitement to be given something of such responsibility and to be challenged. Then I felt an overwhelming fear and pressure on myself to get it right. I haven’t had children – was this something I would find hard to relate to?

This week Tracy will be diagnosed with postnatal depression

“But the writing has been amazing and really helped with that journey for me.

“The influx of messages I’ve had on social media has been overwhelming. Pretty much all of them have been from women who have been through postnatal depression.

“Seeing Tracy’s journey has validated what they went through. One told me she had gone through it with all of her children.

“Another said, ‘I wished I’d watched Tracy’s story on the telly ten years ago when I was going through it’. That really means a lot.

“It’s important that Tracy’s is a story of hope.

For months Emmerdale fans have watched the new mum struggle
(

“All of the messages I’ve had have ended in, ‘…but I’m OK now’. That was fundamental.

“There needed to be that sense that you can get through this because it is something that the majority of women do get over.

“It’s the hardest I’ve worked – probably the whole time I’ve been here – but the most job satisfaction I’ve ever had.”

As part of her research, Amy – who has played Tracy in the ITV soap for seven years – spoke to two women about their experiences of postnatal depression, via a support charity called Association for Post Natal Illness.

One of them – Nicola Sinclair, 43 – was diagnosed with postnatal depression more than a year after the birth of her first daughter Maddie, who is now 14.

The situation was so challenging that the former sales manager, who has since retrained as a psychotherapist, even separated from her husband Ian, 43, for four years.

Nicola, who got back together with Ian, now volunteers to help other women with postnatal depression.

The mum-of-two from Coventry said: “There were so many signs, which I just put down to being a new mum.

“Ian and I were married five months after Maddie’s birth. I remember sitting down at the kitchen table with a pile of invites, trying to stuff them into envelopes and crying, thinking, ‘This is ridiculous. Why can’t I get a grip?’

“It never got to the point of me wanting to kill myself, but I used to fantasise about being in a car crash so I could go to hospital and just be looked after.

“That’s why Emmerdale’s storyline is so important. There are lots of women out there who can’t put into words how they are feeling. I hope they’ll reach out if they do feel that way.”

Amy says that talking to women like Nicola made her feel “a bit unworthy” but she was moved by their honesty and how open they were.

“It made me think, for the first time, that this could happen to anyone,” she says.

“You assume strong people can be fine, but this woman had to step away from her relationship because she couldn’t fix herself when she was trying to fix them.

“That’s what we’ve been seeing with Tracy and her partner Nate. She’s pushing him away and he doesn’t understand why.”

Amy also immersed herself in women’s blogs and news stories and told how some of the more harrowing cases of postnatal depression left her in tears.

“There was one particular blog where I just really related to the woman’s sense of brokenness in that moment,” she reveals.

Amy was also more than happy to get some feedback from her EastEnders actor boyfriend, Toby-Alexander Smith, 31.

“I’ve enjoyed my job even more since meeting him,”

Amy admits. “We run our lines past each other and he’s kind of made me better at my craft. We rub off on each other.

“It’s also just really nice to have someone to discuss things with at the end of the day.”

The pair have been dating for a while and Amy splits her time between seeing Toby in London and filming in Leeds.

Toby knows just what it’s like to tell a story with as much integrity as possible. His Albert Square character, Gray Atkins, is a domestic abuser who killed his wife. The storyline spurred him on to become a Women’s Aid ambassador.

Amy says: “There are moments when I’ve said to him, ‘I really don’t know how to play this’. And we’ll discuss it and I’ll get there.”

She has also had huge encouragement from her famous sisters – Sally, who played Lyn Hutchinson in Emmerdale, and Girls Aloud star Kimberley.

When Amy wore a fake bump to play pregnant Tracy last year, her siblings were going through their own real pregnancies.

Amy says: “Sally messaged saying she was impressed by how detailed Tracy’s story was – that it’s not drama for drama’s sake.

“And Kimberley, bless her, always catches up and also said it is well done.”

“I am never away from Nate,” Amy says of her new nephew.

“He’s delicious. I am getting lots of snuggles in. He’s a lovely, chilled baby and they are doing really well.

“The kids watch it [Emmerdale] with her sometimes when they’ve just got out of the bath.

“Cole said to me, ‘I saw you on telly having a baby. You are a really good actress!’ I’ll take that,” she laughs.

While Amy enjoys playing a new mum on screen, babies with Toby aren’t quite on the agenda yet.

“I’ve always wanted kids, as and when that happens,” she says.

“But what it has done is broaden my mind to motherhood in general, but especially mental health awareness.

“I definitely think there needs to be more conversation around mental health before women become parents, and after.

“If Tracy’s storyline can open up debate – if someone can be watching and relate to her and reach out for help – then that is a great thing.”

■ Association for Post Natal Illness offers help and advice to anybody affected by postnatal illness. They also have a network of volunteers who can offer support. Get in contact via their helpline on 020 7386 0868 (Mon-Fri, 10am to 2pm) or email them at [email protected]