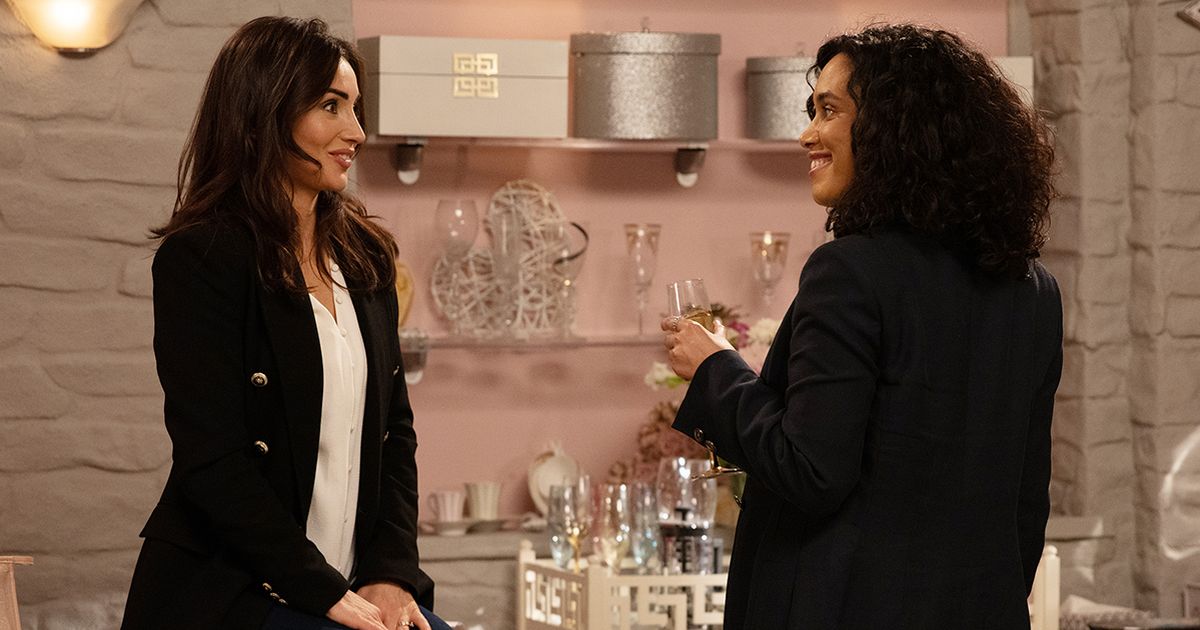 Emmerdale spoilers have revealed Leyla Harding’s secret will be exposed on the ITV soap next week, as Vanessa Woodfield comes close to working it out

Emmerdale fans will finally find out what Leyla Harding has been hiding on the ITV soap, with her secret exposed next week.

Spoilers now released actually confirm all about it and her true link to newcomer Suzy Merton for those fans who can’t wait until transmission.

It’s confirmed Leyla is secretly taking drugs, as is Suzy, with the resident living a whole different life away from the village and her husband.

Viewers had speculated all sorts after Leyla began acting out of character and making cryptic phone calls, before she was stunned to see Suzy in the village.

Leyla warned Suzy away and told her not to continue seeing Vanessa Woodfield, fearing her lies would be exposed to those in the village.

Fans began speculating the pair could have had a past romance or that they might be related, as others questioned if the pair were actually con artists working together.

Now, spoilers for next week reveal Leyla’s drug habit will be exposed as she goes into business with Suzy.

Despite not being keen to have Suzy around, the pair are soon thrilled when their meeting with a rich client goes really well.

After securing his business as a client for their events and wedding planning companies, the pair meet up in secret and all is revealed as the two women prepare to take drugs.

Emmerdale spoilers have revealed Leyla Harding’s secret will be exposed on the ITV soap next week, as Vanessa Woodfield comes close to working it out
(

Suzy holds up a bag of white powder which is revealed to be cocaine, and Leyla eagerly grabs it to take some behind The HOP.

Leyla and Suzy soon celebrate the deal with Eddie, before heading back to the office.

With Leyla on a coke-fuelled roll, her and Suzy are at risk of being caught out as Vanessa walks in unannounced – with drugs visibly on the desk.

But will Vanessa rumble the truth, and how will Leyla’s loved ones react to her secret?

Speaking to The Mirror and other press, she teased of what was ahead in 2022: “Leyla’s got a huge story coming up where a shocking secret is revealed and this will have huge ramifications for Liam and Jacob, in particular.”

Bosses had recently hinted there was something Leyla was hiding after a difficult year for the character and her family.

Leyla and Liam have been grieving the loss of Liam’s daughter Leanna, Jacob’s girlfriend, who was murdered by killer Meena Jutla last July.

Since then the couple have also lost a baby as Leyla sadly suffered a miscarriage, and more recently Leyla was shot by Meena but has since recovered.

Hinting Leyla was not doing well, soap producer Laura told press earlier this year: “Leyla has a big storyline coming up in 2022. We’ve seen her be a huge support to Liam through the loss of his daughter Leanna but is all as it seems?

“Is Leyla really coping as well as she seems to on the surface or is there a bit more going on there that we’ll uncover?”

Meanwhile, fellow producer Kate Brooks said of the plot : “There’s a massive story on the table for Liam and Leyla which is the result of what has gone down with Leanna and everything.”