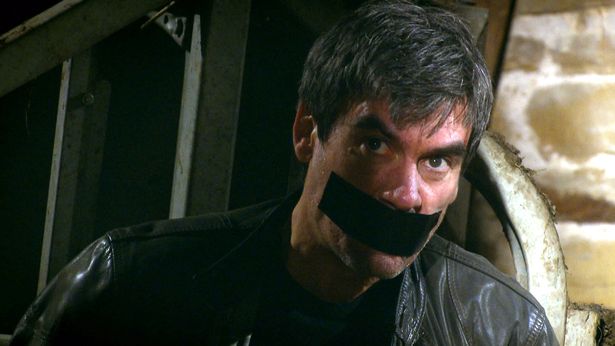 Emmerdale has revealed it will air a shock kidnap plot next week as Cain Dingle (Jeff Hordley) is bound and gagged and held to ransom.

His ex wife Moira Dingle (Natalie J Robb) is given a ransom note as a mystery assailant tells her if she does not pay up, she will never see him again.

The harrowing scenes come as viewers recently noted the sexual chemistry between the estranged couple as Cain has vowed to avenge Moira after the hit and run.

New pictures show Cain bound and gagged in a barn, looking at his captor, apparently powerless to stop them.

Meanwhile, fans of the soap were left sickened to the core watching Wednesday’s harrowing episode as Paul brutally beat his son Vinny.

The horror scenes aired after Vinny confronted Paul about his relapse in his gambling habit.

But he viciously attacked Vinny, just months after returning to his life after abandoning him as a child and getting back together with his mum, Mandy Dingle.