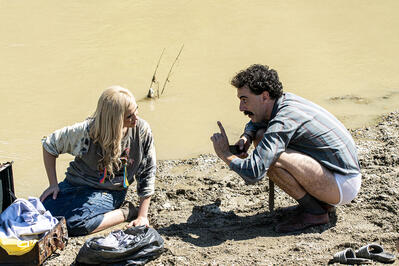 I’ve watched Borat Subsequent Moviefilm once and will probably watch it again, and I still can’t believe it exists. The sequel to Sacha Baron Cohen’s outrageous 2006 satire Borat was made in spite of the fame of the character and its creator, the pandemic, 15 years of cultural and political change, and legal challenges, including potentially one from a certain Nosferatu-faced attorney for President Trump who’s featured in the movie and comes off even worse than he usually does. This Borat‘s success as a movie is almost secondary to the fact that it got made at all. But, happily, it is mostly successful on its own terms as a piece of anti-Trump comedy.

As a movie, Borat 2 — which has a number of different subtitles, most prominently Delivery of Prodigious Bribe to American Regime for Make Benefit Once Glorious Nation of Kazakhstan — can’t be separated from the circumstances of its creation, at least not yet, because the circumstances are so extreme. Filming began in late 2019, and much of the movie seems to have been shot early this year, including a scene filmed at the CPAC conference in February where Baron Cohen interrupts a speech by Mike Pence while in character as Borat dressed as Donald Trump, an event that made the news at the time, but it wasn’t clear then that it was Baron Cohen back to his old tricks. (The most shocking thing about the scene from an October 2020 perspective is hearing Pence say that the coronavirus isn’t really a threat to America, but even if it becomes one, “we’re ready for anything.”)

Then, the production was reportedly the first to return to work as lockdown started to end, and they filmed throughout the summer and rushed to get the movie ready for release before Election Day, as Baron Cohen seems to believe Borat will help get out the vote. It was kept almost entirely secret throughout its production. And now, just a few weeks after the existence of the movie was confirmed, Borat Subsequent Moviefilm comes out on Amazon Prime Video this Friday.

All that preamble about how the movie came to be is necessary backstory for contextualizing and understanding it. The movie is touch-and-go at points, but it’s miraculous that it doesn’t feel even more chaotic than it does. The twist ending Baron Cohen and his team of writers and producers came up with in response to the coronavirus pandemic has to be better than whatever they originally had planned.

The plot starts with Kazakh journalist Borat Sagdiyev (Baron Cohen) in a gulag, where he was sent after embarrassing Kazakhstan on the world stage with his first movie 14 years before. But the Premier of Kazakhstan, an aspiring strongman leader, wants to curry favor with President Trump, so he summons Borat and assigns him to travel back to America and give Trump a gift, a famous primate government official/porn star named Johnny the Monkey. But since Borat can’t get close to Trump — he got in trouble for pooping in front of Trump Tower on his last trip — he has to give the gift to someone else in Trump’s inner circle, Vice President Mike Pence, “America’s most famous ladies’ man.” Upon arriving in America, Borat discovers that his teenage daughter Tutar (Maria Bakalova) has stowed away in Johnny’s crate. If Borat doesn’t come up with a new gift, he will be executed on his return to Kazakhstan, but then he sees a news report about Trump’s connections to deceased sex trafficker Jeffrey Epstein and his attraction to very young women, and realizes that he has something Trump or someone close to him (like his personal attorney) will like even better than a famous monkey: a teenage girl. So Borat and Tutar go on a cross-country odyssey to make Tutar appealing to American men and deliver her to her new “husband.”

That odyssey mostly involves the classic Baron Cohen character strategy of saying outrageously racist/sexist/antisemitic/you-name-it offensive stuff and observing how seemingly average Americans react — or don’t react. Of course, more than a decade after the first Borat, two years after the show Who Is America?, Baron Cohen’s return to pranks, and more than five years into the Trump Era that began when Trump descended in his gold elevator and called Mexican people rapists while announcing his candidacy, it’s mostly not shocking or surprising to hear people being openly bigoted. It’s just depressing. And some people even come off as being polite to these strange people saying things that maybe aren’t outrageous “in their country.” Mostly. It’s still pretty shocking to see a cheerful cake decorator write “Jews will not replace us” on a chocolate cake without batting an eye.

Baron Cohen slips back into the smelly Borat suit like he never took it off, which is to be expected. No one is better at this kind of deep character-based satirical pranking than him. But the real surprise and breakout star of the film is Maria Bakalova, who plays Borat’s sweet daughter Tutar, a character so oppressed by a patriarchal society that her most fantastical dream is to live in a “golden cage” like Melania Trump. Bakalova is a little-known Bulgarian actress with few credits performing in her first American production, and she demonstrates extraordinary courage in addition to serious comedic chops. She does everything Baron Cohen does, she’s doing it without the safety net of being a rich and famous man who’s been pranking powerful people for 20 years, and she’s the emotional core of the movie. You’ll find yourself emotionally invested in Tutar’s journey of self-discovery and self-actualization, and it’s due to the sincerity of Bakalova’s performance.

Borat Subsequent Moviefilm is not as funny as the original Borat, but it couldn’t be. The original Borat is one of the funniest movies ever made, a lightning-in-a-bottle moment that can’t be replicated. And it won’t have the cultural impact that the original Borat did, because it’s being released direct to Amazon Prime (notably not Netflix) in the midst of the most chaotic year in recent memory. Nothing has much cultural impact anymore because nothing can compete with the news, and there’s so much content constantly being released that almost everything feels ephemeral. But that’s not Sacha Baron Cohen’s fault. Sacha Baron Cohen made the best Borat sequel he could have under 2020’s circumstances.

Borat Subsequent Moviefilm will be released on Amazon Prime Video on Friday, Oct. 23.