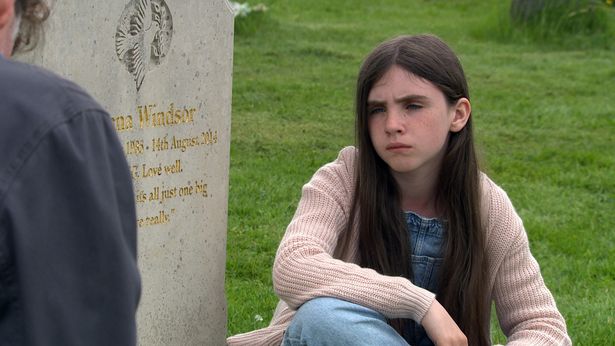 Emmerdale’s April Windsor has been at the centre of some horrifying trolling online, with her targeted on her social media.

Her ordeal is set to get worse in the coming episodes, as she’s bullied over the death of her late mother Donna.

Cathy Hope was seen talking with the youngster about something she didn’t want anyone else to know about, with Cathy’s dad Bob, April’s grandfather, asking what was going on.

But Cathy was quick to comment that April had posted a lovely video online in tribute to Leanna Cavanagh, who died recently.

April sadly knows all about grief, following mum Donna’s tragic death in 2014 when she was just five years old.

Referencing the death of his own mother Viv, Donna’s mum, the teen said she was too young to even remember her mother anyway.

As Cathy stepped in to defend her, Heath said April wanted people to feel sorry for her for losing her mum.

He also called her a saddo and said she had no mates, calling her desperate and saying no one cared before he stormed off.

Many viewers decided that this was enough proof to suggest Heath was bullying April, and was behind the existing and upcoming taunts online.

But others suggested it was actually Cathy, and she was pretending to support April to cover her tracks.

One fan wrote: “Cathy is so jealous of the attention that April is getting through her online page – obvious she’s the bully.”

Another said: “April still getting bullied think it’s by Cathy or her brother.”

A third added: “I think Cathy is the troll.”