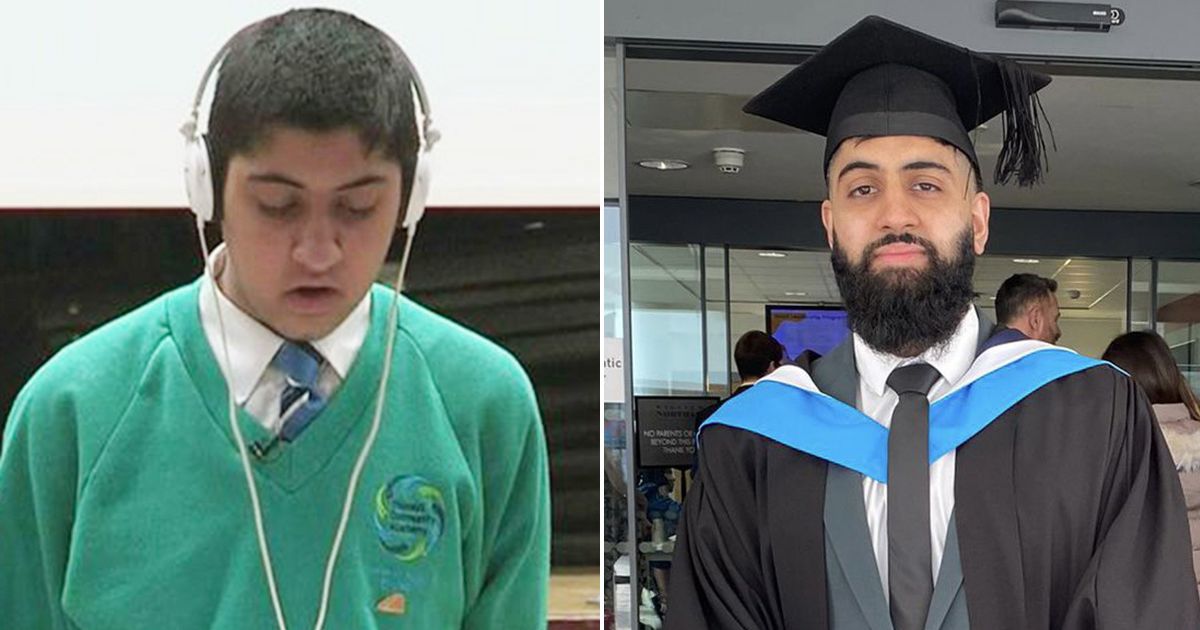 Back in 2013, Musharaf Asghar and his teacher Mr Burton inspired Britain when they worked together to overcome the teenage’s stammer on Channel 4’s Educating Yorkshire.

After watching The King’s Speech, Mr Burton asked his struggling pupil to try a technique used in the film and it worked, bringing viewers to tears.

The trick helped Mushy get through his English GCSE oral exam and saw him deliver a first end of term speech in school assembly.

And now, nine years later, Musharaf, known as Mushy, has graduated from university as he continues to inspire with his hard work and dedication to learning.

To celebrate the special day he shared a photo and inspirational message on Twitter, paying tribute to the amazing teachers who helped him get there.

Musharaf Asghar has graduated from university
(

He wrote: “From sitting in the classroom and contemplating if life would ever accept me for having a stammer, to going to university and graduating.

“I can’t sum up in words how proud I am and how much my teachers’ changed my life. You can truly achieve anything you put your mind to!”

Since the age of five, Mushy’s ability to speak has been completely hijacked by his severe stammer, which started after he suffered a bad asthma attack.

Speaking to The Mirror back in 2016 he said: “I remember fainting and being taken to hospital.

“Doctors said the stammer could be psychological. I think it could be the shock of the attack.”

Young Mushy was distraught when the words would no longer come. “I remember crying, my mum trying to help me calm down,” he says.

At home his parents – his dad is a taxi driver who owns a restaurant – and four siblings were patient, but at school he entered a long tunnel of isolation.

“I had a hard time,” he shrugs. “It was difficult to make friends. Kids didn’t want to hang around long enough to hear me speak.

To ward off bullies, he tried humour. “I tried to be the class clown, I took the Mickey out of myself,” he says.

“But the bullies still targeted him. “I got used to people mimicking me,” he says.

“Kids called me the DJ – they said ‘You wouldn’t need any equipment’.

Educating Yorkshire, he says, lighting up, changed his life.

“I can’t thank them enough, giving a boy like me a chance,” he says, speaking clearly. Passion seems to make him more eloquent.

“I felt freedom when I stood there speaking, I’d always been trying to speak up, to ask questions, get my opinions out, and in that assembly hall I was able to show people who I actually was.”

After school, Mushy went to college to study a BTec in science, and completed a course to further help his stammer.

But although his speech improved, girls remained a no go and he’s been on First Dates to try and find love – with Mr Burton there to offer some support.

Mr Burton was there to offer him some last minute advice

“As soon as I sat at the bar I suddenly realised where I was!” laughs Mushy.

“And how on earth was I going to deal with it? I was so nervous.

“And having Mr Burton there was a bit awkward. I’d have rather been anywhere else.”

Salina takes meeting her date with his former teacher admirably. She is pretty nervous herself.

“I’m really awkward and shy, this is a big step,” she says.

And thankfully, she is beautifully empathetic to Mushy, who falls into cavernous silences as he fights to curb his stammer.

Mushy says: “When Salina arrived I really liked her, I thought she was attractive, and so it was hard to speak up.

“But I could see it was hard for her to open up, and so I was trying hard to make sure she felt OK.

“It was odd sitting there with the cameras, but she was really good at making eye contact, which I know is hard for people.

“She was very patient. And so we got on well and in the end we were the last ones in the restaurant.”

Do you have an inspiring story to share? Email [email protected]

‘I refuse to use my grandson’s awful, pretentious name – I call him ‘the baby’ instead’