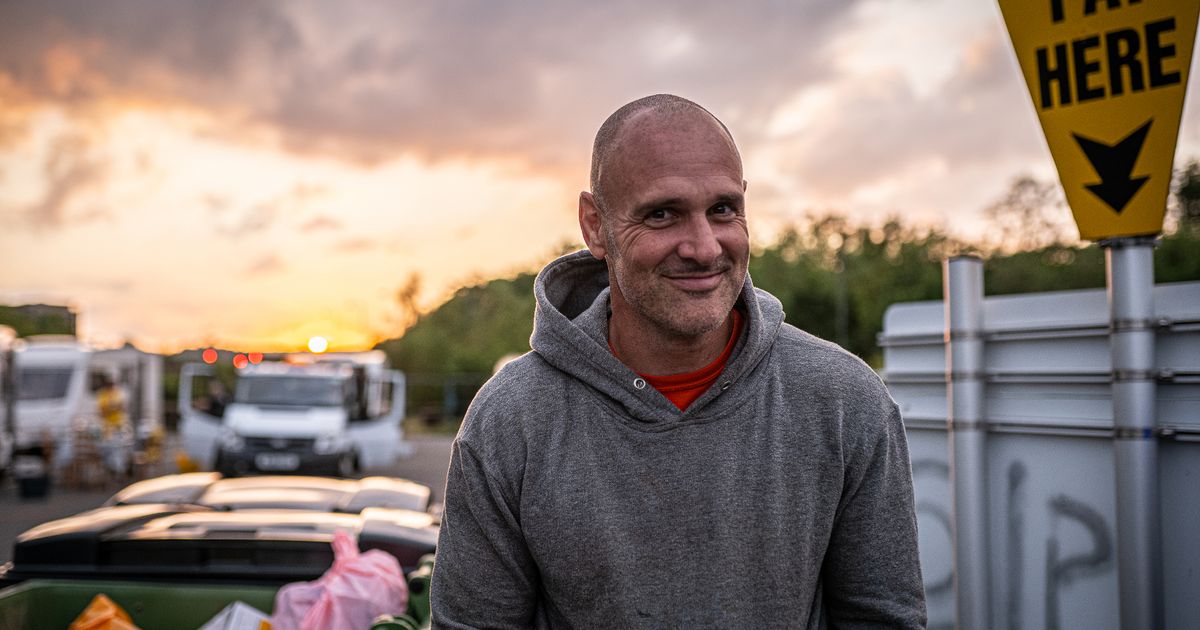 Explorer Ed Stafford is used to hostile environments, but as he braced to approach a gypsy camp that had illegally pitched up on a Sussex A-road, he felt intimidated.

“This is mental,” said Ed, taking in the rowdy site teeming with dogs and chickens and an atmosphere thick with tension.

He was immediately threatened: “Come around my family, I’ll smash the camera, mate.”

The former Army Captain has spent 60 days living on the streets for a documentary, walked the length of the Amazon and faced dozens of brutal survival challenges – but entering the gypsy community for his latest C4 doc was one of the scariest experiences he’s ever had.

He says: “When I think about gypsies there is an element of fear. Rightly or wrongly, gypsies are linked with crime, going outside of the law and it is daunting going into that world.”

Ed was fearful as he prepared to spend 60 days on the road in a caravan, living on the fringes of society. There were some confronting moments – someone defecated on his windscreen, kids showed off knuckle dusters and used catapults to kill squirrels for dinner.

But the 46-year-old had his preconceptions smashed during filming, discovering an ancient culture, with multi-generational families living in the great outdoors and simply struggling to survive against an unwelcoming society.

Ed, who is adopted, was also shocked to discover that he even has gyspy heritage.

At the Appleby Horse Fair in Cumbria, the biggest event in the gypsy calendar, one of the women Ed meets, Sherrie, decides to Google him, discovering that his birth name, Lovell, is a common gypsy name. “Welcome to the family!” she declares, leaving Ed stunned.

The dad-of-three, who lives in Leicestershire with explorer wife Laura Bingham, says: “She just had an instinct that I was a gypsy. I was really interested because I had felt quite a connection to the community.

“Suddenly, when I recognised that there was a possibility that I did have ancestral gypsy blood, I decided that it was a good thing to look into. The production team found an ancestry gypsy lady to dig into my history and find out where there was any truth in this.

“She came in and quite theatrically gave me my family tree, revealing that my four-times great grandfather Anthony Lovell and his wife Jane Light, who married in 1833, were both from Romani gypsy families. “The moment I found out it made me smile, it gave me almost a sense of pride. I am adopted and that was a little door that was unlocked in terms of unlocking my past.

“It also answered questions. I didn’t necessarily fit in with my upbringing in Leicestershire and going to boarding school – I got into all sorts of trouble and I ended up channeling that energy into something inherently quite nomadic, walking along the Amazon and doing expeditions.”

In 60 Days With The Gypsies, Ed spends time with Romani gypsies and Irish travellers across the UK, discovering an uncompromising world steeped in tradition and a community viewed with mistrust.

Toughening laws mean they could face instant evictions, loss of property, fines of up to £2,500 or even three months in prison if they stop in the wrong place, but common land is fast disappearing and space on permanent sites are like gold dust.

Ed says: “I was naive. All I knew about gypsies was negative or hearsay. Like a lot of people, I had prejudices, but it is so difficult to live as a nomadic person in the UK.”

Ed admits that he did encounter some of the stereotypes, with some groups blaring dance music until late, leaving litter, and kids tearing around on noisy motorbikes.

“They bring a lot on themselves, they don’t always play by the rules,” says Ed, “But society doesn’t make it easy to do that.”

He meets one family of Irish travellers who are getting a bit of a bad reputation for anti-social behaviour, having set up camp in a Newquay town centre car park for a summer by the beach.

Police threaten that bailiffs are coming, but dad-of-five David knows that currently they need a court order. “We want to be treated fairly,” he says.

His eleven-year-old John Francis, who has already left school and is training as a boxer, says of the authorities: “F*** ‘em,” as he shows off his knuckle dusters.

But Ed says: “Sometimes what you see is anti-social behaviour, but if you corner a dog eventually it’s going to bite you. They travel in large numbers, not to be intimidating but for safety in numbers so they don’t get targeted. They fear being persecuted.

Ed was initially fearful about the experiment
(

“John Francis is a good kid, he’s got a twinkle in his eye. He’s got charisma. I was shocked initially about him being taken out of school at 11, I wouldn’t do that, but my son is being brought up in a very different world.

“John Francis needs to have a different set of skills to fend for himself. The streetwise-ness, the savviness, the ability to gain work – they all become far more relevant.

“There’s a real positive to the way kids like him are living. They’re outdoors all the time.”

In Manchester, Ed meets a group of gypsy lads who were using catapults to kill squirrels and pigeons for dinner. “Put a load of seasoning on them!” explains one kid, while Ed hangs off a tree to break a branch for firewood.

Ed says: “We may think it’s slightly naughty behaviour, but they were absolutely crack shots. It appears a bit rough and ready, but it’s quite wholesome as well.

The star met people from all different walks of life
(

“To be able to step out of the caravan, you’ve got your cousins, your auntie, your grandma. To have multi generational families living essentially outdoors, there’s a huge amount to be said for it. They also don’t lean on outsourcing other people for support, they support each other. There are a few answers in this nomadic way of life. There is a sense of community.”

Ed also heard terrifying stories of abuse. “Farmers run us over with tractors, spray us with s***,” said one dad. “Somebody tried to rip a window off a caravan and tried to stab one of our friends. He wanted to chuck a kettle bomb in while the kids were inside.”

At one camp, Ed had a taste of what can happen when a community is marginalised, discovering his van had been vandalised.

He says: “There is confrontation and there are people out there who are prepared to do nasty things. Who wants to have human faeces sliding down the f***ing windscreen? It angered me at the time.

“I genuinely don’t know who did it, it could have come from within the community or outside. I didn’t point fingers, it’s just not a nice thing to happen.”

Ed admits he struggled to understand why anyone would choose such a hard life, often living hand to mouth with no electricity or water – but he discovered a deep-rooted culture that abhors the restrictions of houses.

Single mum Cheyenne, 22, sobbed as she told Ed she just wants permission to stay on a permanent gypsy site in Kent with electricity and water for her three-year-old son Josh Thomas and eight-month-old baby girl Indiana. “I’m not a priority,” she says, “But it’s not my culture to live in a house. I couldn’t live in four walls, it would crack me up.”

Kent County Council told C4 they couldn’t comment on individual cases, but Cheyenne, who has to drag a heavy churn of water 100m every day and power up her generator for electricity, is constantly anxious that she’ll be evicted at any moment.

Cheyenne says: “Am I going to have a stable home for my babies? If they won’t give me the pitch then what am I supposed to do?”

Meanwhile, eighty-year-old Anna is forced to live on the side of the road by a busy railway track in Matlock, Derbyshire. She and her family have no electricity or water and no permanent site.

Anna, whose carers visit daily, bringing their own jerrycans of water, insists: “I’ve never lived in a house my whole life and I’m never going in one. I just want to be at a site with water and electricity.”

Fifty-year-old John Doe, who sells scrap metal to make a living and forages for firewood and food, spends much of the year on a strip of land by a roundabout in Dorset. He is constantly moved on by police. He says: “The law makes a travelling man a criminal for living his own life. How is that fair? How is that justice? Society would prefer me to live in a house, but in four walls I’m a prisoner.”

Ed says: “It is weird that if you’ve got four walls and a bed, you’re a human being, and if you haven’t you’re treated quite differently. People are people and should live how they want to live.

“People don’t often realise that gypsies and travellers are an ethnicity, it’s a bloodline not a lifestyle. We should be more accepting.”

60 Days with the Gypsies is on Monday, February 7 on Channel 4 at 9pm.