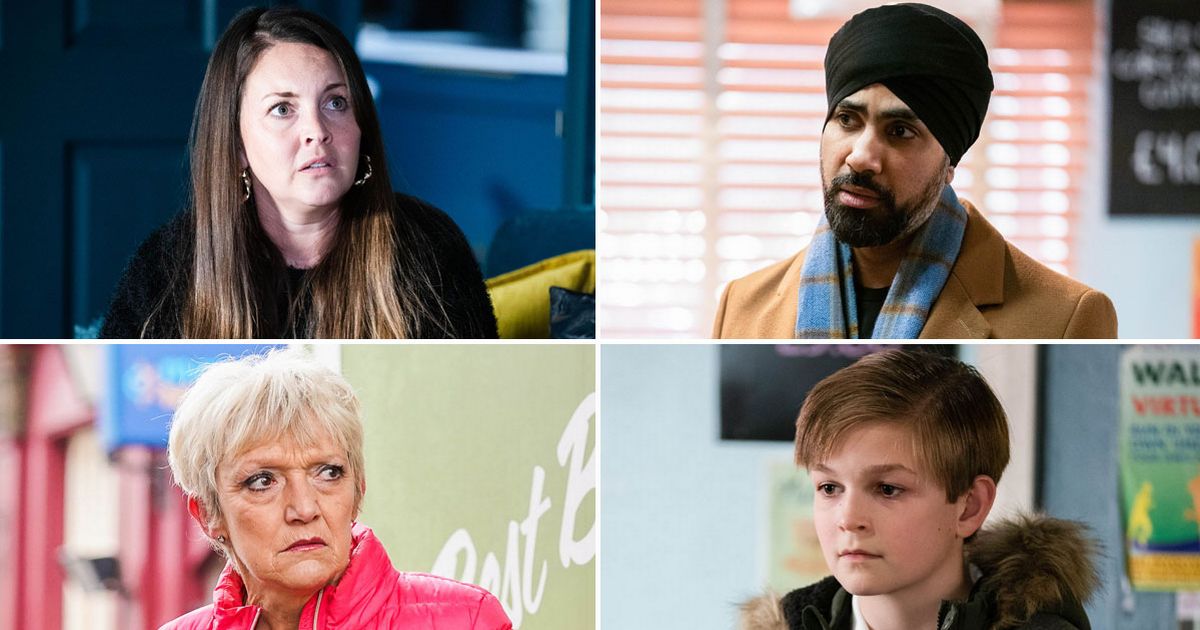 EastEnders’ favourite Jean Slater begins to unravel on the BBC soap next week, while daughter Stacey desperately tries to intervene and elsewhere Kheerat Panesar shocks those around him

EastEnders residents will next week wrestle with the unfolding aftermath of the dramatic comeuppance of serial killer Gray Atkins, who was finally arrested by the police.

But with Gray out of the way, Kheerat Panesar (Jaz Deol) is facing an uncertain future on the soap after the police finally caught up with him in the wake of his attack on Gray, which landed the abuser in hospital.

Meanwhile, Jean Slater is headed for a whirlwind week on the soap as she plans a surprise for little Arthur, but things don’t go to plan.

Here’s everything coming on the BBC soap next week…

Residents unite to free Kheerat as he prepares to plead guilty

With Kheerat in custody facing charges for the attack, the BBC soap will reveal his fate in upcoming scenes.

As his family rally around to help him, Suki (Balvinder Sopal) and Dotty (Milly Zero) are shocked to find out from his lawyer that Kheerat plans to plead guilty.

Kheerat’s fate will be revealed in upcoming scenes.
(

Suki begs the lawyer to find another way to help her son out of the nightmare, while Dotty also wants to help and goes to Sonia (Natalie Cassidy) to ask her for money.

Although initially reluctant, she convinces Sonia to part with the cash, which she takes to Eve (Heather Peace), asking for legal advice on Kheerat’s case.

Eve is surprised to be asked but agrees to help, but Kheerat’s situation threatens to get even worse when Eve makes a disturbing discovery about his lawyer.

Eve tries to do her best to find a way for Kheerat out of the crisis, but will Suki accept her help?

In scenes airing later in the week, Suki’s nerves jangle as she prepares for Kheerat’s hearing.

Nervous about the outcome, Suki takes it out on Eve. Later, Suki anxiously waits for news on Kheerat’s fate after the hearing – but what does the future hold for him?

Jean (Gillian Wright) plans a surprise for the kids in EastEnders, but Arthur (Hunter Bell) doesn’t get quite the surprise he was hoping for when he ends up injured.

Jean reveals she is planning a surprise for the children
(

BBC spoilers have revealed that Stacey’s (Lacey Turner) fears for her mum intensify as her behaviour becomes increasingly erratic.

Stacey has already addressed concerns that Jean, who has bipolar disorder, is having a manic episode but she is set to grow fearful of her mum’s welfare on the soap next week.

Stacey is alarmed when Jean reveals she is planning a surprise for the children and when she then pressures Stacey to tell Arthur the truth about Kush’s death – who was murdered at the hands of evil Gray Atkins.

Jean then later blocks the market by buying a bouncy castle for all the kids, leaving Martin concerned for her as well.

Stacey is humiliated when she sees her mum jumping away in the bouncy castle, only for the situation to go from bad to worse when Jean accidentally hurts Arthur, prompting an embarrassed Stacey to try and pull her off from the inflatable.

Stacey has already addressed concerns that Jean, who has bipolar disorder, is having a manic episode
(

Afterwards, Stacey goes to desperate lengths to try and help her mum and even bans her from being alone with the children until she sees a doctor, but Jean only goes to Kat to try and convince her capable of looking after the kids.

Jean then manages to slip out to the Tube station with Arthur, where she breaks the devastating news of what happened to dad Kush to the little boy.

When Stacey finds Jean and Arthur, she is horrified to discover what Jean told him and the pair become embroiled in a huge argument.

Desperately concerned, Stacey tries to explain to Harvey how Jean’s current behaviour is evidence that she’s experiencing a manic episode.

She becomes desperate to get Jean the help she needs and, against Eve’s advice, she pretends to be her mum to get a doctor’s appointment. How will Jean react when she finds out what Stacey’s done?

Upcoming scenes will see Tommy’s week take a dark turn when he watches a video of bully Sid making fun of him.

In the school playground, the bullies continue to taunt Tommy, but Isaac spots the commotion and breaks it up.

Kat is interrupted when Isaac arrives to tell her about the extent of Tommy’s bullying and Kat takes action, while Tommy realises he’s been set up by the bullies…

EastEnders airs these scenes in the week commencing Monday, March 21 on BBC One.