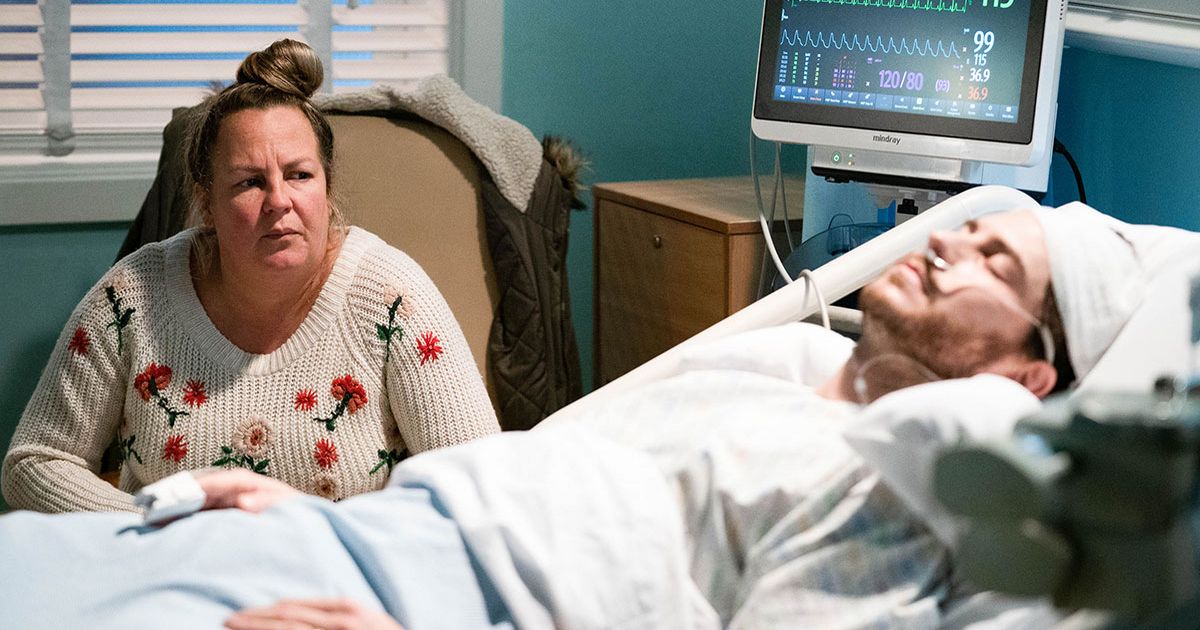 EastEnders ‘ Gray Atkins is set to regain consciousness next week on the soap after his violent showdown with Kheerat Panesar landed him in the hospital.

But the murderer finds he has woken up in a nightmare on the BBC soap, as he learns that a body has been found in Walford.

This comes after evil Gray (Toby-Alexander Smith) has fought to keep a lid on the gruesome secret that he killed Tina Carter and buried her body in the Argee Bhajee.

But his violent actions have begun to catch up with him, after Kheerat (Jaz Deol) launched a stealth campaign to troll Gray by posing as his dead wife Chantelle Atkins in the hopes of eliciting a confession.

However the plan dramatically backfired, as fans saw Gray lure Kheerat to a set-up where the two came to blows and Gray’s life was left hanging in the balance when Kheerat struck him with a bottle to the head.

As lifeless Gray lay on the floor, Kheerat panicked and fled, but BBC spoilers have now revealed that the evil abuser awakes in the hospital next week on the soap.

The drama kicks off on Tuesday, March 1, when Whitney realises she has finally made a breakthrough with Gray’s vulnerable wife Chelsea, who has been coerced by his expert manipulation as their son Jordan recuperated in the hospital.

But next week Chelsea shows she has made a break from Gray’s control, as she makes up an excuse to Karen about why she hasn’t visited him, despite the fact that he has still not woken from his attack.

Karen later visits an unconscious Gray in the hospital and as she mentions Whitney in a chat about the kids, Gray’s eyes flicker open.

Gray wakes in a state of confusion as to what has happened to him, unaware that Kheerat has packed his bags with the belief he could have killed him.

Chelsea shows she has made a break from Gray’s control
(

The BBC drama continues on Thursday, March 3, when the Carters are devastated when police call round to break the tragic news that Tina’s body has been found in the Argee Bhajee.

In later scenes, EastEnders fans will see the horrific aftermath of the news, as the Carters reel from finally learning what happened to vanished Tina – and the news begins to trickle out into the community.

Elsewhere, Chelsea is having a fun morning with Mack and Mia when Mitch tells her that Gray has woken up.

She immediately goes to visit her ailing and destructive husband at the hospital and tries to play off her absence, but Gray senses that something has changed and his effect has started to wear off – she has her confidence back.

The story continues on Friday, March 4, when the Carter family talk to the police and a suspicious Shirley makes a major confession to the police, which could be another step towards the undoing of evil Gray.

She tells the police officers that Gray had inexplicably said that he saw her sister Tina a few months ago on a bus.

Meanwhile, Gray is discharged from hospital and returns home, but is ominously disgruntled his recovery has had little fanfare from wife Chelsea.

He decides to turn his mind to other matters – until he sees a newspaper headline stating that a body has been found – hinting at the Tina discovery the Carters tragically learnt of.

A worried Gray heads to the café and questions Kim and Kathy about why the pub is closed but they are little help. What will Gray do when he finds out the body is Tina’s? And now the police have been given a major lead by Shirley, are the walls closing in?

EastEnders airs on Mondays, Tuesdays, Thursdays and Fridays on BBC One.