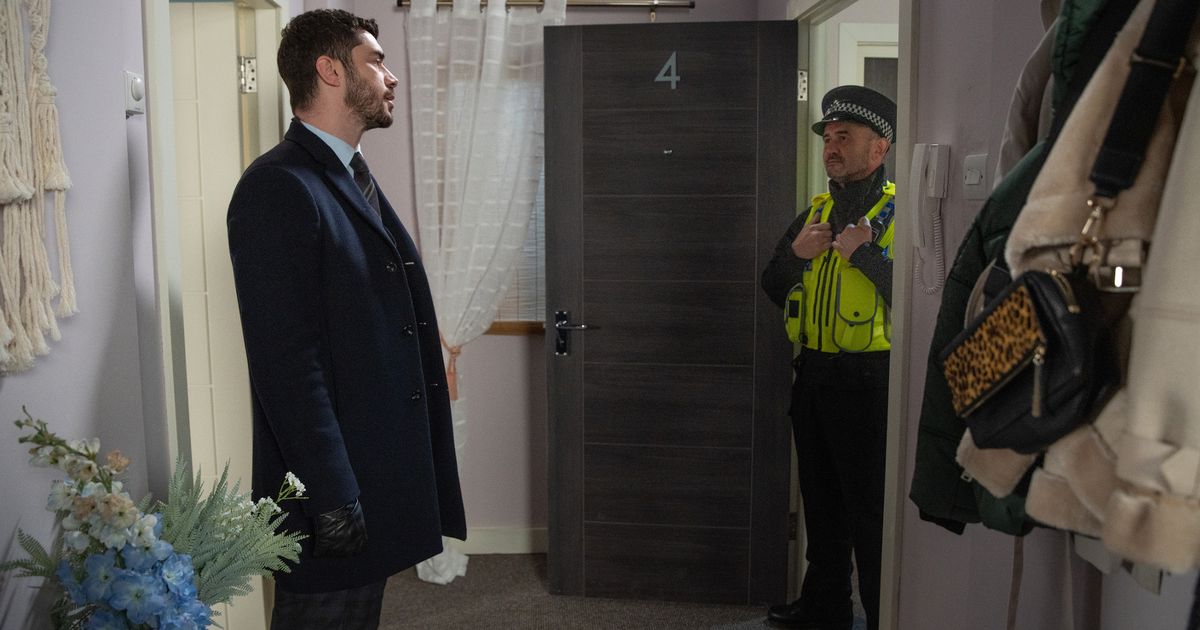 Coronation Street will bid goodbye to one resident after a misunderstanding sparks a tearful exit.

Yet when they discover the truth, will it be too late?

Meanwhile, another will continue to seek out her revenge by spinning of web of lies, which her (former) friend becomes tangled in.

As the police arrive, has she taken it too far?

Elsewhere, another resident is hellbent on self-destruction as she grieves for her relationship and dead son.

Here’s what’s coming up on Corrie next week…

Joseph Brown is set to part ways with his dad Chesney on the heels of his outburst to Chesney ( Sam Aston ) and Gemma Winters (Dolly-Rose Campbell), telling them he wants to move away with his gran Linda Hancock (Jacqueline Leonard) to Portugal.

The mum of late Katy Armstrong arrived on the cobbles unaware of her grandson’s recent vanishing act, which left dad Chesney fearing the worst as the police searched for the missing youngster.

Despite Chesney’s attempts to convince Linda that everything is fine with the family, it’s not long before residents fill her in on the recent drama surrounding Joseph.

Linda makes an effort during her stay to bond with Joseph, something which Chesney has not had time for of late as he raises quadruplets.

But Linda’s tentative suggestion to Chesney that Joseph move to Portugal to live with her permanently – pointing out the family challenges with raising five children – result in a furious Chesney ordering Linda to stay away from his son.

When Joseph then later eavesdropped on Chesney and Gemma’s conversation about him, he misunderstood and announced he wants to live with Linda in Portugal.

ITV spoilers now reveal that Chesney will be forced to part with Joseph after accepting he could have a better upbringing in the warmer climes.

Despite his feelings, Chesney tells Gemma that he should accept that Joseph’s gran can give him a better life in Portugal.

He then bites the bullet and tells Joseph that he’s prepared to let him move to Portugal with Linda, if that’s what he really wants.

Will Chesney be able to reach his son in time?
(

But Joseph is inwardly gutted, again thinking this is proof his dad doesn’t want him around.

In later scenes, Chesney meets up with Linda in the Rovers and tells her that she can give the youngster he deserves.

But the situation then accelerates after an emergency forces Linda to call in at No 5 with the news that she’s flying back to Portugal that night.

Still hurt from his earlier conversation with his dad, Joseph then says he will go with her – leaving Chesney and Gemma reeling.

As his son prepares to leave for the airport, Chesney is adamant he’s only got Joseph’s best interests at heart.

An emotional group of Chesney, Gemma, Bernie, Fiz, Hope and Ruby gather on the cobbles to wave Joseph and Linda off in their taxi.

Later on the soap, Fiz calls at No 5 and urges Hope to tell Chesney what Joseph said and she reveals that Joseph didn’t want to go to Portugal, but felt they couldn’t afford to keep him.

Chesney panics as he realises the massive error in the decision he’s made and sets off with Gemma for the airport in pursuit of Joseph – but will they reach him in time? And will he forgive them for letting him go in the first place?

Corrie fans watched as Emma and Faye Windass collided with elderly man Ted, after Emma agreed to take over from Craig Tinker as Faye’s driving instructor.

On New Year’s Day, tragedy struck as Faye drove Emma home from a party the night before and hit Ted.

The pensioner regained consciousness and said he was fine as the pair assisted him back to his flat, but he later died.

Guilty Emma went to Ted’s funeral, even though Faye had begged her not to, and met Jon there.

Emma will get close to Ted’s grandson
(

As Alexandra Mardell, who plays Emma, prepares to exit the soap after four years in the role, the tragedy could come into play as the cause of her departure from the cobbles.

ITV spoilers now reveal that Emma and Jon will grow closer after a chance run-in, but is forced to keep the blossoming romance a secret from Faye.

The drama kicks off on Monday, February 28 when Emma spies on Ted’s grandson Jon in Freshco’s car park as he collects the trolleys.

Although she thought she had watched him undetected, Jon later calls in the Rovers looking for Emma to tell her he spotted her.

Will Emma be able to resist Jon?
(

Jon admits to Emma that he’s thought about her a lot since his grandad’s funeral and suggests they go for a bite to eat.

Over dinner in Speed Daal, sparks fly between the pair and it’s clear Jon is totally smitten.

But later in the salon flat, Faye rails at Emma for going on a date with him and points out that Craig sacrificed his career as a copper for them.

But when Emma’s phone beeps with a text from Jon, will she be able to resist?

The drama continues later in the week on Friday, March 4, when Emma has promised Faye that she won’t see Jon again.

But when Jon later runs into Emma as she watches film clips on her phone, he suggests they have a night of Netflix and Chill together with a movie and popcorn.

Emma’s tempted, so will she go back on her promise to Faye? And if Jon discovers the truth of Emma’s involvement in his grandfather’s death, could their tentative cover-up fall to pieces?

Lydia Chambers will wreak more havoc in ex-boyfriend Adam Barlow’s life as she sets him up to the police for the second time.

The ‘bunny boiler’ schemer (Rebecca Ryan) has had it in for lawyer Adam (Sam Robertson) since first arriving on the cobbles, with fans learning she had mounted a stealth campaign to ruin his marriage with Sarah (Tina O’Brien).

Lydia has harassed Adam with repeated mystery phone calls, vandalism to his car and a Valentine’s Day bouquet of flowers with an ominous message attached – all to seek revenge for the way he treated her when they dated at university.

Adam added insult to injury when he refused to admit he remembered Lydia and she has now resorted to convincing his wife Sarah that he may be having an affair.

Lydia continues to meddle with Adam and Sarah’s relationship

In recent scenes, Lydia showed off risque lingerie from her mystery suitor, before tearfully later revealing to Sarah that his identity was supposedly Adam.

ITV spoilers now reveal that the drama escalates next week on the soap, with Lydia again getting Adam in trouble with the police after she previously provoked a police raid at his office.

The storyline picks up on Monday, February 28, when Sarah confirms that Lydia won’t be returning to work in the factory.

Adam calls in the factory and does his best to convince Sarah that Lydia’s an evil fantasist, but Sarah’s similarly disbelieving.

Later in the week on Friday, March 4, Adam again makes an effort to convince Sarah that Lydia’s telling a pack of lies.

Back at the flat, Sarah demands Lydia give her specific dates and times of when she supposedly slept with Adam.

Adam receives a call from the police

When Sarah then suggests the whole affair is a lie, Lydia shows her threatening texts and makes out they’re from Adam.

When Sarah points out they’re from a different number, Lydia tells her to call it and see for herself.

Sarah’s then left in shock when she dials the number and finds a phone ringing in Adam’s drawer.

When Adam later arrives back at the flat, Sarah is dumping his stuff outside, prompting him to call at Lydia’s in desperation.

Devious Lydia then spots a couple of passers-by and plays the victim, shouting at Adam in fear to leave her alone.

When she does open the door and let Adam in, he’s horrified to see she’s trashed her house in another elaborate bid to set him up.

As he pulls out his phone to call the police, Lydia tells him it’s too late and that they are already there.

Abi turns to drugs as Kevin throws her out

Abi Franklin hits rock bottom after husband Kevin Webster finally discovers her cheating and asks her to leave their home.

The bombshell looks set to tear the much-loved couple apart on the ITV soap, after Abi (Sally Carman) accidentally let slip about her affair with Imran Habeeb (Charlie de Melo) in front of Kevin (Michael Le Vell), leaving him devastated.

It all kicked off when the couple and Kevin’s son Jack decided to go on a trip in their camper van, amid drama surrounding Abi’s plans to adopt Jack.

After Abi urged pal Sally Metcalfe (Sally Dynevor) to keep her infidelity secret, amid threats to tell Kevin the truth, the affair accidentally came out as Abi’s phone was connected to a bluetooth speaker within earshot of Kevin.

Reeling in shock, he soon drives off, leaving the fate of their relationship up in the air until next week on the soap.

ITV spoilers now reveal the devastating fallout next week will result in Abi turning to drugs in a dark moment.

The drama begins on Monday, February 28, as Imran surprises Toyah (Georgia Taylor) with an engagement ring over dinner in the bistro.

Meanwhile, having spoken to Kevin, Debbie is forced to break delicate news about their marriage to Abi and takes her into the office for a chat.

She gently explains that Kevin wants her to have moved out by the time he returns home.

Abi is left reeling, so that when a delighted Toyah then shows off her engagement ring, she fumes and takes the new bride-to-be aback with her seething response.

The drama continues on Friday, March 4, when Abi begins to slide down a worrying slippery slope as her substance abuse issues come into play.

Abi tearfully packs her things before Kevin’s return to No 13 and then goes to Victoria Garden to knock back vodka.

As she scrolls through pictures of Seb, Toyah finds Abi as she hits the booze and urges her to go to a support group.

Abi agrees, but has no intention of doing so and only says it to shut Toyah up.

She then goes one step further in later scenes, when she introduces Toyah to Dean and makes out he’s her sponsor, supporting her in battling her addiction.

Toyah’s pleased, but out of her line of sight, Dean hands Abi a bag of drugs and the pair share a conspiratorial laugh at Toyah’s expense.

Is this the beginning of a dangerous downward spiral for Abi? And is her marriage to Kevin truly over for good?