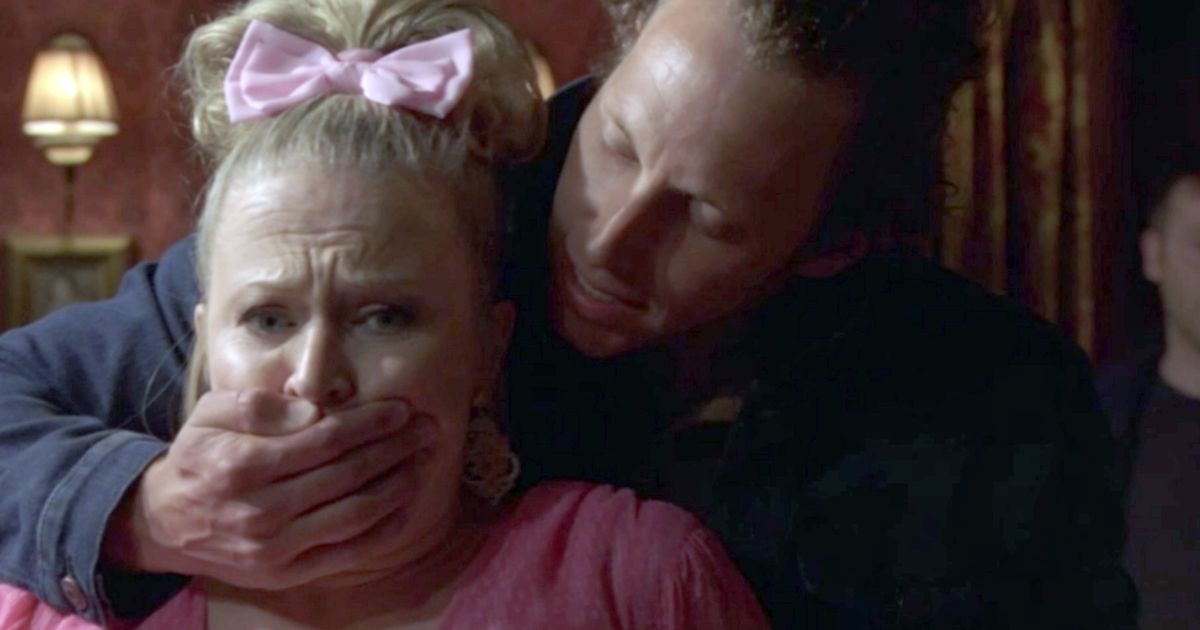 Pregnant EastEnders actress Kellie Bright, whose character is also expecting a baby, was grabbed during Tuesday night’s episode during a robbery at the Queen Vic – and fans quickly realised the attacker was actually her husband

The pregnant soap star, whose character is also expecting a baby, was grabbed during Tuesday night’s episode during a robbery at the Queen Vic.

Viewers were initially confused over the lack of social distancing between them as the robber wrapped an arm around the landlady and covered her mouth with his hand.

While soap characters have got close to each other in scenes before, it’s usually as part of a big storyline and have formed a ‘bubble’ in order to do so.

Yet fans later recognised the actor’s name, Paul Stocker, when the credits rolled and that it was Kellie’s husband, with one fan tweeting: “I thought I recognised the name of the thug who attacked Linda, it’s Paul Stoker, Kellie Bright’s husband!”

Kellie Bright’s attacker on EastEnders was played by her husband

It’s not his first time appearing on EastEnders – he had another small bit part in 2016 as DS Howard South, who had questioned Bobby Beale over attacking his adoptive mother Jane.

Paul has also appeared in 2007’s Atonement, alongside Keira Knightley and James McAvoy.

Other TV shows he has starred in include Doctors and Casualty, again in rather small parts from 2005 until 2017.

Kellie and Paul first met each other when they appeared in a play together when he was 24 and she was 31.

Prior to their wedding in 2014, the couple split for two months but have remained strong since.

The couple have two sons, nine-year-old Freddy and Gene, nine.

In March, Kellie announced that she was expecting a “miracle” third child after she and Paul underwent a frozen embryo transfer.

Kellie welcomed her first son Freddy naturally at the age of 34 before having IVF treatment for her second pregnancy after she and Paul struggled to conceive.

After Gene was born, Kellie made the decision to store three extra embryos for potential use later.

Following failed attempts at pregnancy with two of them, the third and final embryo became the couple’s third child.

Sharing her journey in OK! magazine, Kellie said: “It has nothing to do with the boys not being enough – they absolutely are. It’s just I never felt like I was done. I always had an itch, a desire to have more. My husband and I went round in circles for a couple of years deciding whether or not to just go for the third.

The couple are expecting their third child this month

“I have a demanding full-time job and the reality of having a baby and a toddler within all of that is overwhelming, and we weren’t quite ready. But I had such an emotional attachment to those embryos. I know they’re cells but they have the potential to be another Gene! I couldn’t let it go. Eventually, we decided to go ahead at the end of 2019… and then Covid-19 happened.

“I felt like the rug had been pulled out from under me. Suddenly, Paul and I were having conversations about not having more kids. Everything felt so uncertain. But by the end of the first lockdown, we did a complete 180.

“Having that precious time at home with our boys, doing simple things, we knew we had to try to make it happen. So we waited for the clinics to reopen and started a frozen embryo transfer, which is less invasive than the initial IVF and only involved implanting the embryos.”

*EastEnders airs Mondays, Tuesdays, Thursdays and Fridays in BBC One