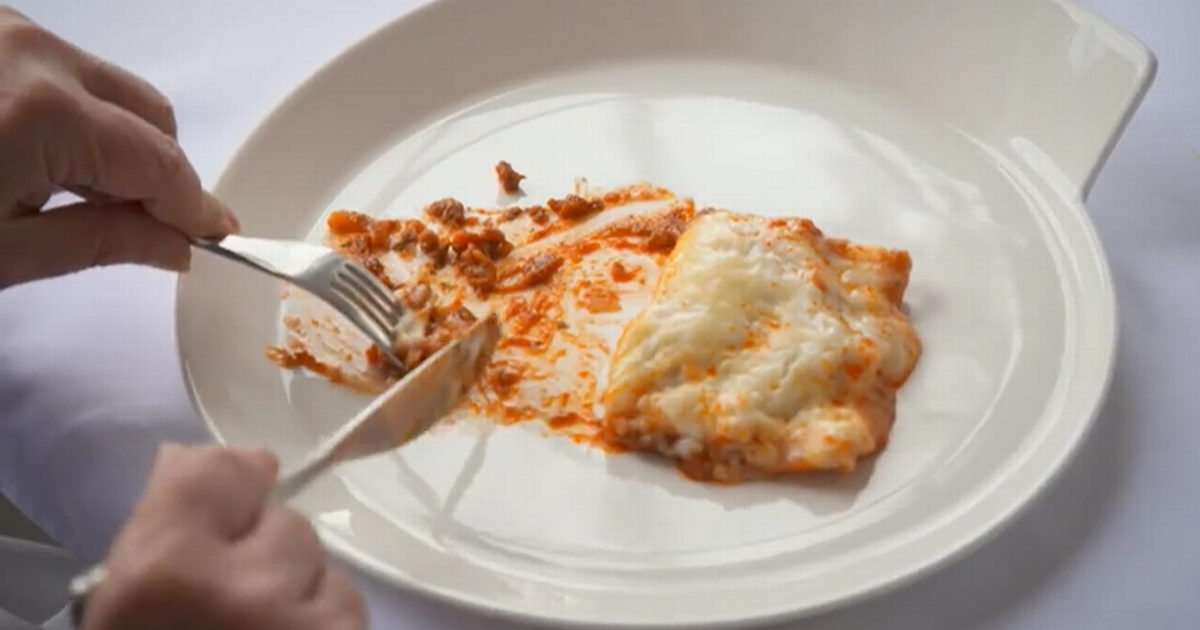 The second group ate the food with heavy plates and cutlery (

People were willing to shell out a total of £28 more than the asking price of a 69p ready meal thanks to some clever tricks.

The latest episode of Food Unwrapped explored the different elements other than taste which make food seem better than it really is.

Armed with the cheapest lasagne ready meal that they could find, they gave it to Joseph Usef, who works with scientists and some of the finest restaurants in the country to explore the “multi-sensory” elements of eating.

In a quick TV experiement, they had two groups to experience the same cheap microwaved meal.

Joseph said: “We’re going to try and elevate the flavouring experience with a few different sensory tips and tricks.”

Although the eight people in the experiment were given the same meal, they did not have the same experience.

The first group sat at a bare table with the meal coming in its cheap plastic container.

People who sampled it were less than impressed with one person saying: “The cheese doesn’t have any flavour. It’s a little bit rubbery.”

Another person said: “It’s a bit mushy for me.”

The first group were less than impressed by the 69p lasagne
(

The first group of four diners were asked to write down what they would pay for the experience.

Surprisingly people said they would pay around £3 for the meal, which is over the asking price.

Collectively they would have paid £6.62 over the odds for the dish.

But the second group were sat at a dining table with a dinner cloth, cutlery, expensive wine glasses and expensive crockery.

According to research, heavier cutlery will make people more inclined to pay for a meal and a white dinner cloth suggests formality.

Also, classical music was played while people ate for a phenomenon called “sonic seasoning” which is a theory that what you’re listening to has an impact on the flavour of the food you’re eating.

The comments from the second group couldn’t have been more different.

Another said: “It is very delicious.”

And another added: “It’s tastier than your average.”

But one diner didn’t seem overly impressed, saying: “I’ve had better. Not going to lie.”

Overall, the average price people would pay for the lasagne was significantly higher with one person saying they would pay £14.50 for their meal.

In total, the second group would have paid £28 over the base price.

Viewers were advised to bring the restaurant experience home and not watch TV as they eat as it may make the ingredients taste better.