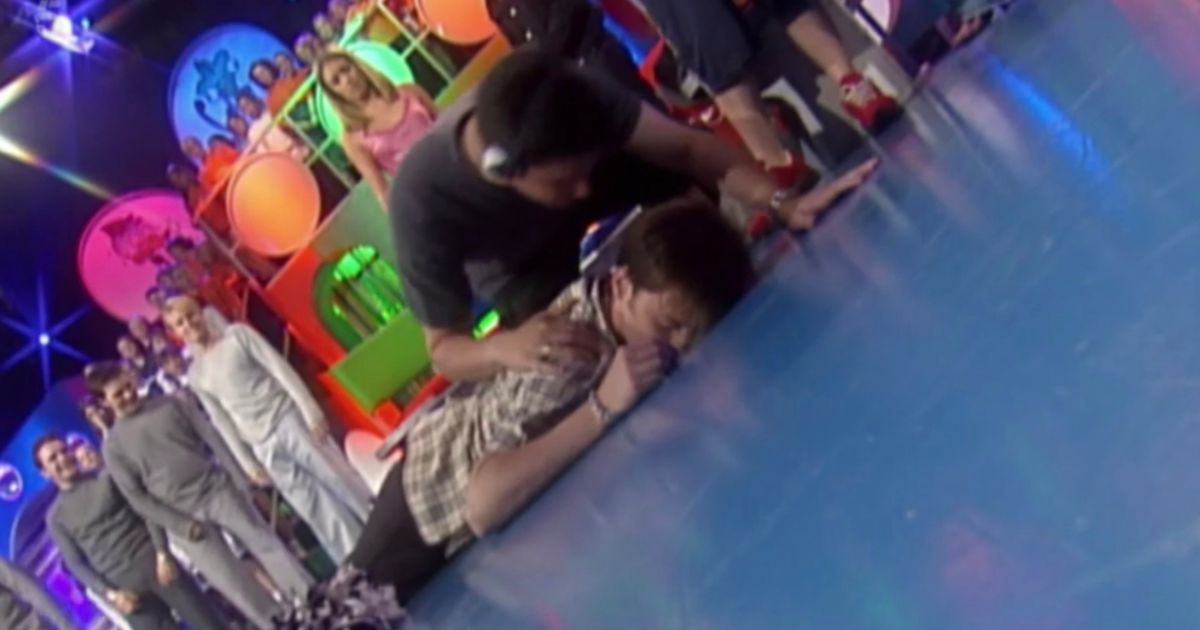 Declan Donnelly caused concern among viewers when he ‘fell to the ground with a mystery illness’ when presenting SM:TV Live, before reassuring fans it was an April Fool’s Day joke.

TV legend Declan Donnelly apparently ‘collapsed’ on live TV, surrounded by popstars, due to an ‘unknown illness’ in an unearthed clip from his time on SM:TV Live.

After concerned viewers rang the TV studio phone lines, Dec appeared following a short break, revealing the stunt had in fact been an April Fool’s Day joke, and winking at the camera.

The clip was aired during this evening’s show Ant and Dec’s 30 Greatest Moments, on Channel 5.

The Geordie presenter, now 45, was dancing with co-hosts Ant McPartlin and Cat Deeley, and the group were flanked by members of pop groups Westlife and B*Witched.

The star looked unwell before falling to the floor
(

Dec suddenly appeared unwell and unsure on his feet, before putting a hand to his mouth and falling on the floor.

In dramatic scenes, a crew member rushed over to tend to the star, while Ant momentarily continued with the show, before pausing.

Cat then shouted: “Can somebody get the nurse”, before the kids TV went off air.

A message then appeared on the screen, which read: “Sorry about the fault. We’re working to restore your programme as soon as possible.”

A crew member tends to Dec before the truth is revealed
(

Shocked viewers flooded the show’s phonelines with calls to raise their concerns.

However, seconds later, the programme returned and Dec appeared well, with a new segment beginning.

He told fans: “Something happened here in the studio. I just…I just keeled over. I collapsed. I wasn’t feeling too well.

“Thanks for all your calls of concern. There’s no need to be alarmed.

Dec then smiled and winked as the camera zoomed in on his face.

Ant and Dec’s 30 Greatest Moments looked back at highlights from the best pairs decades-long career in the entertainment industry.

Years later and Ant & Dec fans have been upset once more, as the pair’s Saturday Night Takeaway show was cancelled this evening, to make way for the Six Nations Live coverage, as France take on England.

Like Starstruck and Sunday’s Dancing On Ice final, ITV has dropped the latest episodes from schedule to make way for the rugby coverage.

While some viewers totally forgot about the change to listings and were “gutted” to tune in to something that obviously wasn’t Ant and Dec, others knew full well but decided to air their annoyance anyway.

Taking to Twitter, one fan commented: “It’s Saturday. It’s 7 o’clock – and we are bored in the living room because #SaturdayNightTakeaway isn’t on tonight.”

A third added: “Saturday night is c**p this week. We need you both!!” as another said: “Missing #SaturdayNightTakeaway already and it’s been three minutes since it was due to start.”

Saturday Night Takeaway tickets: How to apply to be in the audience of Ant and Dec’s show