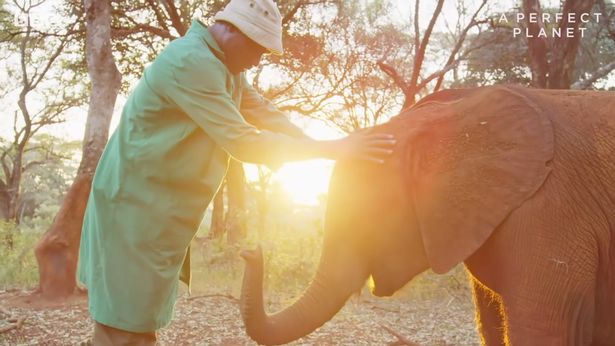 Sir David Attenborough could shock viewers into action after sharing distressing footage of animals suffering as a consequence of human life.

The 94-year-old broadcasting legend tells viewers of his new BBC show that the world has changed “beyond all recognition” over the space of his lifetime.

Five-part documentary A Perfect Planet begins airing today with unsettling footage showing animals across the globe struggling to survive in the line of global warming.

Among one of the upsetting scenes is a baby elephant crying out as rescuers give it water – after the animal’s adult relatives perished in extreme droughts, leaving the baby psychologically damaged.

He says: “These extreme conditions are making it increasingly difficult for animals to survive.”

While economist and activist Jeremy Rifkin adds: “This is the single most serious moment in the 200,000 years our species has been on this Earth.

“We will face a runaway cascade of environmental events feeding off each other, taking us into an unknown abyss that could lead to a very quick mass extinction of much of life in a very short period.”

Projects hoping to turn the tide against climate change include a 5,000-mile long “green wall” consisting of one billion drought-resistant trees which are being planted in Africa.

While a “frozen zoo” featuring DNA of 10,000 endangered animals is documented which hopes to clone animals in the future.